Here’s another recipe that was requested on my Facebook page: vegan pizza.

I know, I had the same reaction when I first saw the suggestion – I adore cheese, why on earth would I want to make a vegan pizza?

But, you know I love to experiment with different types of food, so I thought I’d give it a go. To be honest, it is a bit of a cop-out to just heap everything with cheese, so I thought it would be a nice challenge to find a way to make a vegan pizza so tasty that even I wouldn’t miss the cheese.

And I’d call this a resounding success!

Now, you can’t just take the cheese off a pizza and expect it to not lose any flavour. Instead, you need to find ways to make each part of the vegan pizza extra tasty.

So first: the base.

I’ve made homemade pizza crusts in the past, but it’s not something I do regularly, so this time I decided to use a good quality, shop-bought flatbread as my base. I used a tomato flavour flatbread, since I thought it would give my vegan pizza an extra hit of yumminess, but you can use whatever kind catches your eye – or use a homemade crust if you prefer.

Next up, the sauce. Rather than going for the usual tomato-based sauce, I used some black olive tapenade – it’s got masses of flavour, and makes a really nice change. If you use a shop-bought tapenade, make sure you double check that it’s vegan, as some contain anchovies. And if you’re having trouble finding a vegan version, you can just use homemade tapenade instead – it’s really easy to make!

Now come the toppings. Rather than just throwing on some random vegetables that may or may not end up being tasty, I chose pizza toppings that I knew would give loads of flavour to my vegan pizza.

Cherry tomatoes – which roast as the pizza cooks and get nice and sweet and juicy.

Corn – which I charred a little in a griddle pan to give it extra flavour, before cutting it off the cob in big slabs.

And, after the pizza had baked, I also added some peppery rocket on top. It brings a lovely crisp freshness to the pizza (not to mention it’s really pretty!).

So, what do you think – have I convinced you that vegan pizza can be just as tasty as the cheesy version? I must say, despite my initial reservations, I was utterly convinced. I’m definitely not going to give up cheese forever (pigs might fly), but it is great to be able to make tasty dishes that don’t rely on cheese for flavour!

Feel like making your own pizza dough? My beery pizza crust is one of my favourites: 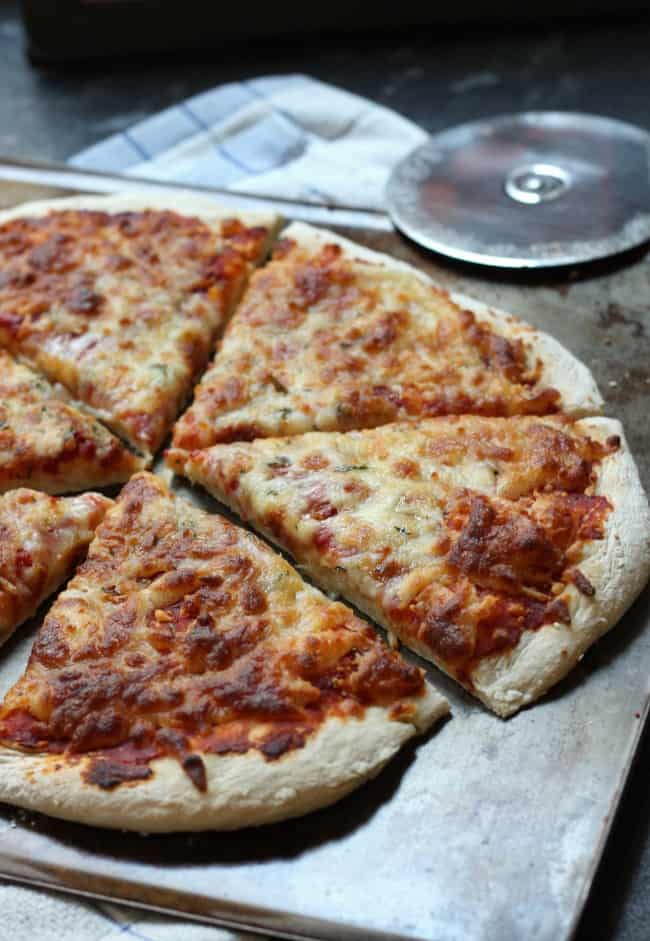 Corn is my all time favorite food, but it has never occurred to me to put it on pizza! I cannot wait to try this. Life changing!!

Really!! Corn on pizza is very common in the UK! You need to come here and eat alll the pizza ;)

I either use flatbread or I just use large tortillas and eat two of them :) Two tortillas with spaghetti sauce and tons of veggies is still only around 400 calories, but very filling and very healthy. And, yes, I use artichokes a lot as they're amazing on pizza. Nice recipe, btw.

Kathy @ Beyond the Chicken Coop

This pizza looks great. Such a different, fun twist than the regular ol' pizza!

I cannot believe that I am excited to make a non-cheese containing pizza. This looks so fantastic, thanks Becca!

I absolutely love artichoke and am not a fan of meat on pizza, so this really appeals to me x