221shares
My boyfriend’s working late a few nights this week, which immediately excites me because it means I can cook things that he wouldn’t like. Of course I’m sad not to see him in the evenings, but you know… sometimes lentils are more exciting than my boyfriend.
(I hope he doesn’t read this)
So, lentils. Most meat-eaters immediately turn their noses up at lentils because they sound too ‘vegetarian’, or something equally ridiculous. I bet half of them haven’t ever even tried lentils. It’s only been in the past year or so that I’ve started cooking with them, but I’ve fallen in love. They’re so easy to use, and you can get so much flavour from them, even just by simply boiling them in a bit of veggie stock.
Or, you can do something slightly more adventurous… 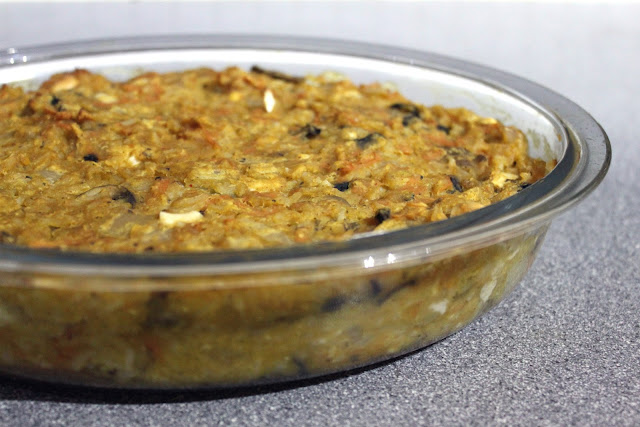 I really wanted to say that yesterday’s leek and potato gratin was my favourite recipe of the week, because it was amazing, but I knew that if I did that, I couldn’t say the same for this. And really, this was my absolute favourite. I’ve said that this recipe serves 2-3 – if it were any other recipe I’d say it easily serves 3, but I couldn’t stop myself from going back for seconds, so it only made 2 portions for me. Whoops. 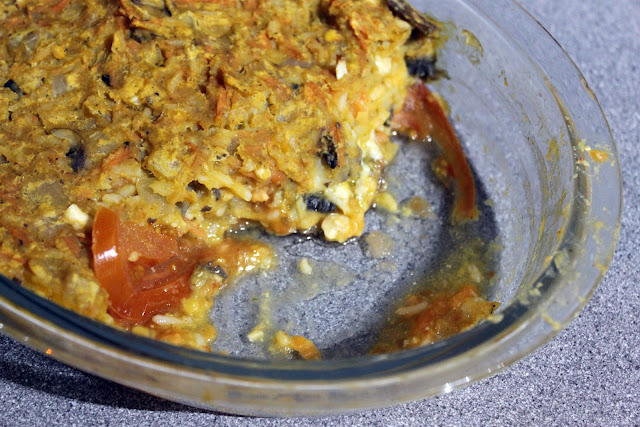 The cheese and tomato in this dish stops it from drying out like many lentil bakes do. I often find lentil loaves a little dry (but still delicious!), but this one required no sauce or anything alongside it. If you’re a vegan, you could easily skip the layer of cheese, and the dish would still be fantastic. You could maybe add an extra layer of tomato instead so you still get the moisture.
I had mine with a little bit of garlic bread… yum. 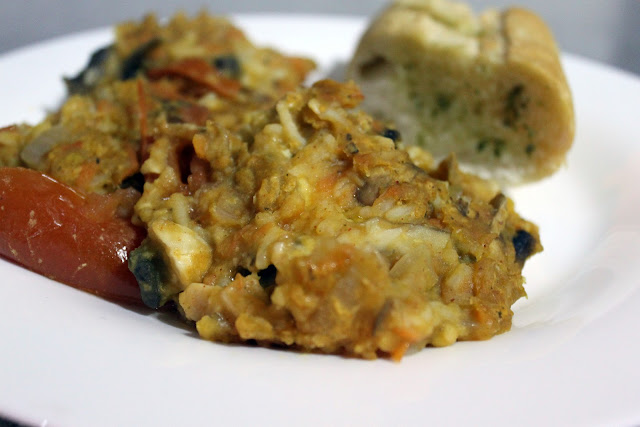 Is it bad that I’ve eaten this for the last two nights, and I kind of want to make it again this evening? Must. Stop. Myself. 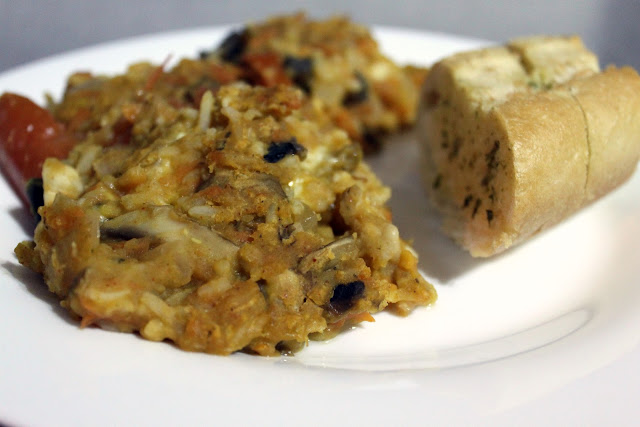 Anyway, I think you get the picture by now – that this was really good, and that you must make it. Don’t be put off if you’ve not cooked with lentils very often, because it requires approximately no skill to work with them. Just stick ’em in a pan with some water and you’re pretty much there.
Easy cheesy lentil bake
Serves 2-3
75g red lentils
50g white rice
1 vegetable stock cube, made up in 500ml boiling water
1tbsp sunflower oil
1/2 onion, diced
2 cloves garlic, minced
100g mushrooms, diced
1 carrot, grated
1/2tsp dried sage
1/2tsp paprika
1/2tsp hot chilli powder
50g cashews, roughly chopped
2 large tomatoes, sliced
50g grated cheddar cheese
Boil the lentils and rice for 15-20 minutes in the vegetable stock, stirring occasionally, especially during the last 5 minutes to ensure they do not stick to the bottom of the pan. Once they are cooked, do not drain the water, but instead, continue stirrinng over the heat until enough water has boiled off for the mixture to resemble thick porridge.
Meanwhile, heat the oil in a frying pan and cook the onion, garlic, mushrooms and grated carrot for 10 minutes. Add the sage, paprika and chilli powder.
Add the cooked vegetables and the chopped cashews to the lentils, and mix well.
Heat the oven to 190°C (Gas Mark 5 / 375°F).
Layer the sliced tomatoes in the bottom of a baking dish (it does not matter if they overlap), and then top with half of the lentil mixture. Add a layer of grated cheese, and then the remaining lentil mixture. Press out the mixture to the edge of the dish, and smooth the surface. Bake for 30 minutes, until a slight crust forms on top.
221shares
Dinners