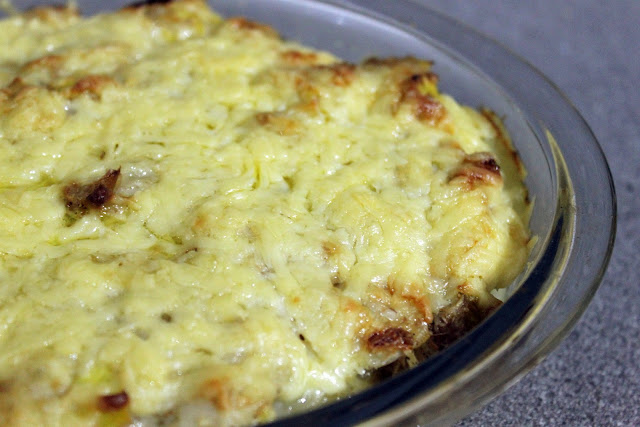 According to trusty Wikipedia (which is never, ever, ever wrong), a gratin is ‘an ingredient is topped with a browned crust, often using breadcrumbs, grated cheese, egg and/or butter’… now I don’t know about you, but that sounds pretty perfect to me. There’s nothing better than crispy melted cheese, I don’t even need to bother with the rest of it. And lurking below the surface… 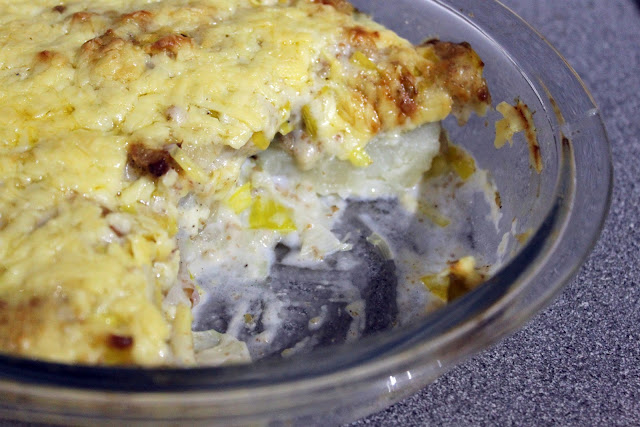 Creamy leeks and layers of soft potato. Now, this may look like a massive bowl full of calories, but it’s not as mad as you may expect. Whereas most gratins use lots of heavy cream, butter and cheese in the sauce (drool), I made a simple white sauce (wholemeal flour and everything!), so the creaminess is created by just a touch of butter, and semi-skimmed milk. Therefore I fully recommend that you eat this entire dish with a spoon, and feel no guilt whatsoever. 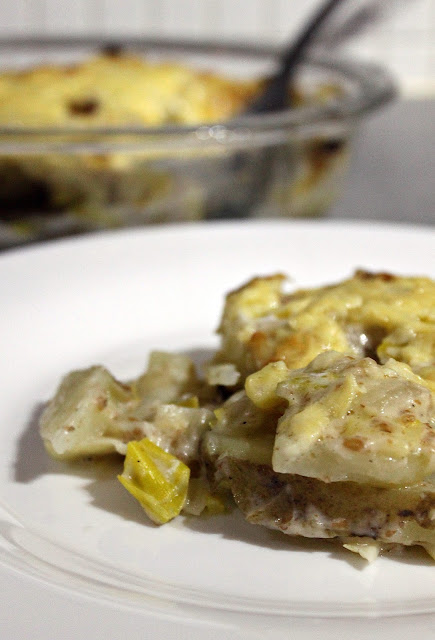 Mine looks a bit speckledy because of the wholemeal flour, but you could use plain flour if you wanted. You couldn’t even tell that I’d used wholemeal though (other than by looking at it), so I’d recommend going for that option if you can. May as well go for the healthy option when you can, right? 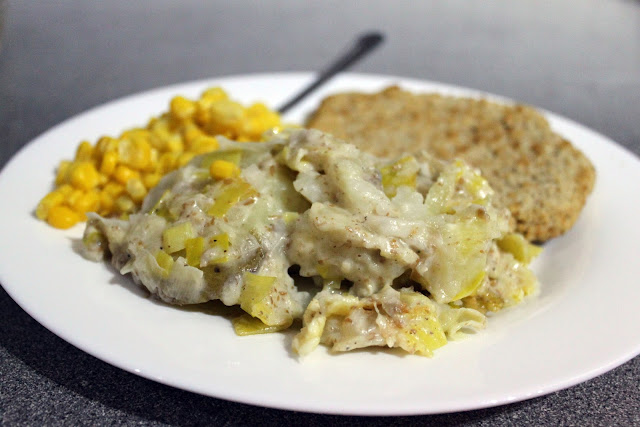 I served my portion with a Quorn escalope (gotta have a bit of protein), and a big pile of cold sweetcorn. I love sweetcorn. You probably haven’t gathered this yet because I don’t cook anything fancy with it very often, but sweetcorn is pretty much my go-to vegetable when I can’t be bothered to cook. If it wasn’t for this blog I would add it to everything I cook. It’s literally the best vegetable there is. Yes, I said literally, and I meant it.
Leek and potato gratin

Wash the potatoes thoroughly, peel if you want to (I didn’t), and chop into 1cm slices. Boil for 10 minutes, or until tender but not falling apart. Drain and set aside.

Meanwhile, top and tail the leek, and remove the outermost layer. Slice in half lengthwise, wash thoroughly, and then chop into 1cm slices.

In a large frying pan, heat the oil, and add the leek and onion. Cook over a medium heat for 5-10 minutes, until the vegetables are soft, and then stir through the nutmeg. Season well with salt and black pepper.

Push the vegetables to the edge of the pan, leaving a gap in the centre. Add the butter to the centre, and once it has melted, add the flour and stir (it doesn’t matter if some of the leek gets caught up in the flour mixture). After about a minute, and once all the dry flour has been incorporated, begin adding the milk bit at a time. Stir well before adding more, getting rid of any lumps of flour. Gradually incorporate the leek and onion back into the sauce until the mixture is creamy and well-combined.

Transfer around a third of the leek mixture into the bottom of a baking dish, and add the slices of potato in one or two even layers. Top with the remaining leek mixture. Pour over a dash more milk if the mixture seems too thick – otherwise, just top with the grated cheese and bake for around 20 minutes, until the cheese is melted and beginning to brown.
Goat's cheese and tomato frittata
← Previous
Easy cheesy lentil bake
Next →
Click here to cancel reply.

btw, you have a happy follower now ;-)

Thanks! Glad you found me :)

Hi! First time on your blog space and I was pleased to see that your latest post happened to be one of my favourite! It looks perfect for a week night dinner. The close up shots are making the dish look so inviting :)

This looks so good. Love it.