19shares
Have any of you ever written a book?
Last year (it seems so strange to say ‘last year’ when I actually mean a couple of months ago) I participated in NaNoWriMo, where you have to write a 50,000 word novel in the month of November (1,667 words a day). I was successful, and yesterday I finished all the editing after having a few weeks off over Christmas. So I can now officially say that I have completed a novel! It’s fairly short (would probably take around 4 hours to read), but I’ve done it nonetheless, and can now tick it off my non-existant bucket list!
The problem I’m having is coming up with a title – it’s hard to sum up a whole book into one catchy phrase! If there are any budding writers out there, how do you come up with names for your books?
Writing over 1600 words every day can be time consuming, so here’s a recipe that’s quick to whip up (I’m noticing a trend in my recipes – lazy? me?), and really tasty. 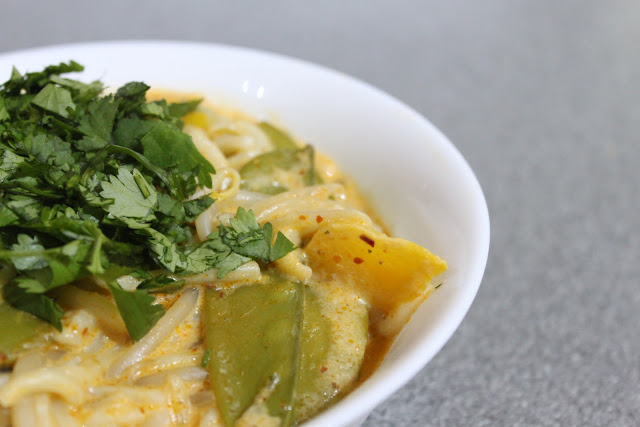 Topped with a big bunch of fresh coriander, this soup is fresh and light, but can easily be made more filling by adding more noodles. It could also be stretched out by watering it down a little, since the version I made is pretty chunky and full of beansprouts, mangetout, peppers and noodles.
I really like using Thai curry paste – someone else has already done the hard work mixing spices, so why should I bother? I wouldn’t want all their hard work to go to waste.

Serves 2
1tbsp sunflower oil
1 onion, sliced
1 pepper, sliced
100g bean sprouts
100g mange tout, halved
4 large mushrooms, sliced
2tbsp red Thai curry paste
400g tin coconut milk
250g egg noodles (I used straight-to-wok noodles, but dried ones would probably work too)
Black pepper
Handful coriander, chopped
In a large wok, heat the oil and soften the onion. After a couple of minutes, add the remaining vegetables and the curry paste. Continue to cook for 5 more minutes, until the vegetables are softening.
Add the coconut milk and the noodles, and season to taste. Allow to simmer for 5-10 more minutes (maybe a little more if you are using dried noodles). You may need to add a dash of water if you feel that your soup is not runny enough.
Serve hot, topped with the fresh chopped coriander.
19shares
Dinners Soup