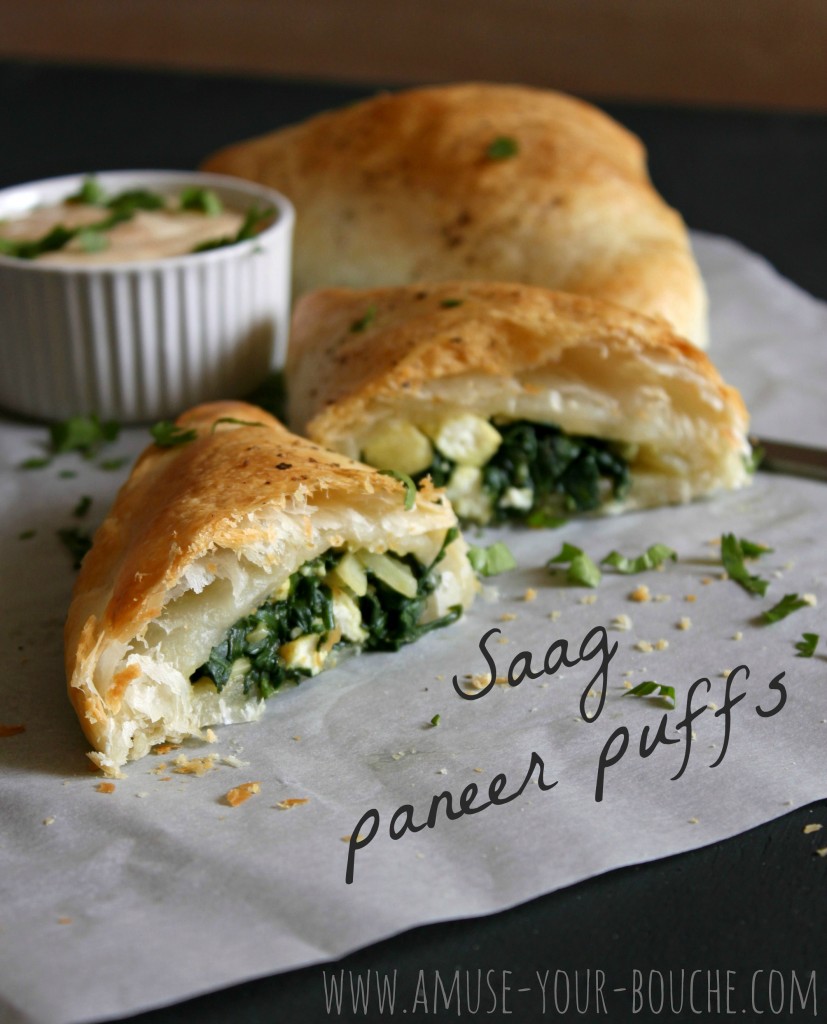 Has anyone noticed just how predictable my posts are? If I use half a packet of something in one recipe, you can be pretty certain that the rest of it will appear in a dish a few days later. The paneer in these saag paneer puffs (or is it palak paneer? I’ve never been too sure of the difference) was left over from the Indian style paneer pizza I posted a couple of weeks ago. The spinach was left over from my spinach and goat’s cheese muffins. The sour cream in the mango dipping sauce was left over from my mushroom stroganoff. Honestly, if you wanted to (although… I literally can’t think of a single reason why you would want to), you could sit down and figure out exactly what ingredients will be appearing in my next post. I hate throwing anything away, so everything gets used in a recipe at some point. 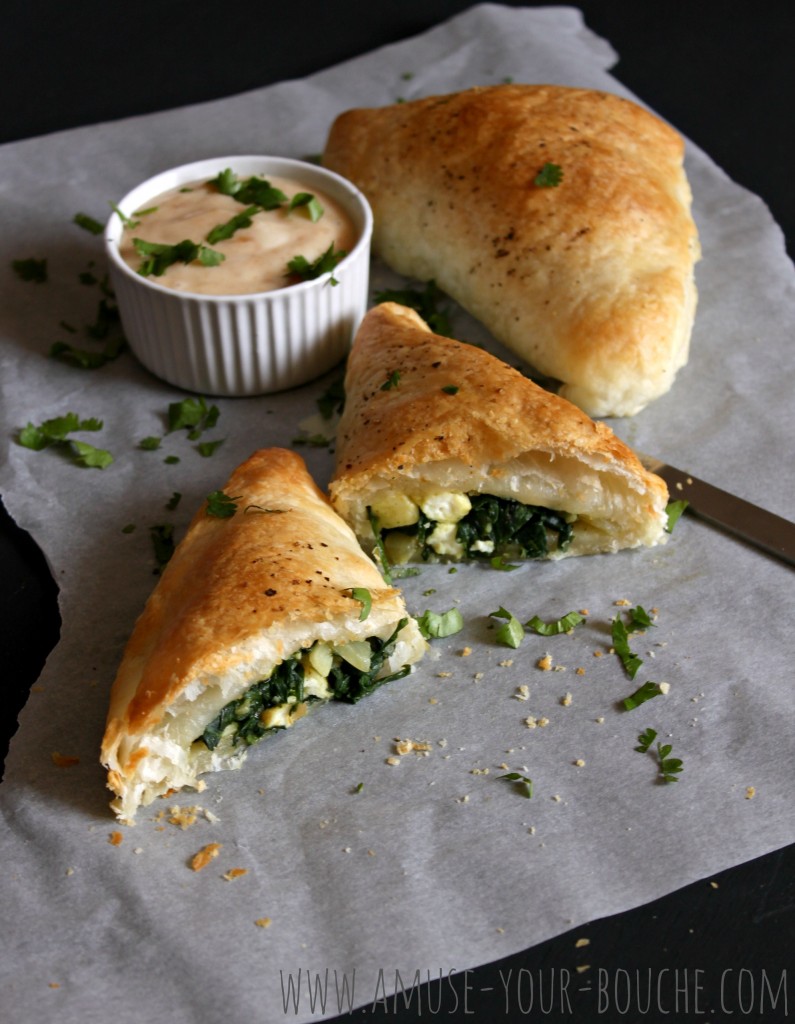 Also I’ve just realised that I seem to have developed an obsession with throwing herbs everywhere. Three out of the last four posts have been strewn messily with chopped herbs. Whoops. I guess I need a new way of making my photos pretty. Suggestions are welcome! Perhaps I should start drizzling things instead? 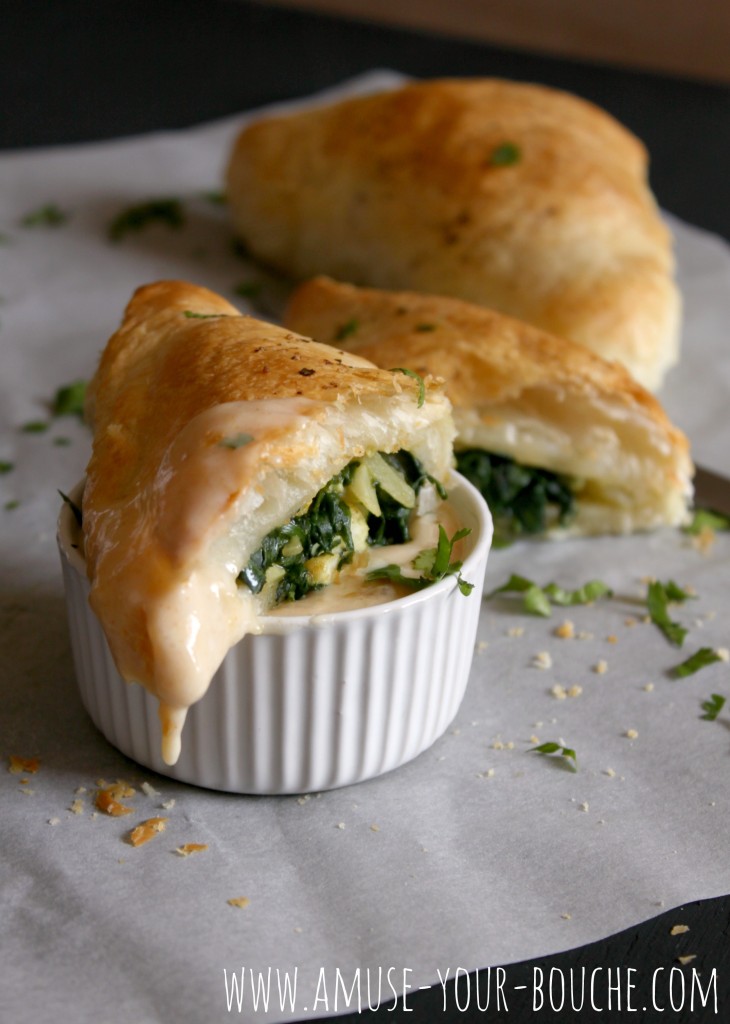 Anyway, yes. Sorry. As I mentioned the other day, saag paneer is pretty much my go-to Indian dish, so when I saw those two ingredients sitting happily alongside each other in my fridge, I knew it had to be done. Then I saw the pastry, and I got all confused because there’s no way I can turn down pastry, but… I wanted the saag paneer too. Hence, saag paneer puffs! Just make up your saag paneer like normal, ensuring it remains fairly dry so you don’t end up with soggy pastry, and then wrap it up and bake. Make sure you don’t skip the mango dipping sauce! It takes these puffs from good to great.

To see a video explaining how to fold your pastry into the triangle shape, see here.

I had bought some puff pastry cups that I couldn't use because I found them too small for the filling and they ended up being dry. Yesterday I thawed some of them and then rolled each individual cup into an oval (two rolls with the rolling pin was all it took to make a lovely thin piece of pastry) I then put some filling in the middle and pulled the sides together (wet the edges first) like a dumpling. I baked them at 400deg for 20 mins and they were perfect - I made them with apple but today I will try with pureed parsnip or some other purees - I will try your mango sauce with them as it sounds delicious.

This recipe looks amazing, but I am at a loss about how to fold up the triangles. I rolled out and cut my puff pastry into 4 segments and then tried to roll over as triangles, but they ended up turning into ovals. Would you be able to post a photo of how you did it? I also made the error of using warm filling instead of letting it completely cool, and therefore the pastry was much more difficult to work with.

Hi Laura! Here's a very crude drawing I just did for you - https://www.amuse-your-bouche.com/wp-content/uploads/2014/07/how-to-fold-a-samosa.jpg.jpg.jpg

Turns out it's really hard to describe, but just have a practise with a bit of paper first - once you've figured it out it's actually really easy! :)

These look delicious! And I can totally understand not wanting to throw anything away, I'm always trying to find new weird and wonderful ways to use up leftover bits and pieces. Lucky it's now soup weather as that solves a lot of the problems! Very glad I have stumbled across your blog!

Oh god, these sound so delicious.

mmm this looks so light, fluffy and delicious! all with that mango sauce, perfection!