A super easy copycat recipe for the Five Guys cheese veggie sandwich - one of my favourite vegetarian fast food options ever!

People are always surprised when I want to go to Five Guys for lunch, as burger places aren't generally known for their vegetarian options. But honestly - the Five Guys cheese veggie sandwich is the best. Seriously (and no, this isn't a sponsored post!).

Here's how to make it at home!

If you're not familiar with Five Guys, it's basically 'just' a burger place. The menu is really quite limited - they do a few hot dogs and a few sandwiches, but it's 90% beef burgers.

I know - it sounds a bit rubbish for vegetarians. So why do I love the place so much?!

Because, even though there's not much choice, the cheese veggie sandwich is good enough to make me want to go there for lunch every single day (if only there was a location nearer me...). It's delicious.

The cynic in me thinks that the veggie sandwich was added to the menu as a bit of an afterthought - "What do we have that's vegetarian? Oh, a few veggies, yeah those will do" - but luckily, it works so well that I will completely forgive the oversight. I'm happy to always be an afterthought if I end up with something as enjoyable as the Five Guys cheese veggie sandwich.

So, what's in the cheese veggie sandwich?

It starts with onions, mushroom and green peppers.

Fried in butter so they're unbelievably tasty.

Pile it all up in a toasted sesame-topped bun.

And then add whatever extra toppings you like (there are 15 to choose from on the menu!).

The end result is delightfully messy, buttery, gooey and delicious.

How to make a Five Guys cheese veggie sandwich

As you can probably tell by now, this sandwich isn't complicated.

It's easy to replicate at home - just make sure you don't forget those extra little touches that make it taste extra special, like a proper fast food burger.

Extra little touch number 1: Cooking the vegetables in butter. It makes them taste so special.

Next up, the bun! Use a sesame-topped bun, and make sure you toast it first.

In the Five Guys restaurant, they toast their buns on the flat griddle top, so that's what I did - I just popped it cut-side down in a frying pan until it was golden brown and crispy.

Then add plenty of ketchup and mayo, or whatever other condiments you like (hot sauce, mustard, BBQ sauce, whatever).

Add the buttery fried vegetables, and top with 2 slices of American cheese.

Okay, the elephant in the room: American cheese isn't the best cheese in the world. It comes in little individually wrapped slices, and probably makes the French weep. It's surely too bendy to be considered 'good' cheese?

However, I am the furthest thing from a food snob, and I personally think there's a time and a place for everything. And if a homemade version of a burger from an American fast food chain isn't the place for American cheese, I don't know what is.

As the cheese melts down over the hot, buttery vegetables, it becomes ooey gooey, and it just works beautifully. So even if you're not a fan of American cheese, give it a try! This cheese veggie sandwich might just convert you.

And finally, the toppings!

Everything on the Five Guys menu can be customised with your choice of 15 toppings.

There's a lot to choose from, but a few of them are condiments, and a few of them exist in our cheese veggie sandwich already, so it's perhaps not as extreme as it seems.

Choose whatever extra toppings you fancy, and sandwich it all inside your burger bun.

What toppings can you get on a Five Guys burger?

Your choices of toppings are:

I added some lettuce and sliced tomato, plus the ketchup and mayo you saw before.

How to serve your Five Guys cheese veggie sanwdich

Pop the lid on your burger bun, and serve it with some style skin-on fries.

Five Guys also offer Cajun-style fries (tossed with garlic, salt, onion, paprika, oregano, white pepper and red pepper), so if you have some Cajun seasoning in your cupboard, add that too.

And for the real Five Guys experience, wrap your burger up in foil for a minute or two before serving. Yes, it does make the bun a little on the soft side, but I actually really like that - and it also helps to melt the cheese, so the whole thing is gooey and irresistibly messy. 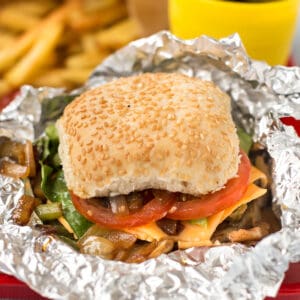 A super easy copycat recipe for the Five Guys cheese veggie sandwich - one of my favourite vegetarian fast food options ever!