Holy productive day, Batman! I know today is meant to be the end of the world and all, but I’ve still done loads today. Well, loads compared to watching nineteen episodes of 90210 as I would have liked to do, anyway. I’ve done some laundry, taken my car for its MOT (which involved walking across town in sub-zero temperatures, so that was an achievement in itself), annnd I went swimming! This is totally not normal behaviour for me. I swam 1.2km! I figured I may as well get started on my new year’s resolutions a little early.

Anyway, I definitely worked up an appetite, and if it wasn’t for the fact that I actually made this pie a couple of weeks ago, I would have had no problem coming home and finishing off the whole lot. This pie is gooood. 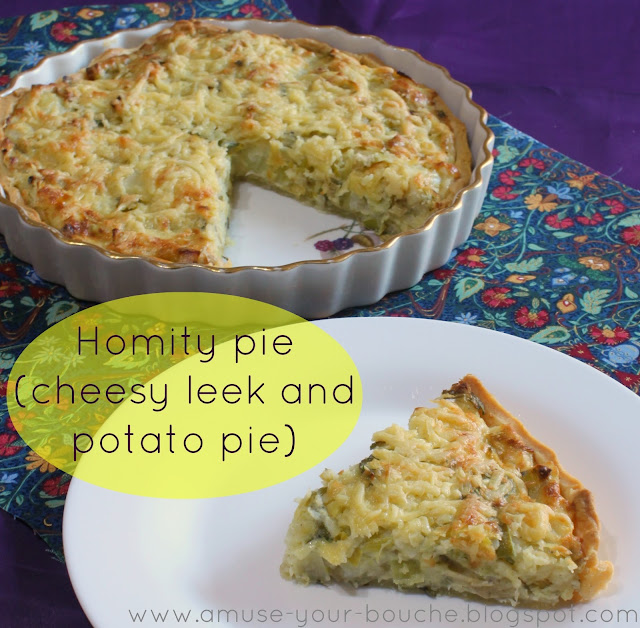 Homity pie is a traditional British pie, and like many British recipes, it originated due to the fact that us poor Brits couldn’t afford anything else. The advantage of this now is that it’s nice and cheap to make (I realise that saying ‘the advantage of it being cheap is that it’s cheap’ doesn’t make much sense. It sounded better in my head).

As you can see, I went the ‘rustic’ route with my pie crust (also known as the ‘I’m not very good at this’ route), but feel free to make yours a bit neater. I also didn’t make my own crust, because I’m not too good at anything that even vaguely resembles baking. If you are, go for it. 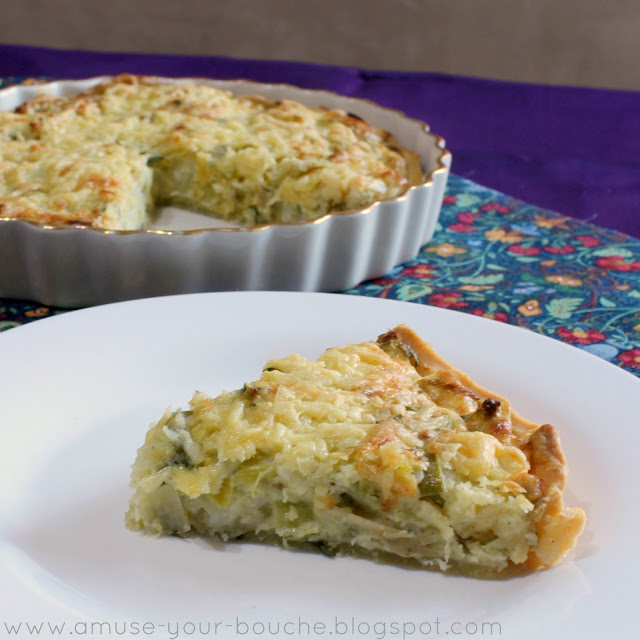 There’s not really much you can do to ruin this pie, so I highly recommend making it. The Christmas period already consists of eating far too much, so why not add a pie to the mix? Come January, you might not allow yourself to. 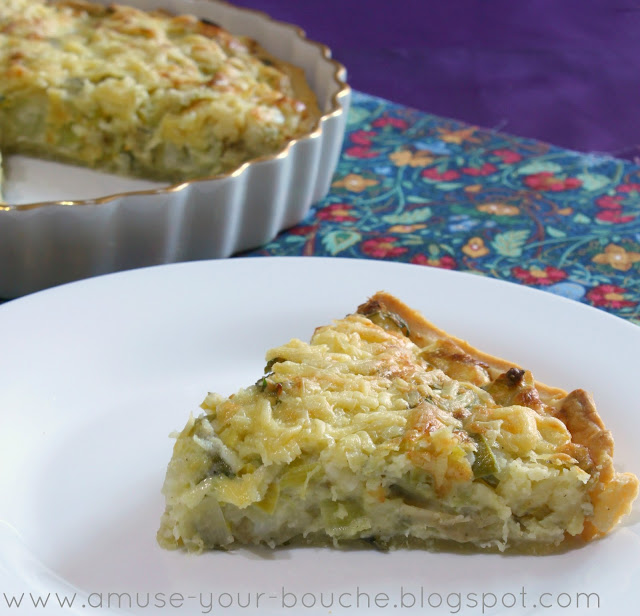 By the by, my boyfriend’s band Man Get Out (notice the foodie reference in the name?) have a new single out, if you’ve not listened to it yet then you can do so here! It’s pretty fab.

But enough about that, go and eat some pie.

Makes one large pie (around 12 inches)

Heat the oven to 200°C (Gas Mark 6 / 400°F). Roll the shortcrust pastry out if needed. Lightly grease a large flan dish, and lay the pastry on top, pressing gently into the corners of the dish. Trim the pastry to fit – or, if you’d prefer a neater looking pie, do this step after baking, as the pastry will shrink a little. Place some baking beans or a smaller flan dish on top of the pastry, and blind bake for around 15-20 minutes, until golden brown.

Heat the oil in a frying pan, and cook the leeks and garlic over a medium heat for around 5 minutes, stirring occasionally, until the leeks are soft.

Meanwhile, chop the potatoes into fairly small chunks (I left the skins on), and boil for around 15 minutes, or until the potatoes are tender. Drain and set aside to cool for a few minutes.

Use a fork to lightly mash the potatoes – they should not be completely smooth, but you don’t want huge lumps left either. Add the leeks and garlic, butter, parsley, curry powder, egg, milk, and half of the cheese. Mix well. Transfer the mixture to the pre-baked pie crust, and spread out into an even layer. Top with the remaining cheese, and bake for a further 25-30 minutes, until the cheese is crispy and the crust is fully cooked.

Just wondering if you've ever made this in advance? Thinking of it for Christmas Day for vegetarians and side for others.. Might make up on Christmas Eve and bake Christmas Day? Or would you advise baking it all in advance and just reheating Christmas Day?

I think it should probably reheat fine in the oven if you want to cook it fully the day before! Or if you prefer, you could prepare the pastry and the filling separately, and then assemble and cook on the day. I wouldn't pour the filling into the pastry until you're ready to bake though, otherwise you'll end up with soggy pastry. Hope you enjoy it! :)

I made this last night. I did add a bit of salt, but otherwise made it as you posted. It was quite tasty! The dash of curry gave it a subtle but nice background flavor. I may have gone overboard on the potatoes - I don't have a scale and was converting metric to US pounds in my head anyway, but it was still good. Thanks for sharing your recipes and ideas!

This looks like something that I would love! Anything with potato and cheese is a winner in my book. I will have to try it out sometime!

I unfortunately don't have a pan like this and fully intend on making this tomorrow. Could you possibly recommend a replacement? Or would a regular pie pan work?

Thanks for the feedback! :) I should have said 'season to taste' really, I always forget to include that, sorry. And yeah I might go a bit crazy with the cheese, but since potato doesn't have much flavour itself, I figure it needs the help! Anyway I hope you enjoyed it :)

Made it tonight! Pretty good. I had to do a makeshift springform pan thing but it worked out. I probably would've added some salt to the mixture, and maybe would've used a bit less cheese (mine ended up way cheesier on top than yours). This one's probably gonna get a repeat though. :)

If you have an alternative type of pan that you usually use to make pie, I'm sure it would work fine! I only used this dish because it's what I usually make pies/tarts in :)

ooooh this looks so good! i need to make some! everything i love...and pie! i love pie