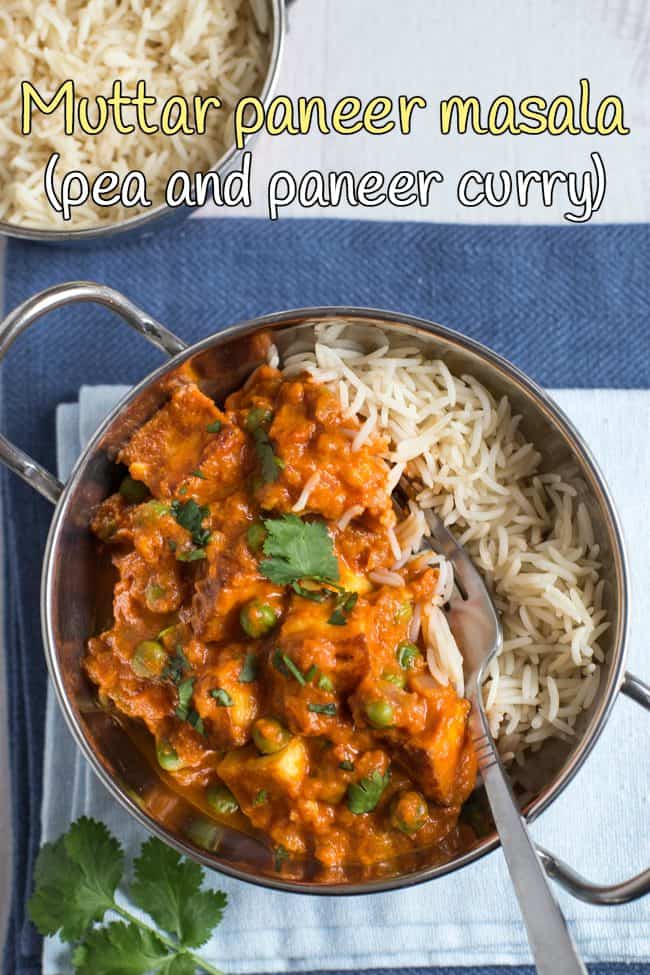 Something I never thought I’d say: I think I might be starting to like peas! They’re still probably my least favourite vegetable, but I actually almost enjoy them these days. Almost. It definitely helps when they’re smothered in a luscious sauce like in this muttar paneer masala. For those of you who aren’t hugely familiar with Indian-inspired food, muttar means peas, and paneer is a dense, creamy cheese that’s really common in curries. And I pretty much love anything that’s served with cheese, so I’m happy. 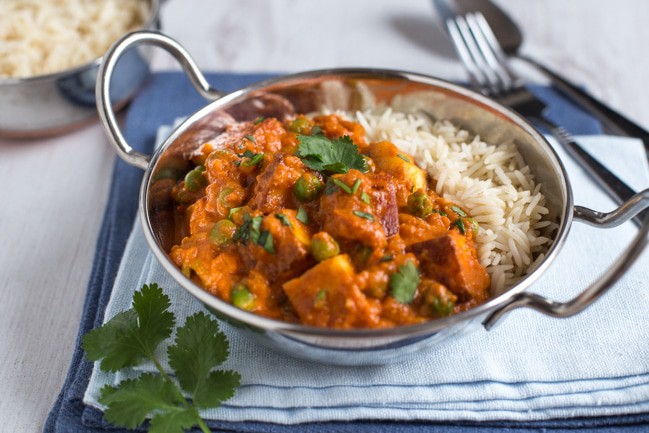 A cheese curry might sound a little odd, but we’re not talking about lumps of cheddar here (although…?!). Paneer doesn’t have a huge amount of flavour itself, just a lovely creaminess, so it’s great for soaking up tasty curry sauces. It’s my favourite – I always order some kind of paneer dish when we get Indian food. I usually get saag paneer every single time, but I’ve been trying to branch out a bit lately, and paneer masala is a new favourite. It’s super rich and creamy – not particularly spicy, just ever so slightly sweet, and really luxurious tasting. 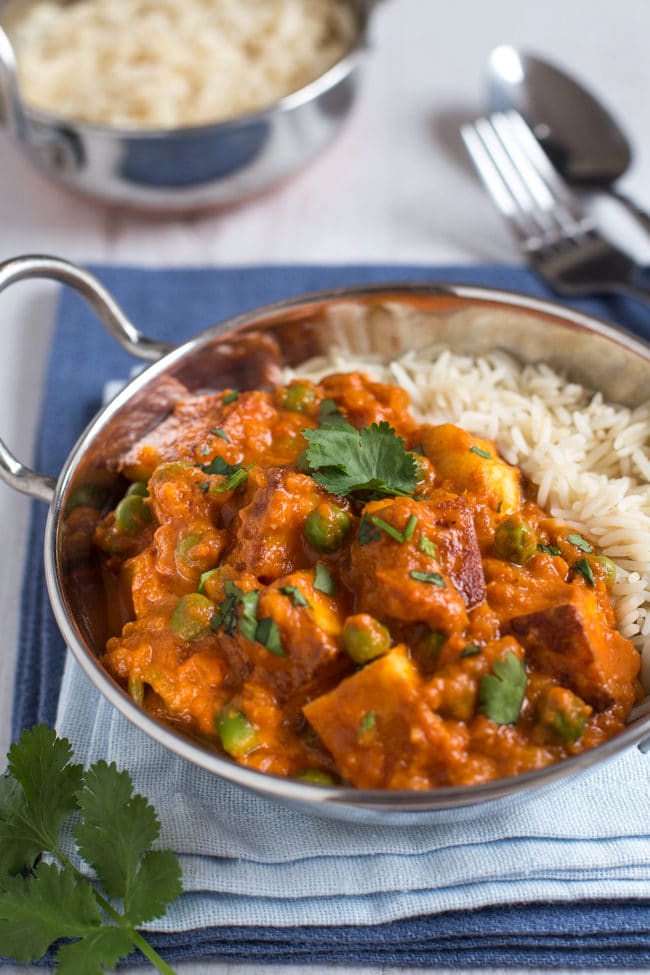 Of course, this is my own entirely non-authentic version of muttar paneer masala. If you want a real Indian recipe, look elsewhere (unless I’m an accidental culinary genius and have come up with an authentic recipe entirely on my own… but let’s face it, that’s pretty unlikely). This version is quick and easy to make though, and tastes great, so I’m not particularly bothered about authenticity. 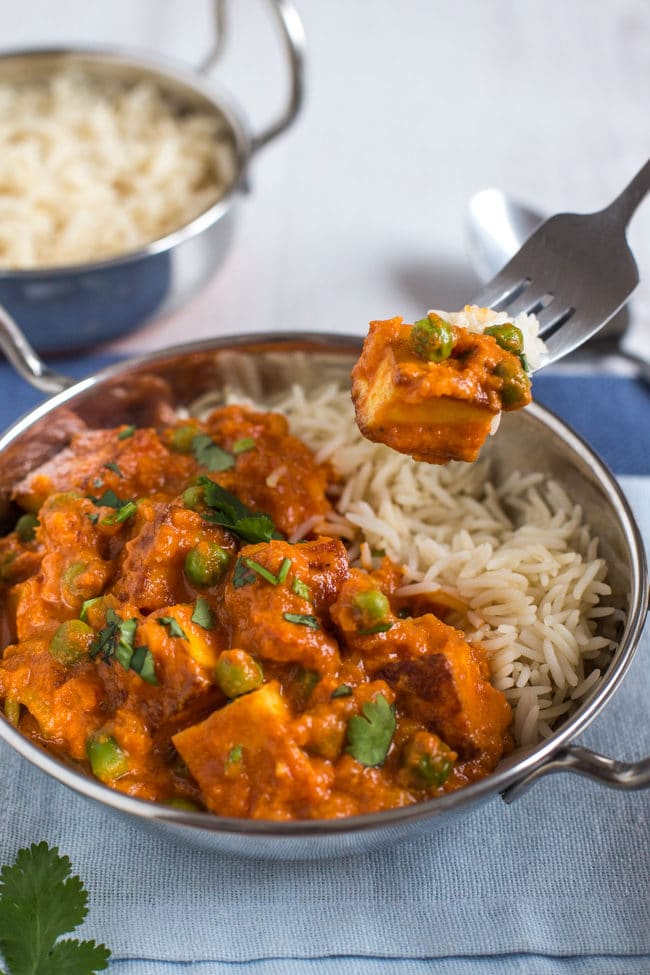 Don’t worry if your spice cupboard isn’t stacked to the ceiling – this muttar paneer masala only uses a few everyday spices. I’m not keen on buying tons of new ingredients for recipes that I’ll only use once, and will then clutter up my cupboards forever more, so I try to keep things simple. I basically use the same 10-ish spices in everything I cook (only 4 in this curry!), and it seems to work for me! 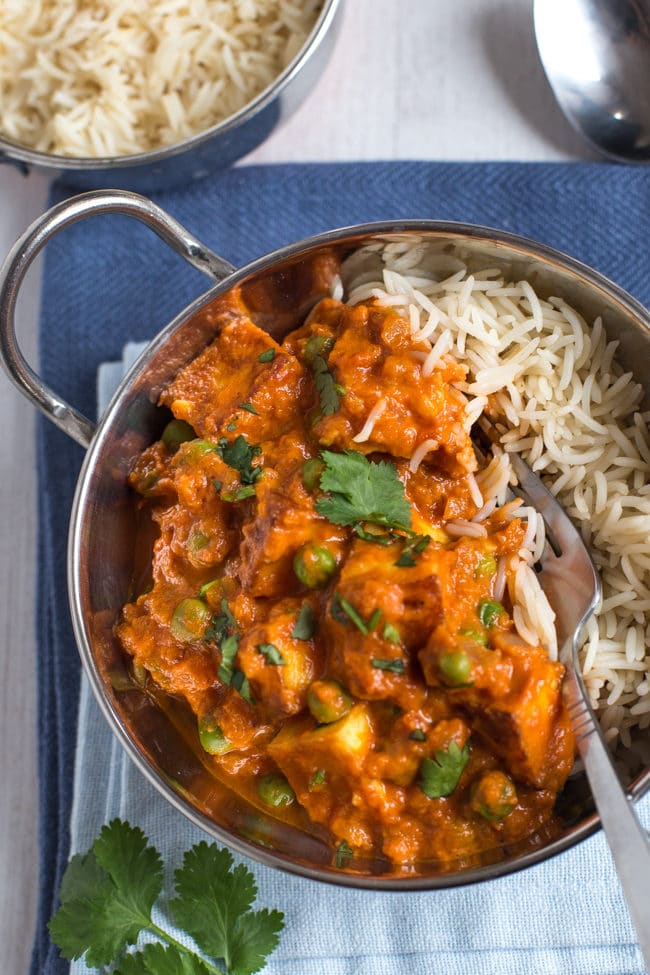 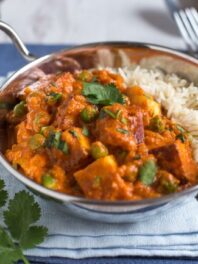 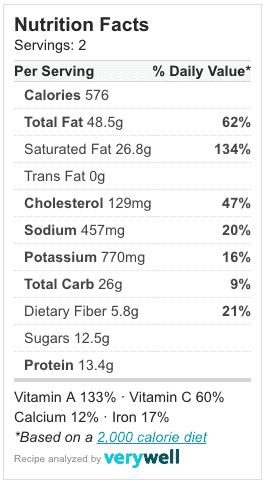 Note: Nutritional information is approximate, and will depend on exactly what ingredients you choose. Information above is for 1/2 the recipe.

Paneer is also great crumbled! Try it as part of a stuffing for this paneer stuffed butternut squash: 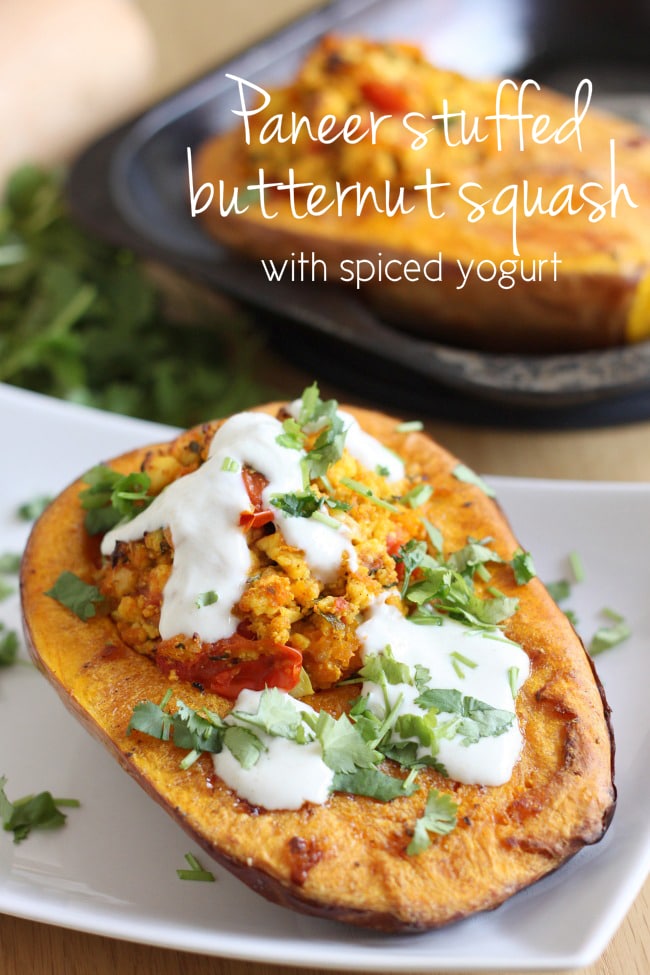 I just made this and it was delicious! I used chickpeas instead of green peas and Greek yogurt instead of cream because it's what I had. All around excellent :)

Yay! Thanks Rebecca, so glad you liked it :D

Definitely gonna give this a try. We love Indian food, especially if it includes Paneer. Question : where did you find those silver (Indian) serving dishes? Been on the hunt for them since we eat Indian at least once a week :)

My brother brought me the little (rice) one back from his travels! And the larger (curry) one, I can't remember... maybe Wayfair? Looks like they do them (here), looks a slightly different shape to mine so probably not the exact one I've got but looks good enough!

I featured this on Meat Free Mondays this week and everybody loved it. I am rather partial to it myself xx

What is "single" cream? Is this the same as heavy cream?

In the UK we have single and double cream - single has a lower fat content than double so it's ever so slightly thinner in consistency (but both are a pourable liquid). I think heavy cream is probably the equivalent of double cream? But to be honest it doesn't really matter too much, I'm sure heavy cream would work just fine in this :)

This looks delicious! I'm definitely giving this one a try, love paneer in curry.