Spring is so close, I can almost taste it - we even saw the sun for a few hours yesterday! But knowing this country, it probably won't arrive properly for a few weeks yet, so I think I can probably squeeze in a couple more stews and casseroles before then. And with St Patrick's Day just around the corner (17th March), I thought I'd come up with my own version of a vegetarian Irish stew (...in the name of the law).

I didn't want my Irish stew to be overly wet - I love the way the tops of the potatoes and sausages crisp up in the oven. A few crispy bits can easily take a stew from good to great! So in order to get away with only having a fairly small amount of liquid in my stew, I wanted to get as much flavour into the broth as possible.

Expedia have recently put together a map of the best regional breweries in the UK and Ireland, so I used one of their beer choices in my Irish stew. I'm not a beer expert, but if an actual beer sommelier tells me something's a good beer, I'm inclined to believe them. There are tons of lovely sounding beers detailed on the map - I used a beer called Summit from the Hillside Brewery in Gloucestershire. Not exactly Irish, but it's a nice dark beer that adds a ton of flavour to the Irish stew broth.

It's described as having 'rich malty flavours, deep caramel notes and a hint of toffee and chocolate'. Again, I'm no connoisseur, but in my eyes a dark beer is the best way to add lots of deep flavour without having to add too much liquid, so Summit was the perfect choice.

Along with some meaty chunks of vegetarian sausage (choose a good quality, flavourful kind!), potato, carrot, celery, and a few other simple ingredients, it makes a lovely simple, hearty stew.

Many of our traditional British dishes were developed during periods of wartime rationing, so they're based on cheap, filling ingredients that can easily feed a crowd. Various famines and invasions (mostly by the English, but let's not open that can of worms right now) have meant that a lot of Irish food is built on the same principles - and this simple Irish stew is the perfect example. It's very straightforward, but a few tasty aromatics make sure it has plenty of flavour.

Serve it up with a good hunk of crusty bread (Irish soda bread, maybe?) for mopping up the bowl, and another big glass of Summit ale on the side, and you're sorted - the perfect St Patrick's Day dinner.

And don't forget to check out some of the other lovely British and Irish beers on the Expedia map while you're at it! I obviously can't enjoy tasting them for another few months yet, but I'm sure my husband will enjoy working his way through the list on my behalf. 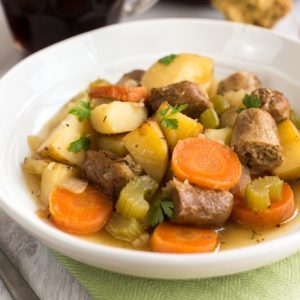 Note: Nutritional information is approximate, and will depend on exactly what ingredients you choose. Information above is for ¼ of the recipe.

Got a dash of beer left over? It makes great batter - I'd recommend beer battered halloumi!