To be honest, Japanese food has never particularly appealed to me. I’ve never been to Japan (though it’s definitely on my list!), so I’m pretty ignorant about Japanese cuisine – the only thing I’m familiar with is (vegetarian!) sushi, which I don’t really enjoy. Cold rice and raw veggies really isn’t my thing.

So when I first learned about okonomiyaki, I was pretty surprised by how amazing it looked. If you’ve never heard of it, it’s a savoury Japanese pancake full of shredded veggies (I used cabbage, carrot and spring onions), and it’s really, really tasty. It’s also super easy to make – you may have noticed that it looks a bit of a mess, which means that if you muck up the pancake at all, you can just drizzle a load of sauce over the top, and nobody will be any the wiser.

I’ve been meaning to try making vegetarian okonomiyaki for months, but have been putting it off due to my wariness of Japanese food. But I finally decided to give it a try after being sent the new Ultimum frying pan from Circulon.

The eagle-eyed among you may have noticed that I usually use the same frying pan in every fried recipe on this site. It’s the pan that appears in this post, this post, this post, and about a million more. It’s a pan from the Circulon Symmetry range, and although I’ve been sent pans from many different companies over the years, the Circulon is always the pan I revert back to. It’s suuuuper non-stick (which means it’s super easy to clean), and has stayed in perfect condition since I first started using it about a year and a half ago.

Sooo, I had high expectations for the new Circulon Ultimum pan.

Luckily, it met my expectations (and maybe even exceeded them!). Just like my old favourite, this pan is incredibly non-stick, thanks to the circular grooves you can see around the base of the pan. I added a dash of oil to the pan before I cooked the first of my vegetarian okonomiyaki pancakes, but I’m not actually sure I even needed to do that – they slid around in the pan in the same way I slide around an ice rink after falling on my backside. Washing up afterwards was merely a formality.

Oh, and the Ultimum range is also oven-safe and dishwasher-safe. Just in case you needed more convincing.

The end result was perfectly formed vegetarian okonomiyaki, which I will definitely be making again and again. Although the recipe is simple, these little pancakes have so much flavour! A brilliant introduction to Japanese food.

The only issue I faced was that I kept forgetting what they were called. Ono-? Omi-? Oki-?

Okonomiyaki. Learn it, make it, and let me know what you think! 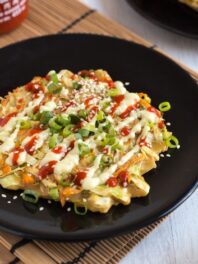 To make the vegetarian okonomiyaki:

Note: Nutritional information is approximate, and will depend on exactly what ingredients you choose. Information above is for one pancake with toppings.

You won’t use a full cabbage for this recipe – why not add the rest to some veggie chow mein?

The flavour of this recipe is fantastic - just like the ones I'm used to buying in a Japanese restaurant. I just felt there was too much batter and not enough veg, so next time I will double the veg so that the batter just coats the veges rather than makes a dense pancake. Very easy to make. Will be doing these over and over and over...

Thanks Claire, more veg is always good in my book :D Glad you enjoy them!

About to make them for the first time

Hope you enjoyed them :)

Becca, I've tried many of your recipes over the years, but this one is easily one of my faves! Can't believe I'm only seeing this now! Though I'd heard of Okonomiyaki, I've never tried them, so I can't compare, but this recipe is great. So quick, easy and flavorful, I've made them 3 times already. Even the veggie-skeptic boyfriend liked them. The sriracha and ginger add a nice kick. Thanks!

Super tasty!! I used 1 pointed white cabbage and 1 large carrot which I think is quite a bit more than you. But it turned out great! Will certainly make this again!

Thanks Afra, really happy you enjoyed it! :)

Second time I've tried this recipe and both times it has turned out great. I've been making a half portion of the recipe and cooking it as one big pancake. Super tasty! thanks for sharing.