A homemade version of the classic Heinz baked bean pizza that was discontinued in the early 00s! Proper British kid nostalgia.

If you grew up in the UK in the 90s, you might remember the almighty baked bean pizza. Piled up with Heinz baked beans, tomato sauce, and oodles of cheese, it’s a British kid’s dream. Unfortunately you can’t buy a baked bean pizza in the shops any more – but it’s really easy to make your own!

What is a baked bean pizza?

Back in the 90s, Heinz used to sell a frozen baked bean pizza, known as the Heinz Beanz Pizza. It was just the thing to throw in the oven on a Friday night, to scoff in front of The Simpsons.

The pizza was discontinued in 2003, much to the disappointment of the entire country. Luckily, it’s really easy to make your own baked bean pizza – here’s how!

Where to buy British baked beans

Obviously if you’re in the UK, you’ll know where to buy baked beans. Even the tiniest corner shop will have baked beans on the shelves.

However if you live elsewhere, you may need to search in your largest superstore – preferably one with an international section. If they stock any British foods at all, they should stock baked beans.

Alternatively, you can just buy them online, which is much easier than searching the shops! Here they are on Amazon US*.

Once you’ve got your hands on some baked beans, you’re ready to get cooking!

Step 1: Choose your base

If you like, you can begin your baked bean pizza with a beautiful homemade pizza base, made with a delicate yeasted dough, hand-stretched to the perfect size… or, you could remember that we’re aiming to replicate a frozen pizza here, and use a shop-bought pizza base instead.

The baked bean pizza is not haute cuisine. It’s not meant to be fancy. It’s not elegant, it’s not posh nosh, it’s not high-class.

It’s just good grub – it’s filling, it’s incredibly tasty, and it’s supposed to be a fun treat. So go ahead and buy a pizza base – the end result is the perfect recreation of a real Heinz baked bean pizza.

I chose to use a tomato and basil pizza sauce, which is already flavoured with garlic, pepper, etc.

You can pretty much use whatever tomato-based sauce you like. Even just plain tomato puree (tomato paste) will work, but since there are so few toppings going on this baked bean pizza, I like to get some extra flavour in where possible.

It’s baked bean time! Go crazy here. You don’t want to just scatter a few beans sparsely around the pizza – there’s no point making a baked bean pizza if you’re going to do it by halves!

I probably used around two thirds of a tin – just keep adding beans until you’ve got a nice single layer all over your pizza base.

We don’t really want to add loads of excess sauce at this stage (nobody likes a soggy pizza), so I find it works better to scoop the beans out of the tin with a spoon, rather than pouring them on.

Again, we’re not going for gourmet here, so don’t feel bad about using pre-grated cheese from a bag. We’re trying to recreate a frozen pizza, remember, not replicate a traditional Italian pizza.

I find a mix of grated cheddar and grated mozzarella works perfectly on pizza, so that’s what I always use. It gives the most amazing crispy texture on top, it stays a little bit gooey underneath, and it’s got the perfect amount of flavour.

Make sure there’s a nice thick layer of cheese covering the whole pizza, and pop it in the oven until it’s cooked to your liking – I like my cheese to be golden brown all over.

Can you cook a pizza straight on the oven rack?

Yes! You can cook pizza straight on the oven rack, as long as it’s a slightly firm base, rather than a soft, fresh dough.

If I’m cooking a frozen pizza, or using a firm shop-bought base like this one, I always cook my pizza straight on the oven rack. I just pop it straight onto the wire shelf! It helps to make the base extra crispy underneath, avoiding any sogginess (and it also means I avoid having to wash a baking tray!).

The only time I don’t cook my pizza straight on the oven rack is if it’s a soft base that’s likely to droop down through the grill – for example, if I’m using a fresh, homemade pizza dough, or if I’m cooking a chilled (rather than frozen) shop-bought pizza.

Otherwise, straight on the rack all the way! I never usually have any problems (like dripping cheese, for example), but I do have a non-stick oven liner*, just in case – so if there is the odd drip, it’s really easy to just wipe the oven liner clean. These ones look the same as mine, and they’re brilliant – just cut them to the right size, place them on the bottom of your oven, and you’re good to go.

And there you have it! A cheesy, tomatoey baked bean pizza. It’s like we’ve stepped back in time, and we’re all kids again. Just need some potato smilies on the side! 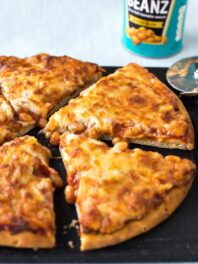 Note: Nutritional information is approximate, and will depend on exactly what ingredients you choose. Information above is for 1/2 a pizza.

* This post contains affiliate links. As an Amazon Associate, I earn from qualifying purchases.

I loved reading this blog. Ah I remember that pizza well. Def gonna give this a go, and the more processed the better 😉😂

Our kids love helping make these for the holidays! They taste so good too! This looks absolutely delicious! Thank you for you recipes!

Thanks, glad you enjoyed it! :)