Homemade pizza dough is something I’ve always struggled with. You’d think it would be pretty hard to make a bad pizza, but somehow I’ve achieved it on many (...many...) occasions.

The main issue is that I find baking with yeast seeeeriously stressful - hence the lack of recipes containing yeast on this blog! I don’t know what it is, I just find it terrifying. Beforehand, I think it will all be fine, but as soon as I start mixing everything up, my heart starts beating really fast and I get all clammy (TMI?).

What happens if I leave the yeast bubbling away for too long? Or not long enough? Will I go away to let it prove and end up forgetting all about it? Will I get too nervous and use the dough before it’s ready? Ahhhhhh.

I literally turn into a quivering wreck. Which is absolutely ridiculous, really. I’m a fully grown woman who cooks for a living, and I’m terrified of a bit of yeast.

This would all be fine if it wasn’t for the fact that I would love to be one of those women whose house always smells of freshly baked bread. You absolutely can’t beat it. So, I thought I’d give it one more go. I found this beer pizza crust recipe on Mess Makes Food and thought it looked easy enough - plus you know I love cooking with beer, so it was definitely a goer.

I used a new free app called Diiing to see if I could reduce my yeast-induced trembling. And that’s not a typo, by the way - there are 3 i’s. Diiiiiiiing.

Diiing allows you to program in different timings for a complex recipe or meal. It dings (hence the name!) when it’s time to move onto the next task. I’m thinking it would be great to help with cooking a big roast dinner, so you know when to put the next vegetable on, exactly how long your broccoli’s been boiling, etc. When you’re doing lots of simultaneous tasks (e.g. roasting potatoes and boiling veg at the same time), it also helps you to ensure that everything will finish at the same time, so you don’t have to leave your veg sitting there going cold because you put it on too early (…just me?).

While I was making my pizza dough, I used Diiing to help me keep track of how long I had to leave the yeast to froth, and the dough to prove, and the pizzas to bake. I also added a couple more hands-on tasks - I estimated that it would take me about ten minutes to faff around with sauce and toppings, for example. If you find that tasks like this are taking longer than you expected, you can always pause the app until you’re ready to continue.

I really appreciated having this app watching out for me while I was making the pizza dough! It was nice to know that I’d be called back to the kitchen by the ‘ding’ when the dough had finished proving.

By the way, this pizza crust: complete and utter success. Undoubtedly the best pizza I've ever made from scratch. Just look at it! Perfect, if I do say so myself!

In my opinion, pizza is allllll about the cheese. I'm definitely a thin crust person - the bread is only there as a vehicle for the cheese and toppings. To me, a thick doughy crust is just a waste of precious belly space.

In the past I've tried to make thin crust pizzas and for some reason, they've always risen anyway. I'll admit, I'm fairly certain that it's usually my fault, but still. They just never seem to work properly. This beer pizza crust stayed nice and thin - as long as you punch it down a bit after it's finished proving, it shouldn't rise too much. 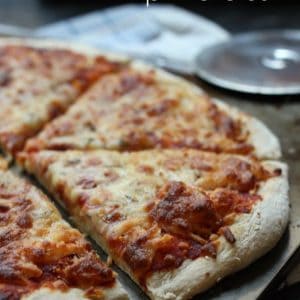