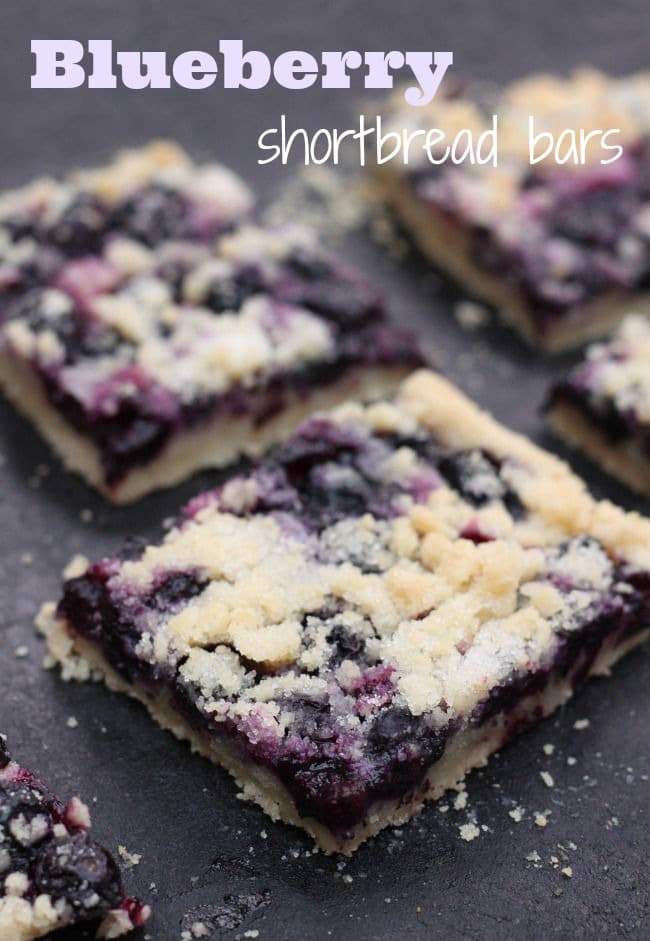 Why don’t I bake more often?! These blueberry shortbread bars were incredible. And so, so, so easy!

I actually only made them because I had some blueberries left over from my summer fruit tarts. I wanted to make a sweet treat with them, but since my baking skills are usually not anything to write home about, I decided to stick with an old favourite: shortbread! It never fails me.

These blueberry shortbread bars start with a plain layer of shortbread, then there are plenty of juicy fresh blueberries, and it’s finished with a sugary, crumbly shortbread topping. It’s like a sandwich, but about fifty million times better. 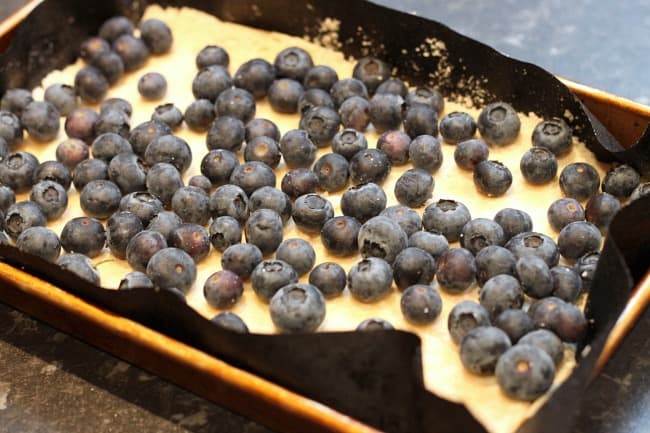 When I say that this shortbread recipe is an old favourite of mine, I mean old. The basic shortbread recipe actually comes from this cookbook, which my family seems to have owned since about the sixteenth century: 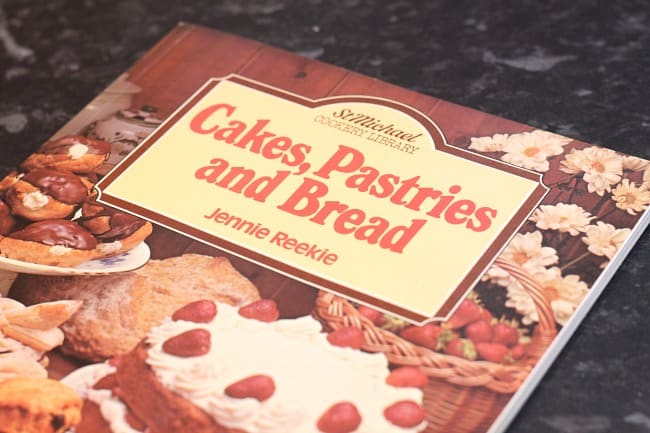 Okay, so it was only published in 1977, but you get the point. Considering I wasn’t born until more than a decade after that, it seems like we’ve had it since the beginning of time. Look at those colours! That’s not just bad lighting, those colours are actually true to life! Couldn’t get more 70s if it tried.

This shortbread recipe was pretty much the only thing I ever made growing up – I’ve made it so. many. times. These blueberry shortbread bars are obviously a jazzed up version, and I’m so glad I decided to do something a bit different with it this time, because it couldn’t have worked out better!

Layering up the shortbread like this creates so many gorgeous textures – crispy on the bottom, crumbly on top… plus, where the blueberry juice seeps into the shortbread, you get a beautiful gooeyness that I just can’t resist. The blueberries cook right down and get really juicy – it’s almost as if these blueberry shortbread bars contain blueberry jam, even though it’s just 100% fresh fruit.

In case anyone else is doubtful of their baking abilities like I am: these are so easy. The crumble topping is made from the exact same mixture as the shortbread base, so as long as you can rub butter into flour, you’re about 95% of the way there. And if you can’t – just do the ‘show me the money’ gesture into a bowl. That’s all there is to it! 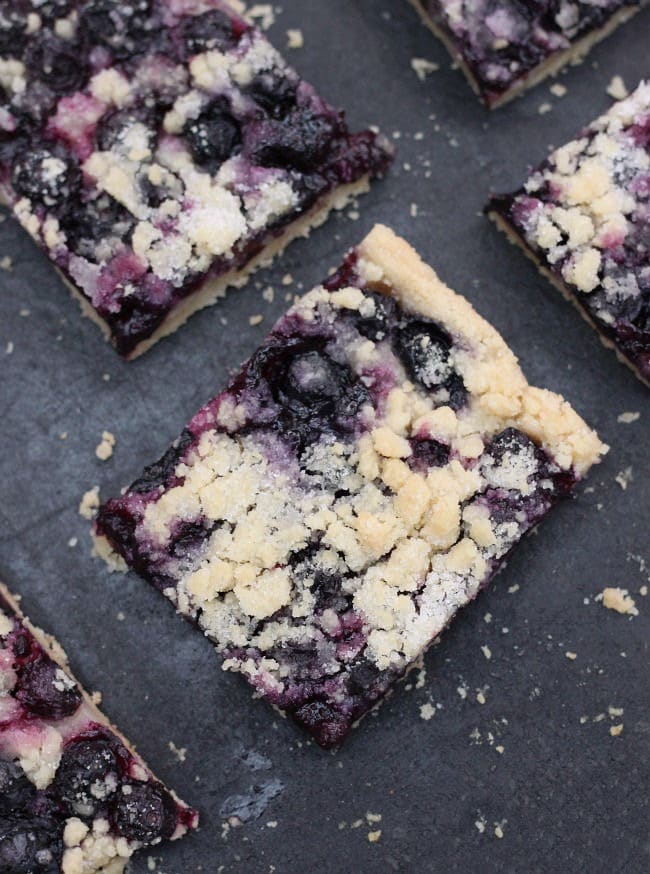 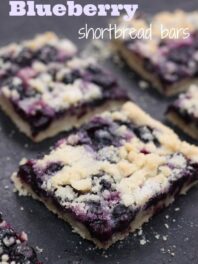 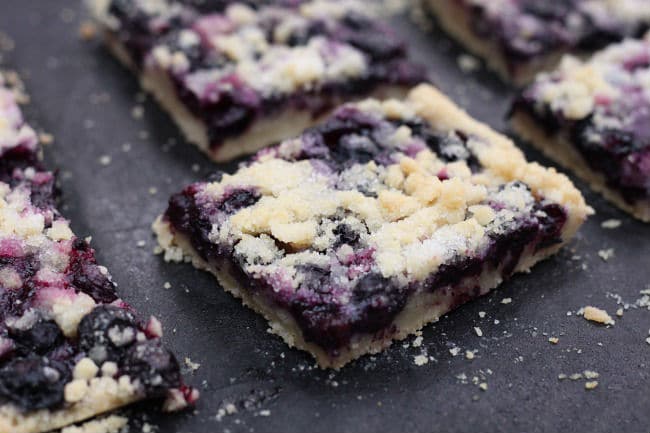 If you prefer a chocolate-based dessert, try my salted chocolate pots with caramel sauce! 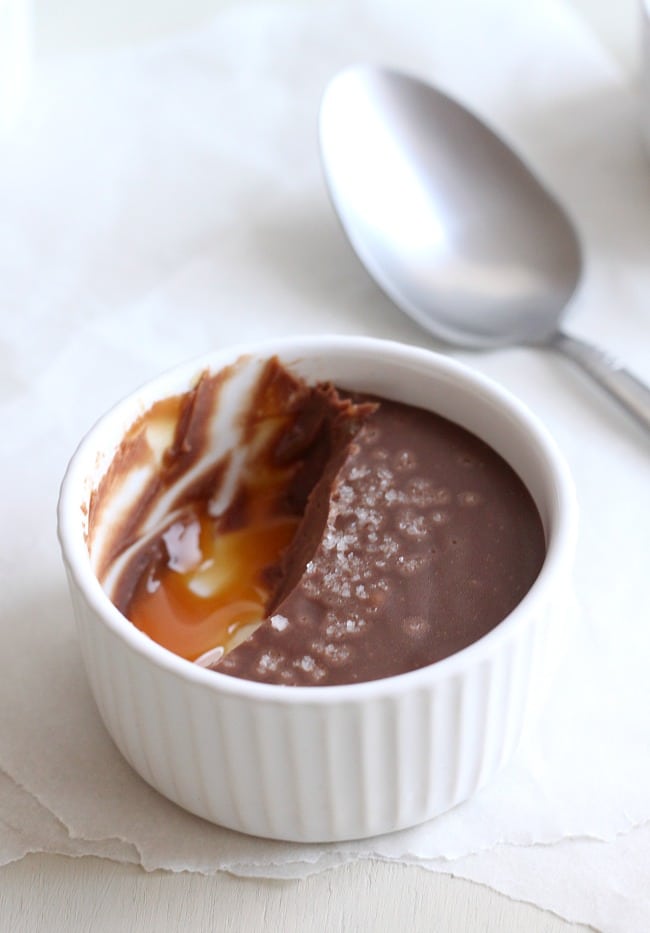 I make these all the time and have for a very long time. I add the zest of a lemon to the shortbread and when I dont have fresh blueberries I use frozen and just add a little cornflour to the berries. Work mates love them and in fact there is a pan in the oven now to be brought to work tomorrow :)

Oh cool! I'm so glad you've enjoyed this recipe so many times, thanks for the lovely feedback :)

Becca, these were so tasty! Thanks for all the great recipes! Nicki

Glad you liked them Nicki! :) I'll have to make them again soon, they're so easy!

I just made these today with my fresh-picked blueberries! So delicious!! This is the converted recipe that I used: 1 cup AP flour 1/4 cup granulated sugar 7 Tablespoons salted butter 3/4 cup fresh blueberries

Yay I'm so glad you enjoyed them Kerry :) thank you so much for the conversions!

I made these today, and they are delicious! I doubled the amount of shortbread to fit my 9"x13" glass baking dish, and used 260g of blueberries. Utterly perfect, and my husband loves them, too. Thanks for yet another great recipe! :)

Yay I'm so pleased you enjoyed them Emily! Thanks for your comment! :)

Do you think these can be frozen??

I actually very rarely freeze things so I can't say for sure, but I don't see why not! I say it's always worth a try :)