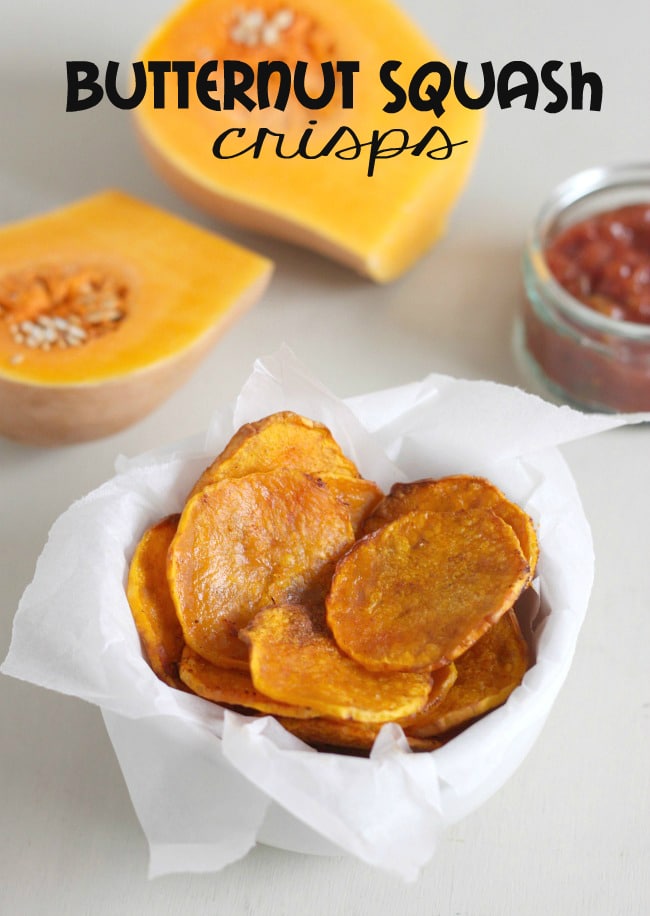 Crisps are one of the foods that I’m attempting to give up as part of my new year’s resolutions. Not crisps specifically, I’m just trying to eat a bit better, get a bit fitter, and generally be a better person in every single other way (that’s what new year’s resolutions are for, right?).

I’m sure that in a couple of weeks, crisps will once again begin to make semi-regular appearances at lunchtime, but I always think that even if your new year’s resolutions only stick for a couple of weeks, that’s still two weeks of goodness that wouldn’t have otherwise occurred. Every little helps! 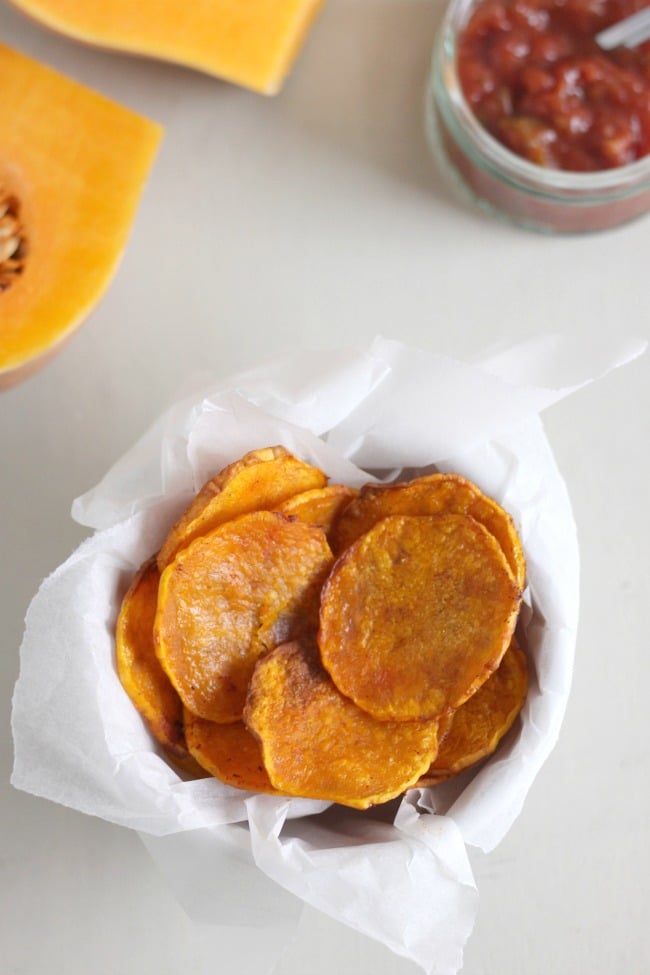 Until then, these butternut squash crisps make a great alternative to the potato version. Since they’re baked not fried, you can use minimal oil, making these more of a healthy side dish than a greasy snack (finally, crisps alongside my dinner is totally appropriate!). And although potatoes do contain plenty of nutrients themselves, butternut squash is arguably even healthier. Per 100g, butternut squash has fewer calories than potato, less carbs, and more calcium (along with a few other differences!). 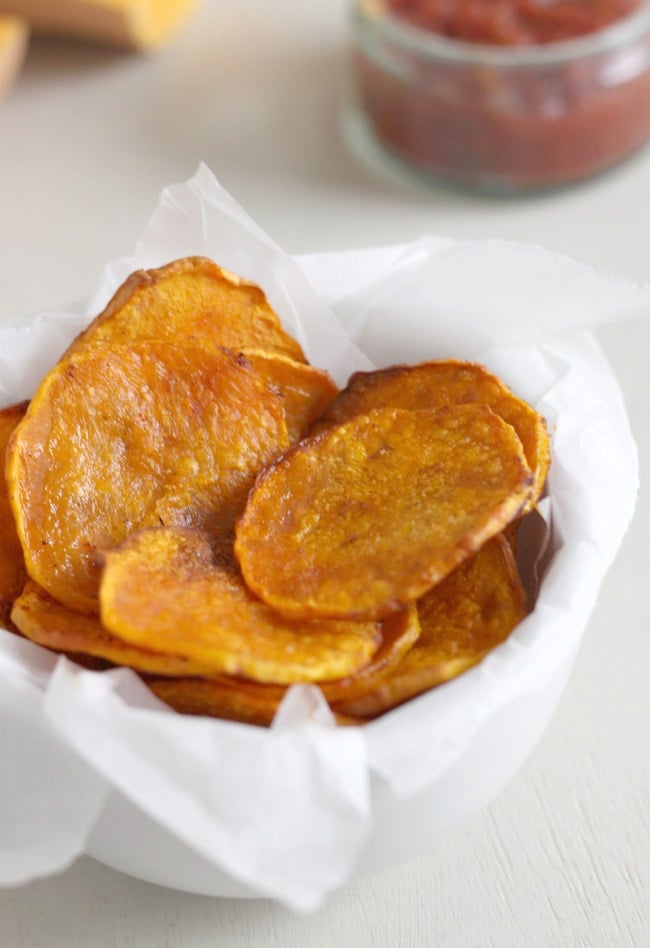 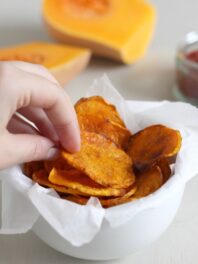 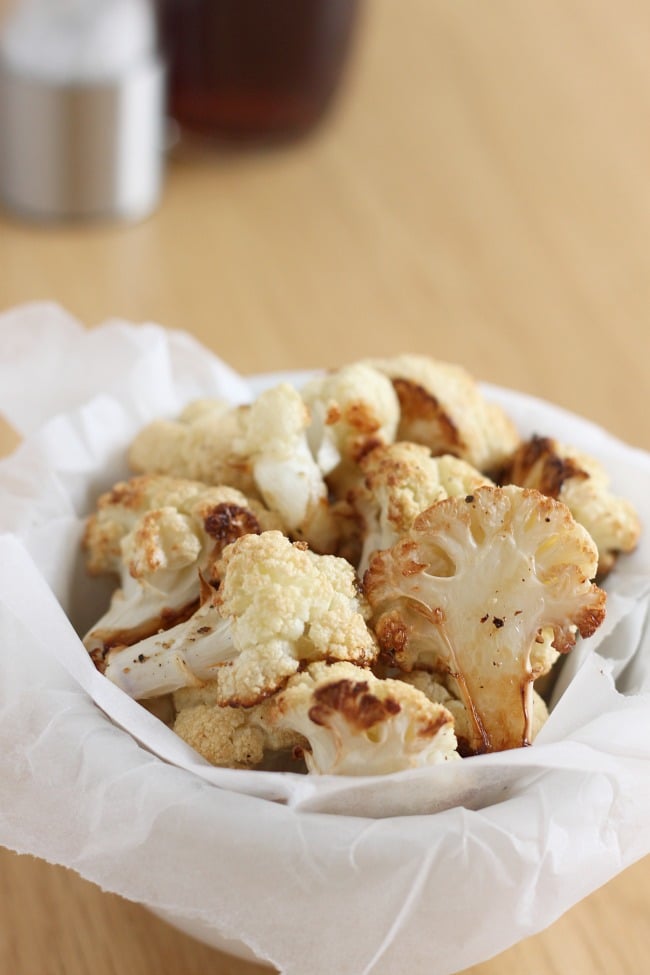 I love vegetable crisps and usually use carrots, parsnip and beetroot for a colourful mix. Butternut squash is a veggie that I often forget about, so thank you for the reminder. I must give this a go because like you I am very partial to the crunchiness of crisps ( a bit too partial if you get my drift!).

hey! just wondering.... This look SOOOOO GOOOOD, but I am currently living in Mexico and we don´r have butternut squash, any recomendation?

Hmm, sweet potato maybe? Or even just normal potatoes! Or I'm guessing other kinds of winter squash would work too if you have them :)

Oh, yum! I could make these for lunch tomorrow using my Whizz Pro. Speedy and yummy. I'm definitely going to!

These look fantastic. I've thought about this and these look like they've turned out so well. Yum!

I like Teresa's idea of having these instead of poppadums (okay, as well as). These sound fab, Becca and of course because they are baked they are guilt-free! I am definitely trying this. I haven't had much luck with baked crisps but I will give these a go. :-)

I think the key is to cut them really thin, but also really evenly so they all cook at the same rate. But even if they end up a bit soft they're still delicious! :)