As a vegetarian, it can sometimes be hard to know what to serve as the main focus of your meal - especially if you're used to 'meat and two veg' style meals. These carrot and white bean veggie cutlets are a great option! They're really versatile, and can be served in any number of ways as an alternative to meat.

First up, what the heck is a cutlet? I know I’ve used the word in the title of this recipe, so I feel like I should know, but I don't. I actually think it’s one of the words that has so many meanings, it's hard to pin down an actual definition - like the word ‘salad’ (go on, try and define a salad!). It basically seems to be any mixture of ingredients, formed into a rounded shape. That's about as specific as I can get.

But cutlet is the word that came to mind when I made these, so cutlet is what they shall be called. And these carrot and white bean veggie cutlets are definitely worth making!

What's in these veggie cutlets?

The main flavour of these veggie cutlets is carrot and cheddar cheese. It's such an amazing combination - one I don't use often enough, actually - especially since the carrots take on a slightly sweet flavour as the cutlets bake.

The cutlets also include:

- white beans (I used cannellini beans, but haricot beans, butter beans, or anything similar would work too)
- marinated artichoke hearts (my favourite!)
- fresh parsley
- bread and an egg to bind - the combination gives such a hearty texture

That's it - it's such a simple mixture of ingredients, but so yummy!

As with lots of my recipes, I made sure there was no pre-cooking required to make these cutlets (who can be bothered?). You don't need to fry off any vegetables, you don't need to boil anything in a pan - just chuck all the ingredients in a food processor, and give it a good blitz. That's the mixture done! Even the raw carrots and cheese can be chopped up in the food processor - just cut them into a few smaller chunks before you throw them in, to give it a helping hand.

Once you've blitzed up the mixture, it's time to form it into the cutlet shape (whatever that is). So easy! I made 4 cutlets from my mixture, but they were a pretty generous size - you could easily stretch it to make 6.

How can I serve these veggie cutlets?

As I said, these veggie cutlets are pretty versatile - you can use them in all sorts of meals. Here are a few ideas:

- with roast potatoes, roasted veggies and gravy (an awesome roast dinner!)
- with mashed potato and peas
- with chips (French fries!) and baked beans, British-style
- with salad and vegetable couscous
- sliced in a wrap with salad and sauce (a bit like falafel!)
- burger-style, in a bun (just make them round)
- top with tomato sauce and more cheese, and bake or grill - like a vegetarian chicken parmesan

...or however else you fancy. You never know, they might be your new go-to veggie burger / ball / cutlet. 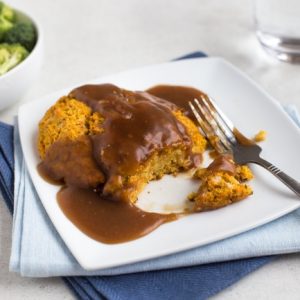 Vegetarian 'cutlets' made from just a few simple ingredients - these are so versatile!

Note: Nutritional information is approximate, and will depend on exactly what ingredients you choose. Information above is for ⅙ of the recipe.

Here's another veggie burger that can be blitzed up with just a food processor - nutty pumpkin seed baked veggie burgers: