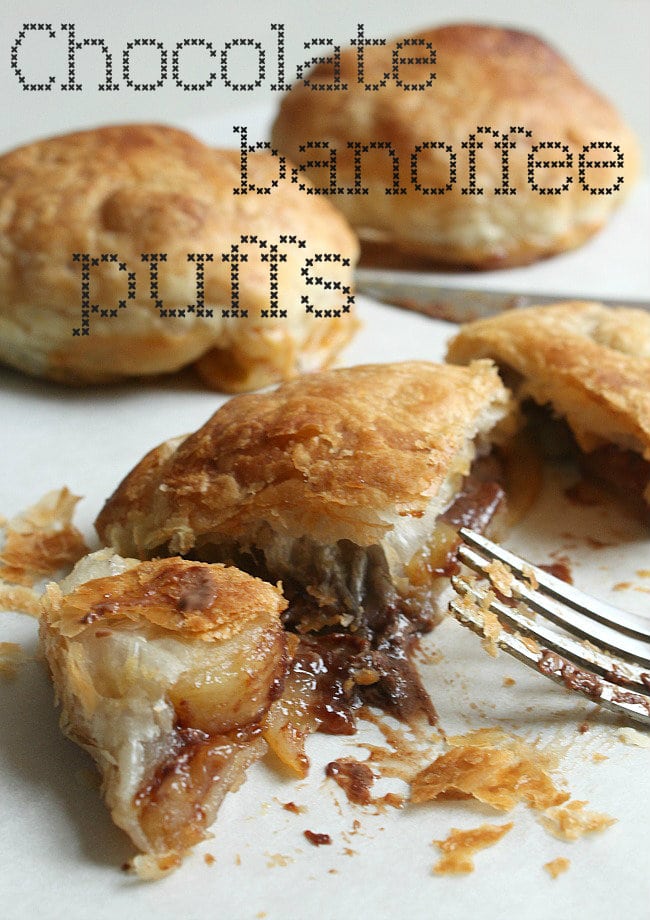 So did you all have a great Christmas? I hope you’re still in ‘eat everything in sight, especially if it has chocolate’ mode, because this recipe is another indulgent Christmas treat – I thought I had better get it posted before people start trying to eat more healthily in the new year. These chocolate banoffee puffs are most definitely not healthy, but they’re definitely very, very delicious. They’re also ridiculously quick and easy to make – just a square of puff pastry filled with a few slices of banana, a couple of squares of chocolate, and a good drizzle of fudge sauce. I’m literally drooling all over myself just thinking about them (well not literally, but near enough).

I love the fact that when you take these out of the oven, they just look like a ball of pastry – certainly nothing drool-worthy. But as soon as you cut into them and that melted chocolate and fudge sauce oozes out, you know they’re something special. The banana flavour infuses through the whole little parcel, and since the only thing better than banoffee is chocolate banoffee, you’ll definitely want to make these in the next few days! 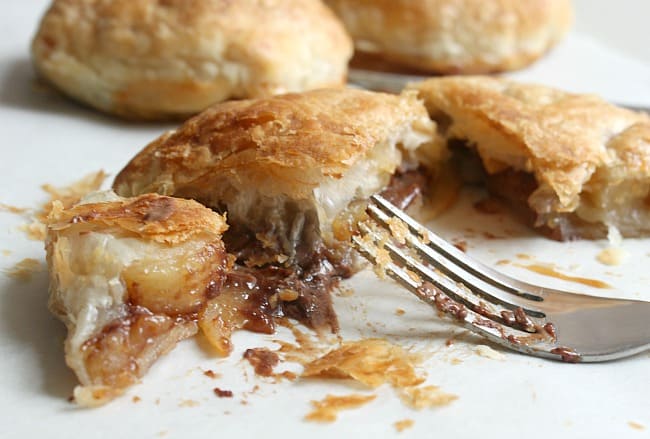 These banoffee puffs are most enjoyable when you embrace the fact that you’ll probably make an absolute mess eating them – there will be flaky puff pastry flying everywhere, and you’ll more than likely end up with melted chocolate smeared around your mouth like a toddler. But that’s another reason that you should make this recipe around Christmas time – nobody cares! Make these while your family still think it’s perfectly reasonable to eat chocolate coins for breakfast, and they don’t mind that there are nearly fifty calories in one slice of Terry’s Chocolate Orange (there’s a reason we only eat them once a year…). In a week or so’s time, those chocolate coins will be replaced by something reminiscent of cardboard (probably some sort of bran), and your chocolatey afternoon snack will instead become some sort of fruit, so take advantage of the season by making this indulgent dessert while you still can! 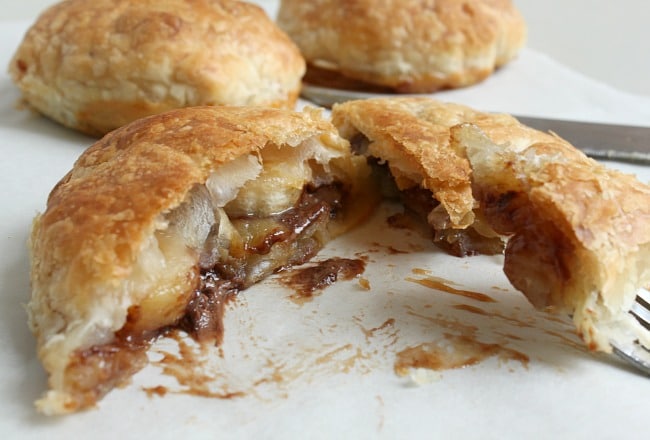 I am an experienced baker and I would not make these again n a million years!

Oh that's a shame! I'm sorry this recipe didn't work for you. I'm not sure what could have gone wrong, they're pretty straightforward! Perhaps we just have different tastes?

These are so divine and totally up my family's street that I shall book mark these on StumbleUpon to make very soon:-)

oh my goodness, i need these in my mouth!

These look delicious!! My kids will LOVE these, too. You're so right...we have to get all of our treats in before 2014 gets here!

I'm all for maximizing my food-sins before New Years hits and I'm just eating carrots for months on end haha. This is perfection!

Haha oh definitely, I've literally been on the chocolate by about 9am. Terrible!