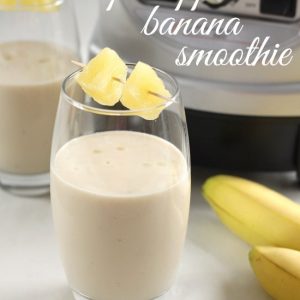 Sorry about the long list of nouns one after another in the title of this recipe. I was considering going with ‘tropical smoothie’, but I personally find descriptive titles more tempting – so coconut pineapple banana smoothie it is.

It’s not often that every single ingredient of a recipe is listed in its title, but in this case, what you see is what you get. Literally: coconut milk, pineapple and bananas. They combine to give the most incredible tropical flavour that makes me feel like I’m back in Mexico.

(a dash of rum wouldn’t go amiss either, though depending on your lifestyle it may be less suitable for breakfast that way…)

Do you see my new toy in the background of these photos? It’s the Optimum 9400 from Froothie. Despite the name, it’s not a Transformer, but it is a pretty amazing blender. I’m going to be working with Froothie over the coming months to bring you some awesome vegetarian blender recipes! Don’t worry, they won’t all be smoothies – blenders are useful for much more than that. But, I am quite partial to a good smoothie – I always go for some sort of juice or smoothie at a cafe when everyone else is having coffee or Coke – so I thought I’d start with this.

So let me tell you a bit about the blender. It happily stands up against its main competition – Blendtec and Vitamix – and in fact outperforms them in many categories (see the full list of comparisons here). For example, it can spin faster than both, and has more blades – which means it takes no time at all to get a perfectly smooth result. It took just seconds to get my banana smoothie nice and creamy!

At just £329, it’s also a lot cheaper than Vitamix (whose blenders range from £399 to £650!). PLUS there’s even a 1-month money back guarantee, so you can just try it out for a month if you’re still not entirely convinced!

What do you think – are you into blenders (as much as anyone can be ‘into’ a kitchen appliance, anyway)? Let me know if there’s anything in particular you’d like to see me make over the next few months! I’ve never had such a great blender before so I’m a bit of a blender newbie. To be honest, I’ve spent most of the time I’ve been using it just staring in awe at the way it makes the liquid rise right up in the jug with a big hole down the middle… I’m guessing this novelty will wear off with time? I hope so, because it makes for very unproductive cooking.

Aaaanyway, yes. Hop along and get yourself an Optimum 9400, make this smoothie, and then tell me which Caribbean island you’re picturing yourself in. I’m thinking… Antigua.

Got leftover coconut milk? Put it to good use in my coconut oats with brown sugar bananas! (they’re vegan dontcha know!)

Disclosure: I received a blender from Froothie for my recipes over the coming months. All opinions are my own. This post also contains affiliate links.