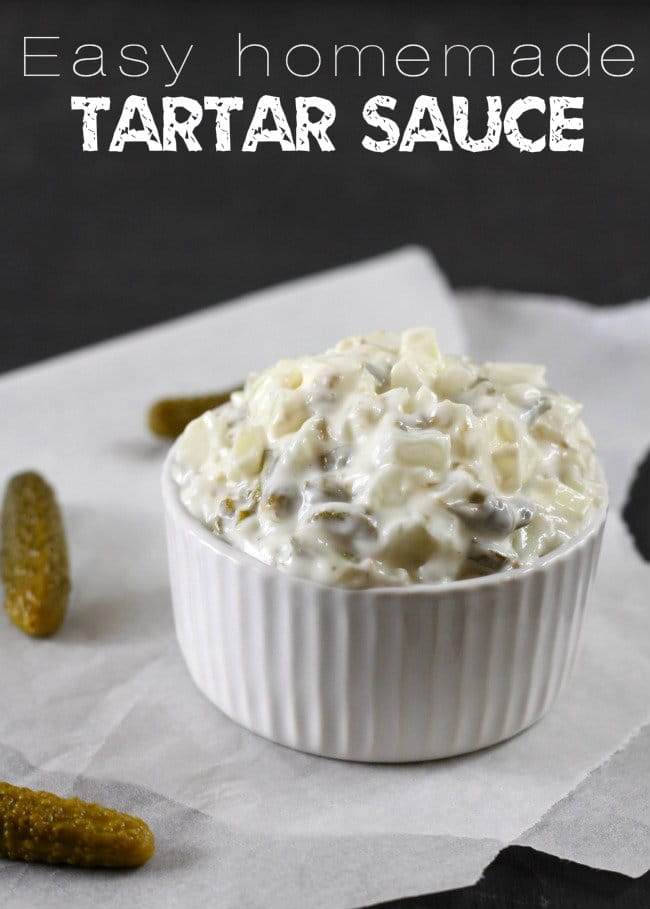 My fiancé and I went out for lunch the other day, and I was very jealous of the tartar sauce he had with his fish and chips. I never see it served with anything other than fish, which is a shame because it’s one of my favourite condiments, and you don’t get vegetarian fish (well actually, there are some vegetarian fish-style products out there, but I’ve yet to find one that isn’t revolting, so let’s just ignore that).

Luckily I know a great, easy tartar sauce recipe, so instead of trying to find somewhere that would serve it to me alongside something other than fish, I decided to just make my own. 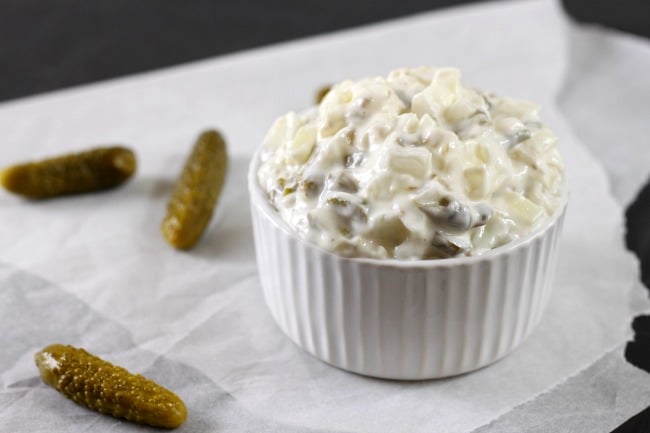 I learned this recipe when I worked in a restaurant a couple of years ago. The food we served was pretty rubbish, through no fault of our own – basically we were told to make pretty much everything in either the fryer or the microwave – but we did make our own tartar sauce, and I couldn’t get enough of it. I couldn’t stop myself from dipping a chip into it what seemed like every five minutes (don’t worry, I obviously took my own pot, I didn’t dip into the stuff we served to the customers!).

Tartar sauce is ridiculously easy to make, which I suppose is why we made our own at the restaurant, even though we served microwaved packets of risotto (yeah… I left very shortly after they started making us do that). This version only has four ingredients: mayonnaise, capers, pickled gherkins (I think that’s just plain old ‘pickles’ to you American folk), and raw onion. I know, it sounds a bit disgusting – who wants to eat raw onion?! But trust me, it works. In fact, it more than works – it’s incredible.

You can serve this sauce as soon as you’ve made it, but the raw flavour is a bit more toned down if you let it sit in the fridge for at least a few hours first. It stays nice and tangy, but it’s just a bit less intense. I guess it gives the flavours a chance to really meld (I’m not entirely sure what that means, but I’m sure it happens).

Next time I’ll show you what vegetarian dish I decided to serve this with – it was a very good choice! 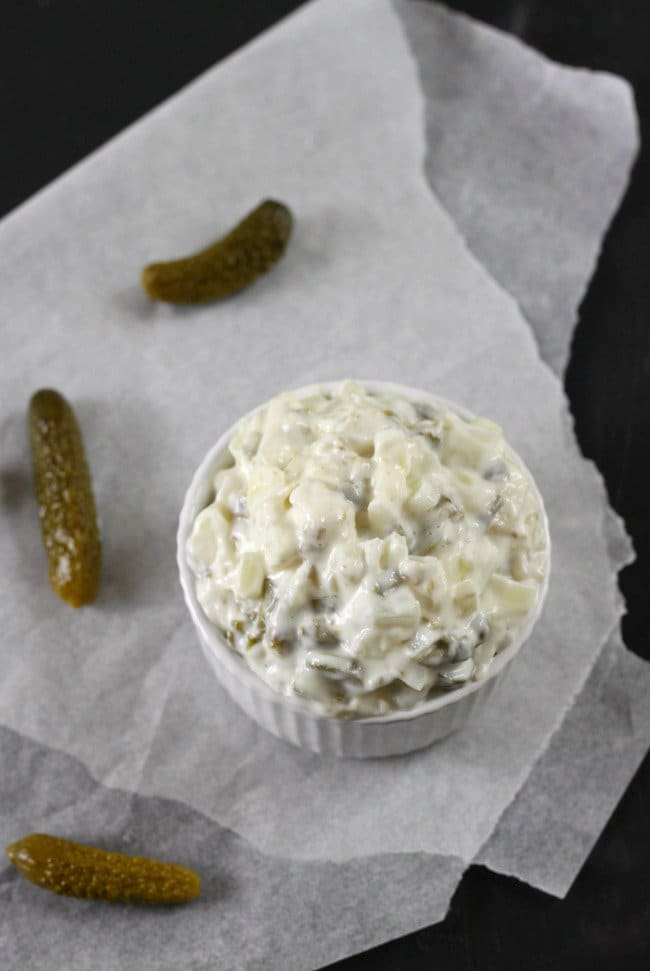 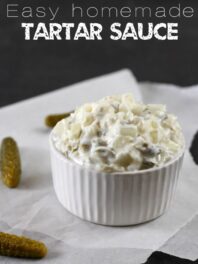 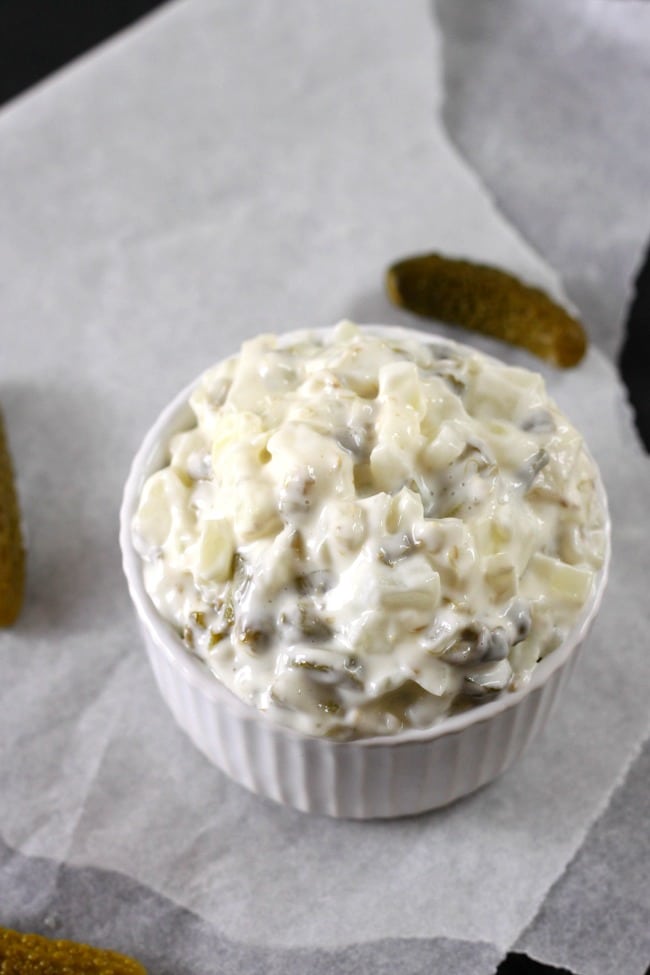 So you like making your own sauces? Try my homemade chip shop curry sauce! 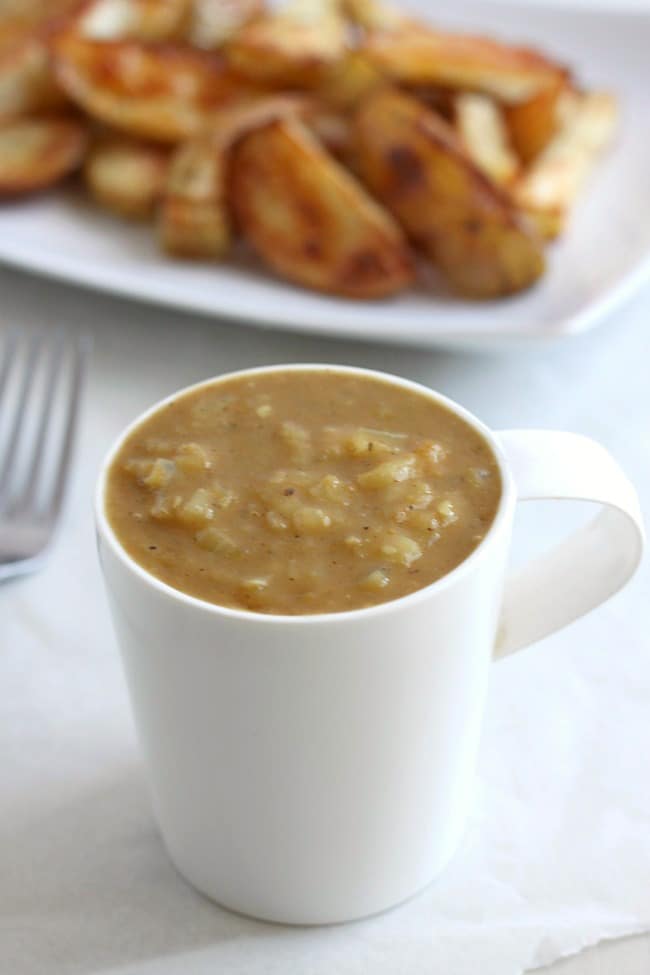 Best tartar sauce I will not buy out of shop again

That's so great to hear, thanks Doreen! Glad you enjoyed the recipe :)

Just made this sauce - it was amazing! Everyone loved it. Great recipe <3

Thanks Rebecca, so pleased you all loved it :D

OMG YES. I have never liked fish so I only tried tartar sauce for the first time recently when I ordered beer battered halloumi and chips as a vegetarian fish and chips alternative. (Which is basically the best idea in the world, and I don't know why more fish shops and pubs have not cottoned on?!)

So glad to see you experimenting with ways for veggies to use it! It's so ingrained in us as a fish accompaniment, I never even think about including it in my meals, which is silly since its so yummy.

Marlys (This and That)

I love tartar sauces and can't wait to make fish again and this sauce to try with it. Pinned and SU it...