Homemade gnocchi is so much better than the shop-bought stuff - and this recipe comes with a tip that will save you SO much time!

I've made homemade gnocchi (potato dumplings) from scratch before.. In the blog post, I said "I’ll definitely be making gnocchi again next time I have a quiet Sunday ahead of me, and I feel like getting stuck into something in the kitchen"... but did I? Of course not. Homemade gnocchi can be seriously labour intensive - you need to peel the potatoes, cook the potatoes (preferably in the oven, which can take hours), and mash mash mash until there's not a single lump left - and that's just the potatoes. Then you have to make the actual gnocchi itself. There's a reason that most of the gnocchi recipes I've posted since then have used shop-bought gnocchi.

I decided it was time to give homemade gnocchi another go. It really is much tastier than the shop-bought stuff - much lighter and fluffier! - and it is so worth it if you have the time (and the inclination).

However, my laziness meant that I did cut a pretty major corner this time - I used frozen mashed potato! Frozen foods are so great for cutting down on the hassle of cooking.

If you just wrinkled your nose in disdain, let me explain.

I know there are probably some kinds of mashed potato out there that use weird ingredients - milk powder, emulsifier, stabiliser, and all kinds of other non-ingredients that have no place in mashed potato. But if you can find a good quality one, it will save you so much time. I used this one from Iceland, which contains just potato, butter, milk, and salt and pepper - that's it. That's all I would be putting in my mashed potato anyway, and it makes this homemade gnocchi a whole lot more hassle-free.

Frozen mashed potato means that there's no more peeling or pre-cooking required, and it's even pre-mashed until it's silky smooth. I mentioned last time that I had a few tiny lumps left in my gnocchi, which wasn't great, but using Iceland's frozen mashed potatoes eliminated this problem entirely.

Once you've got your smooth and creamy mashed potatoes, you only need to add some flour and an egg to form your homemade gnocchi dough.

Shaping the gnocchi is pretty easy - just roll the dough into sausage shapes, and cut it into chunks. You don't need to be too precise - my gnocchi wasn't exactly perfectly even, as you can probably see! If you like, you can use a fork to add the indentations that you often find on gnocchi.

Personally, I think there are better things to worry about than the intricacies of the shape of your gnocchi, but I'm not Italian, so what do I know? Perhaps those grooves serve a very important purpose, but I think it tastes just as good without them, so... meh.

As always, after boiling my gnocchi I cooked it in a frying pan to crisp it up nicely. You don't have to do this, but I really do think it will take your homemade gnocchi to another level. It's so much nicer with crispy sides, and it even seems lighter and fluffier somehow. Definitely recommend!

In summary, here's the general process of making your homemade gnocchi - in just 5 words.

I served mine with an easy kale pesto, made using Iceland's frozen kale (which is now a staple in my freezer - I love throwing a handful in when I'm boiling pasta for a nutrition boost). Obviously you can serve it however you like, if pesto isn't your thing, but after making homemade gnocchi from scratch I just wanted to make something quick!

What do you reckon - is homemade gnocchi something you'll ever try? Would you consider using frozen mashed potato to make life easier for yourself and cut the hassle? 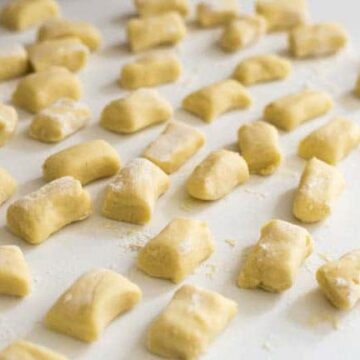 How to make Homemade Gnocchi

An easy guide to making your own homemade gnocchi from scratch, including a handy tip that will save you heaps of time!

For the homemade gnocchi:

For the kale pesto:

There's no shame in using frozen mashed potato to make homemade gnocchi. The good quality stuff has a very short ingredients list (just potatoes and salt!), and it saves so much time. Gnocchi is also a great way to use up leftover mashed potato from the night before, if you prefer!

This homemade gnocchi would be amazing used in my toasted gnocchi salad!