I don't deep fry things often - it's not the sort of thing I'd like to get in the habit of doing regularly. But, just occasionally, when you can produce something as amazing as beer battered halloumi, vegetable tempura, or crispy battered mushrooms, it's totally worth it.

A lot of people are a bit afraid of deep frying at home without a dedicated fryer, but as long as you take a few precautions, it can be pretty easy. Here are my top tips for deep frying safely at home, without having to fork out for a fryer that you may well only use a few times a year. 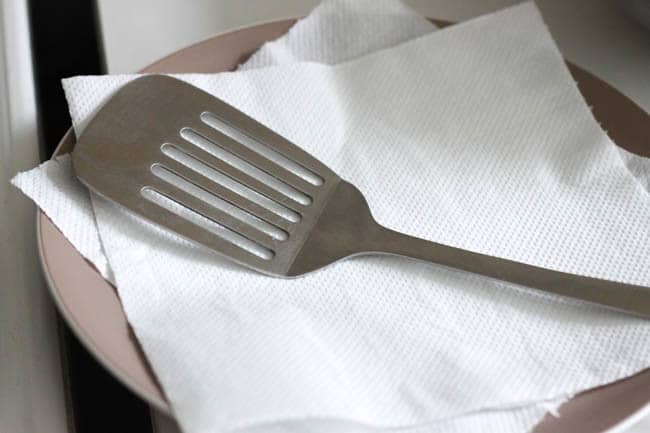 It's no use trying to get stuck in with the frying if you're not prepared - it's not fun trying to fish a slotted spoon out of the drawer with hands covered in batter, or attempting to tear off a piece of kitchen roll with a piece of hot food balanced on a spoon. Be prepared, and have everything laid out neatly before you start, and you'll be much less likely to make any dangerous errors.

Get everything ready and you're good to go.

Oil gets hot, and can be dangerous - but the more anxious and flinchy you are around it, the more likely you are to splash yourself.

When you've finished cooking, it's time to think about the clean-up (grumble grumble).

... and here's hoping I haven't scared you off frying for life. As long as you're well prepared and take a few easy precautions, all should go well.

I was afraid of frying for a long time, but I've done it several times now and it really isn't as scary as it first seems!

Oh, and if you're making beer batter, save the rest of the can for later... drinking and hot oil aren't a great combination.

What do you think, have I managed to convince you that deep frying at home can safely be done, even without a dedicated fryer?