Suet dumplings are a British classic - especially served with a rich, gravy-based stew! Here's how to make perfect suet dumplings.

Stew and dumplings is a British classic. We ate it regularly when I was growing up, and it's still one of my favourite dinners. There's nothing more comforting than a bowlful of rich veggie stew. And the best bit: fluffy suet dumplings!

Dumplings are practically a British institution, but if you're never made them before, here's how to make perfect suet dumplings!

What are suet dumplings?

Seemingly every cuisine in the world has their own version of the dumpling. Japanese gyoza, Polish pierogi, Spanish empanadas... and British suet dumplings! They're a much-loved British dish.

Suet dumplings are cakey and fluffy - vaguely similar in texture to a dense cornbread.

They're often cooked right on top of a gravy-based stew, which is perfect, as the bottom of the dumpling soaks up the gravy beautifully. The top of the dumpling gets slightly crispy.

What is suet? Is it vegetarian?

If you're not British, you may be unfamiliar with suet. It's commonly used in traditional British recipes - the infamous spotted dick, for example, along with various other sweet and savoury suet puddings.

Suet is usually not vegetarian - I'll leave you to read up about it yourself if you're interested in where it comes from, as I don't really want to go into the gory details here!

However, there are brilliant vegetarian suets available, which are a great substitution, and make a fantastic dumpling. It comes in small, solid pellets.

Vegetable suet is easy to find in all big supermarkets in the UK. If you're in a country where suet is less common, you may be able to find it online - here's the one I use on Amazon US, for example.

How to make suet dumplings

Step 1: Mix the suet and flour

To make your suet dumplings, just add the vegetable suet to a mixing bowl, along with some self-raising flour.

I know self-raising flour isn't common in some countries - so you can either buy it online, or make your own, using plain flour and baking powder.

This step is technically optional, but if you don't add any additional flavours to your dumplings, they'll be pretty tasteless. At a minimum, I like to add a generous pinch of salt and pepper.

I also tend to add some dried herbs, and perhaps some ground spices too. Just use your favourites. Dried thyme always works nicely with a rich, gravy-based stew, and some garlic granules too.

Add some water to your dry ingredients, and use a fork to mix. It doesn't take much stirring.

The raw dumpling mixture should be thick and sticky - quite wet.

Step 4: Dollop on top of your favourite stew

The stew I made this time was a variation on this stew recipe, except I used vegetarian mince instead of beef-style chunks. Any gravy-based stew works brilliantly - and for the proper British experience, make sure you use Bisto gravy granules!

Just add big dollops of the dumpling mixture right on top of the stew once it's mostly cooked, and return it to the oven.

Step 5: Bake until the dumplings are firm

You can either bake the dumplings with a lid on, or not.

If you keep the lid on, the dumplings will end up entirely steamed, so they'll be softer and slightly wetter.

If you leave the lid off, they'll crisp up more on top, and be slightly drier.

I like to do a bit of both, so I'll usually leave the lid on for the first 10 minutes or so, then take it off for another 10.

You'll know the dumplings are fully cooked when they're nice and firm.

How many dumplings is one portion?

This recipe makes a fair few dumplings. Obviously the exact number will depend on exactly how big you make them, but I managed to get 7 good sized dumplings from this recipe.

Suet dumplings are pretty filling, so one dumpling per person is probably enough - definitely no more than 2. After all, they're supposed to be a fun addition to a bowl of stew, rather than the main focus of your plate.

If you want to make a smaller batch of dumplings, just halve the recipe.

Can you make dumplings with plain flour?

If you don't have any self-raising flour, you might be wondering whether you can use plain flour to make your dumplings instead.

Technically you can, but your dumplings will definitely end up being pretty dense. Suet dumplings are fairly stodgy at the best of times (in a good way!), but they lean towards too stodgy if you use plain flour.

If you only have plain flour in the house, add some baking powder as well, to help them rise and become fluffy. This post suggests using 1 teaspoon of baking powder for every 100g of plain flour.

What to serve with suet dumplings

You can cook these suet dumplings on top of all kinds of vegetarian stew and casserole.

I'd opt for a fairly wet stew, with plenty of sauce or gravy, so that there's enough steam to cook the dumplings. This also helps to keep things a little lighter, as dumplings can feel a bit heavy if you're not careful.

Here are some of my favourite vegetarian stew recipes: 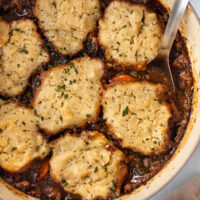 Suet dumplings are a British classic - especially served with a rich, gravy-based stew! Here's how to make perfect suet dumplings.

* This post contains affiliate links. As an Amazon Associate, I earn from qualifying purchases.