This is my first foray into homemade pasta - and vegan pasta at that! I've always been nervous of making pasta from scratch, for a few reasons.

First, I assumed you needed a pasta machine (which you don't).
Second, I assumed it would require a lot of skill (which it doesn't).
And third, I assumed it would take a long time to make (which... okay, it does take longer than just buying pasta, obviously, but it requires less than an hour of actual effort, plus a bit of hands-off resting time, which isn't too bad in my eyes!)

So, why vegan pasta - and why now?

Well, back in January I spent a lovely day in Manchester at the Vegetarian Society Cookery School to celebrate the fact that Cranks are now Veg Soc approved. As part of the Vegan Toolkit Workshop, four of us (me and three other vegetarian bloggers, Choclette, Chris and Shaheen) all cooked approximately a million different vegan recipes in just one day - one of which was vegan pasta!

During the class we made the vegan pasta using a fancy machine, but since I don't think I could fit another gadget in my kitchen if I tried (no lie, about four appliances live under my stairs because there's no room anywhere else), I decided to give it a go at home using just my own two hands.

I honestly can't believe how easy vegan pasta is to make. Here's how.

1. Mix up the vegan pasta dough

Start by mixing up the dough. All you need is pasta flour, water, and a little olive oil - that's it! For obvious reasons, vegan pasta skips the egg that you'd usually use in pasta dough, so the resulting pasta does have a slightly different texture - it doesn't have as much of a bite to it as normal pasta does.

In all honesty (because if I can't be honest on my own blog, where can I be?), I probably prefer pasta with egg. But if you're vegan, or can't have eggs for any other reason, this vegan pasta recipe is definitely worth trying, and it did make for a really tasty lunch. Even if you just don't happen to have any eggs in the house, making vegan pasta is definitely a better option than having to go out and buy some - although, this is coming from a very lazy person, so do with that what you will.

2. Knead and rest the dough

Once you've kneaded your dough for a couple of minutes, pop it in the fridge to rest. A few hours is ideal, but I only left mine for one hour, and it still worked just fine. If you don't leave it to rest, it will be really springy and tricky to roll out, so you're doing yourself a favour by leaving it a while. Go and have a bath or something. 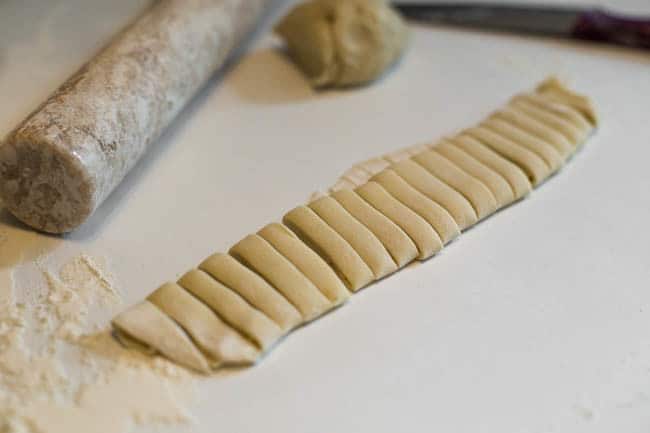 Then it's just a case of shaping the vegan pasta into whatever shape you like. I went for tagliatelle, since I knew it was really easy - just flatten it out, loosely roll it up, and cut it into strips. In the class, we made ravioli, which was equally easy. Up to you.

This pasta takes just seconds to cook. Don't overcook it, or you'll end up with a sloppy mess (not unlike me after a few glasses of wine). The second the pasta floats to the surface of your salty water, it's time to fish it out, or pour it into a strainer. Mine literally took about twenty seconds to cook - just enough time to quickly snap a photo!

Be aware that vegan pasta is a little softer and more delicate than egg pasta, so be gentle with it when you lift it from the water. Then just drizzle it in olive oil or toss it with your favourite vegan pasta sauce, and it's ready to serve.

Disclosure: This is not a sponsored post. I did receive a day at the Vegetarian Society Cookery School free of charge, but was not otherwise compensated for this post. 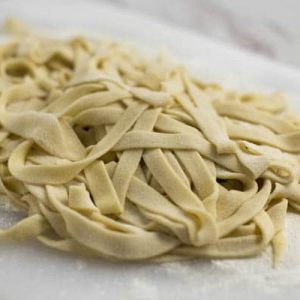 How to make vegan pasta