I absolutely love carbs, I really do. If it were possible to survive on pasta and potatoes alone, I'd be in my element. Unfortunately, I'd probably also be severely malnourished - there's a downside to everything (though... I'm tempted to think it might be worth it...).

Sometimes, when I want to step away from the carbs for a while, I like experimenting with low-carb recipes. I've done it before - low-carb tortillas, for example, or low-carb risotto. They usually involve cauliflower, and this low-carb tikka cauliflower rice is no exception. Because cauliflower only has a very mild flavour of its own (read: it can be pretty tasteless), it's the perfect vehicle for all those flavours you'd usually use on rice or pasta.

This time, I went for a tikka-style flavour combo with cumin, coriander, curry... all those old favourites. Add a few veggies and some cauliflower rice, and you've got a tasty low-carb dish. It's great served as a side dish alongside your favourite curry - half of the batch (which is a very generous portion!) only has 200 calories, so you can definitely get away with adding a nice sauce. Or, throw some protein into the pan (chickpeas, paneer, tofu...?) and turn it into a full meal.

If you've been living under a rock for the past couple of years, you may not realise that cauliflower rice isn't actually rice at all, just cauliflower that's been mashed up to give a rice-like texture.

You can do it in a food processor if you're feeling lazy. I actually prefer to do it the non-lazy way (there's a first time for everything!) - I use a grater, as it gives a coarser grain. In fact, this way you may even get a few little whole florets sneaking their way into your dish, which I quite like as it gives a bit of a different texture. Up to you!

I used tomatoes and green beans in my tikka cauliflower rice but of course, if you're not a fan then you can swap these out for whatever you have on hand. The tomatoes do a good job of stopping the dish from feeling dry, but they're not essential, especially if you're going to serve it with a saucy curry anyway. Enjoy! 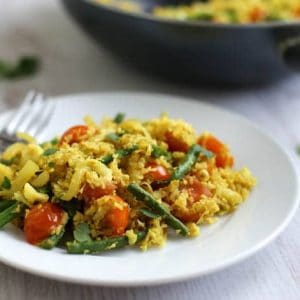 If you're into cauliflower, I implore you to make this low-carb cauliflower pizza - it's so good!