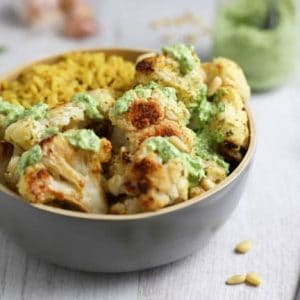 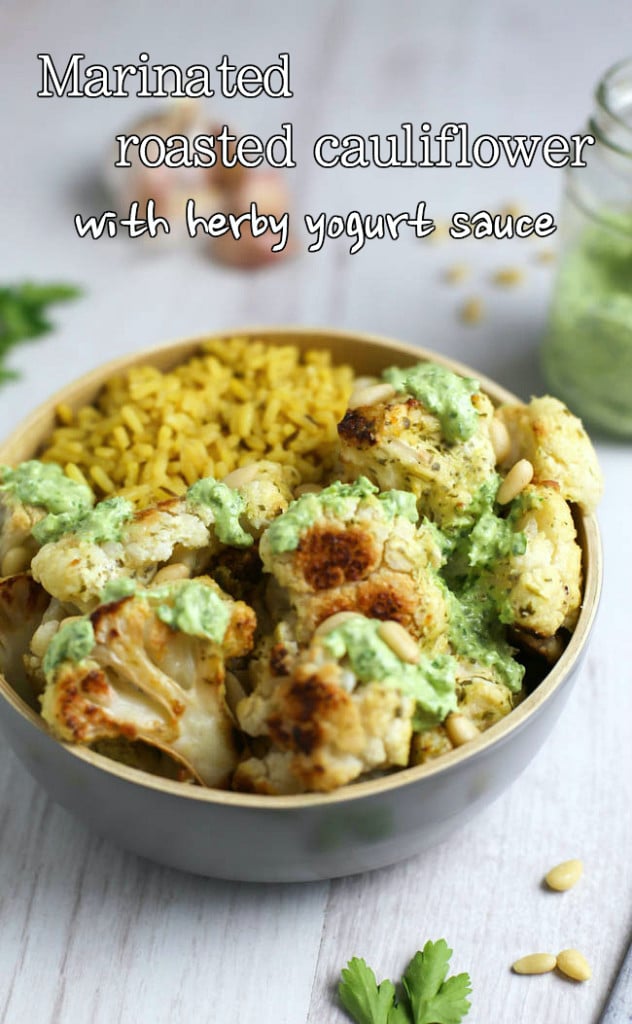 Some friends and I went to play bingo the other day. Yes, I am still 26 years old. However, I do enjoy trying new things occasionally (as long as they don’t involve heights, speed, or any kind of spider), so off to the bingo we went.

I’ll admit, I’m not convinced. I don’t think my brain works quickly enough for bingo – major props to any bingo-playing folk who have a clue what they’re doing! I was spending so long looking for each number that I had no time to actually assess my board and decide whether or not I’d made any lines – meaning it felt a bit like a rubbish version of colouring in, where you’re only allowed to use one single felt tip pen, and there’s a vaguely smarmy man incessantly shouting which part you have to colour in next. I also found myself subconsciously adding up how much we’d spent on games as the night progressed, and wondering how many glasses of wine I could have had if we’d just gone to the pub instead. 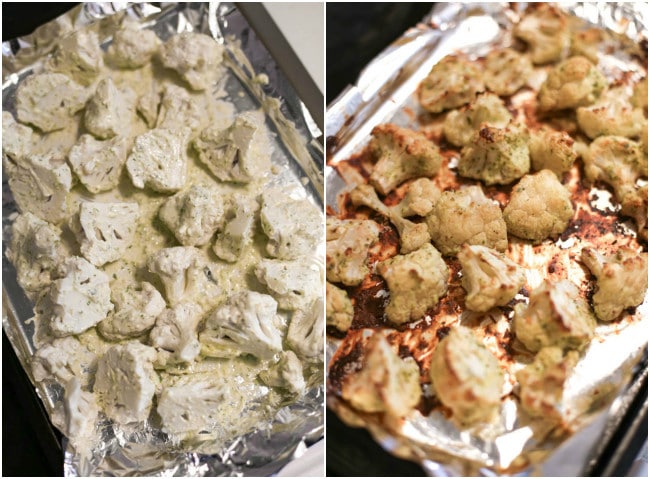 Luckily, my husband is a bit more on the ball than I am and came away with £250 winnings, which certainly helped to ease my resentment a little. Now I just have to hope he’ll share it with me.

Either way, it’s reinforced my knowledge that I’m more cut out for simple things that don’t require too much concentration. Like this marinated roasted cauliflower – it’s easy, it’s straightforward, and it’s super tasty. 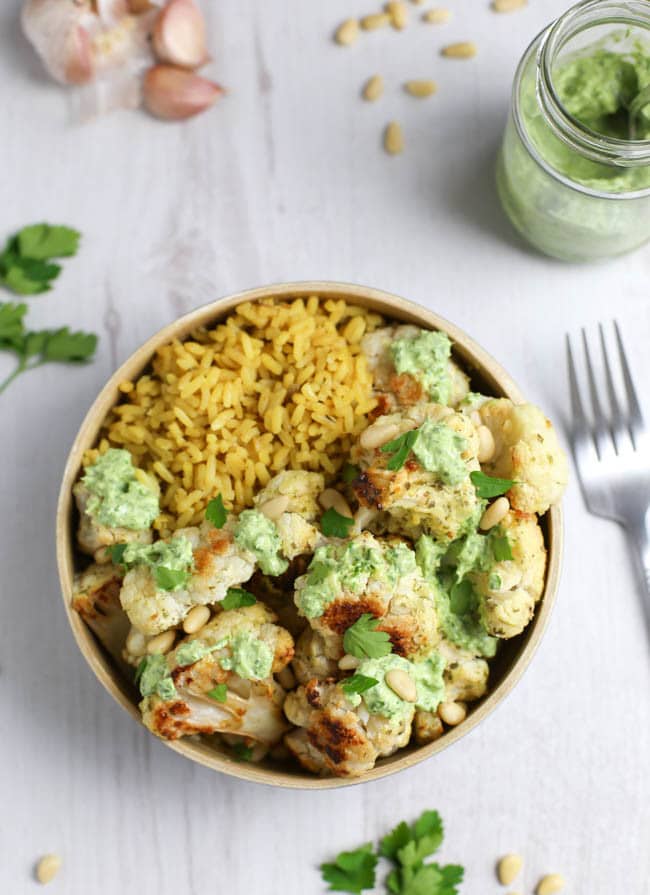 My favourite thing about this recipe is that the marinade and the herby yogurt sauce are actually basically the same thing. Remember: very little brain power here!

Just whizz up a few ingredients, and use about half of the mixture to toss with the cauliflower before roasting, giving it a lovely flavourful coating. Then add a nice big handful of extra herbs to the remaining mixture, along with some lemon juice and a small drizzle of olive oil, and whizz it up again to make the sauce. One food processor for both mixtures = less washing up = happy Becca.

And it’s a healthy way to start the new year too! Long may it continue! (I’m hoping at least two weeks…) 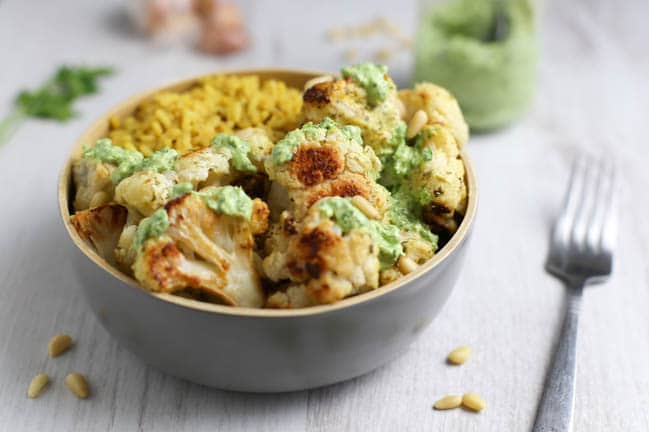 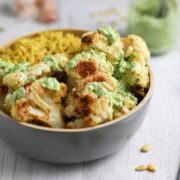 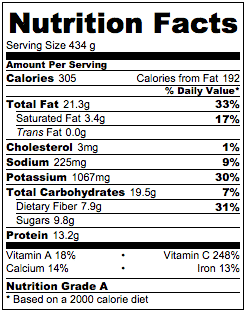 Love cauliflower? One of my most popular recipes in 2015 was my easy chickpea biryani, with cauliflower and green beans: 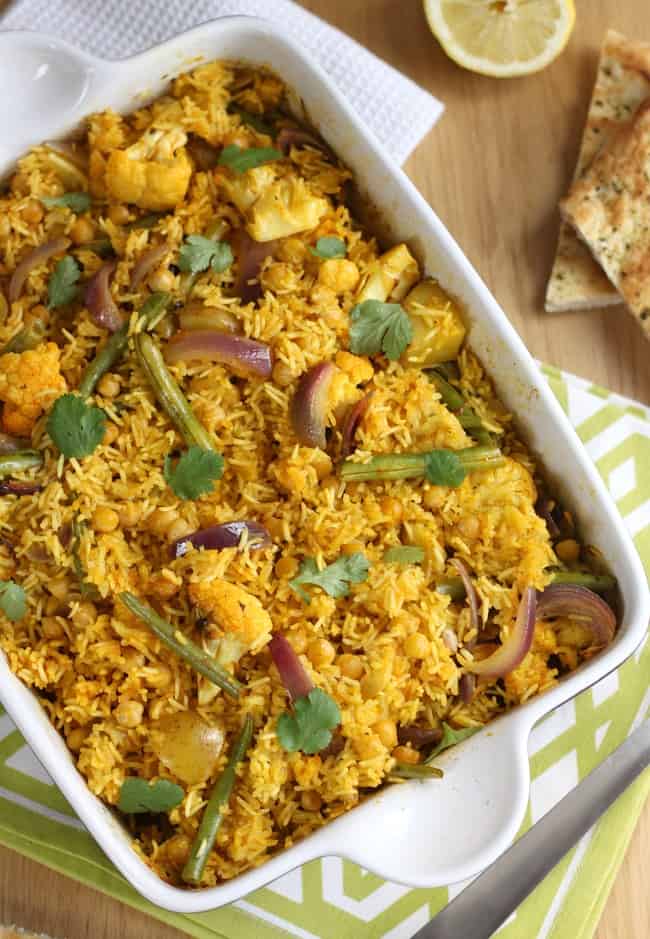