Mushroom and white bean soup with a garlic crouton 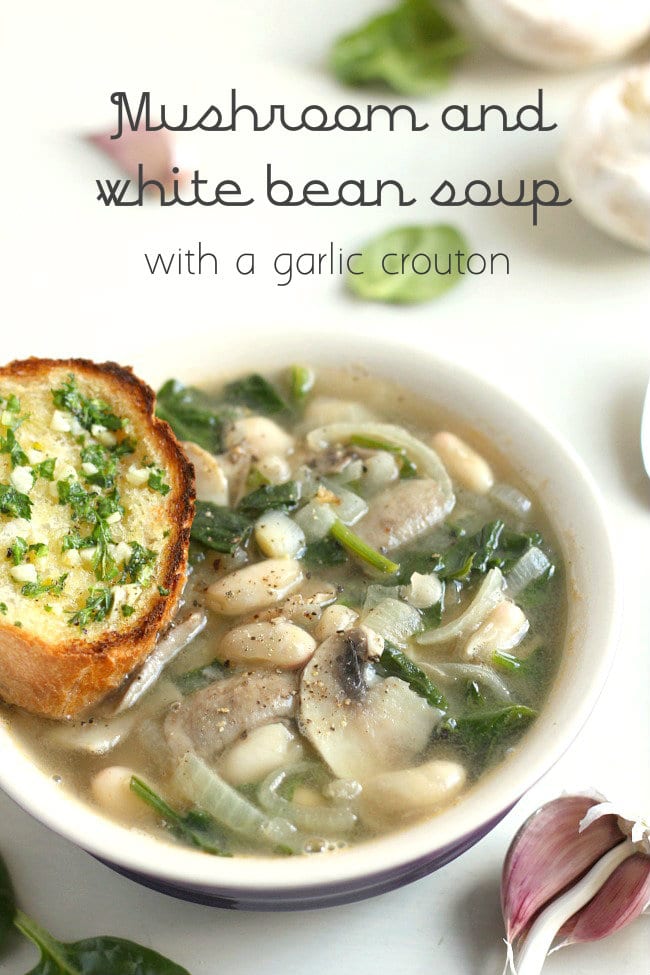 I think vegan January has truly changed me. I accidentally made this into a vegan soup. I came up with an idea for a white bean soup that I thought could be nice, made it, and then realised it was entirely vegan.

I didn’t want to shock you too much, so I made a ridiculously buttery, garlicky crouton to go on the side. You could easily make this vegan too if you wanted to (just use margarine instead of butter), so I went one step further and added a couple of shavings of parmesan too. Much more my style. 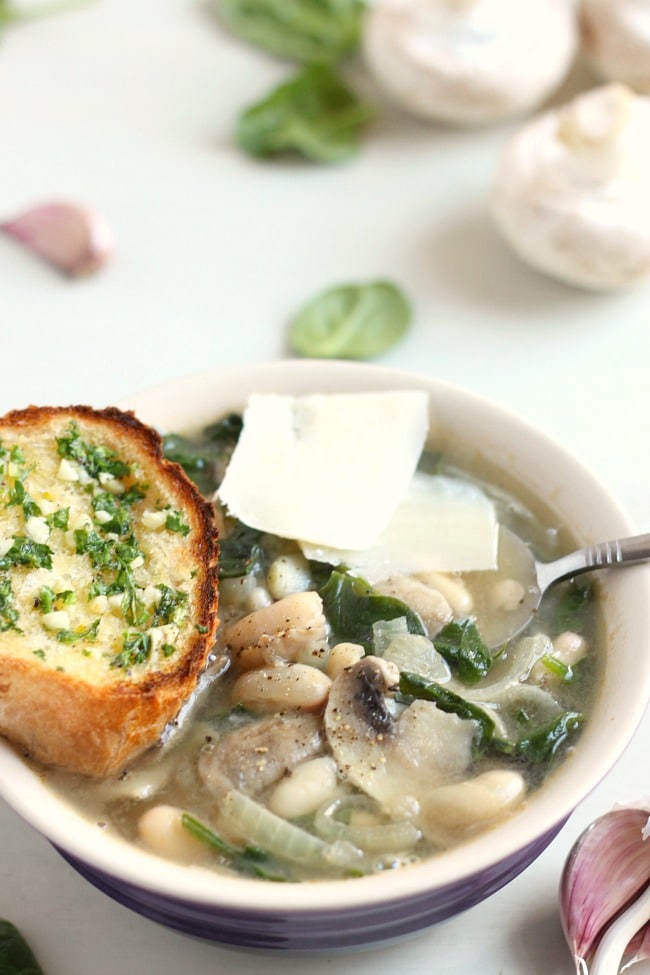 Far from merely being the token bit of cheese that’s pretty much required in everything I make, the parmesan does actually make a great addition to this soup. It goes nice and soft and melty, and combined with the hot, comforting soup and the crunchy garlic crouton… it’s just heavenly.

I can’t believe I just said the word ‘heavenly’, but nothing else would do. 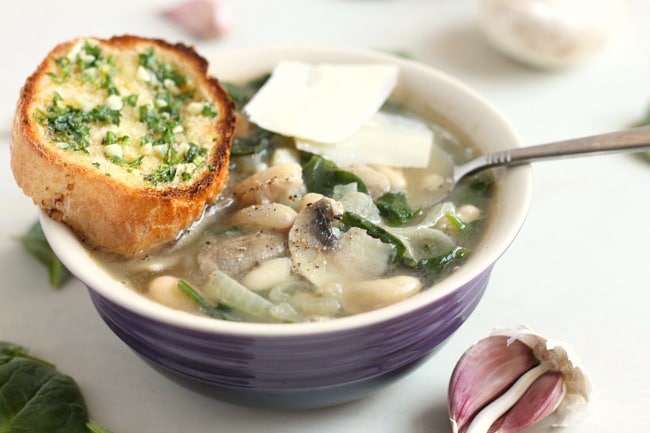 Of course, the soup would be great on its own too, if you’re trying to be good, or you’re just not really into cheese or garlic bread (who are you and how can I be like you?). It’s such a hearty soup, and it really couldn’t be easier to make.

Like most great recipes, it starts with some onions and garlic. Then you add the mushrooms, and cook until your vegetables are just beginning to caramelise. The spinach and white beans are next, along with some vegetable stock and enough black pepper to make you sneeze for days. A pinch of nutmeg takes it over the edge to pure deliciousness. 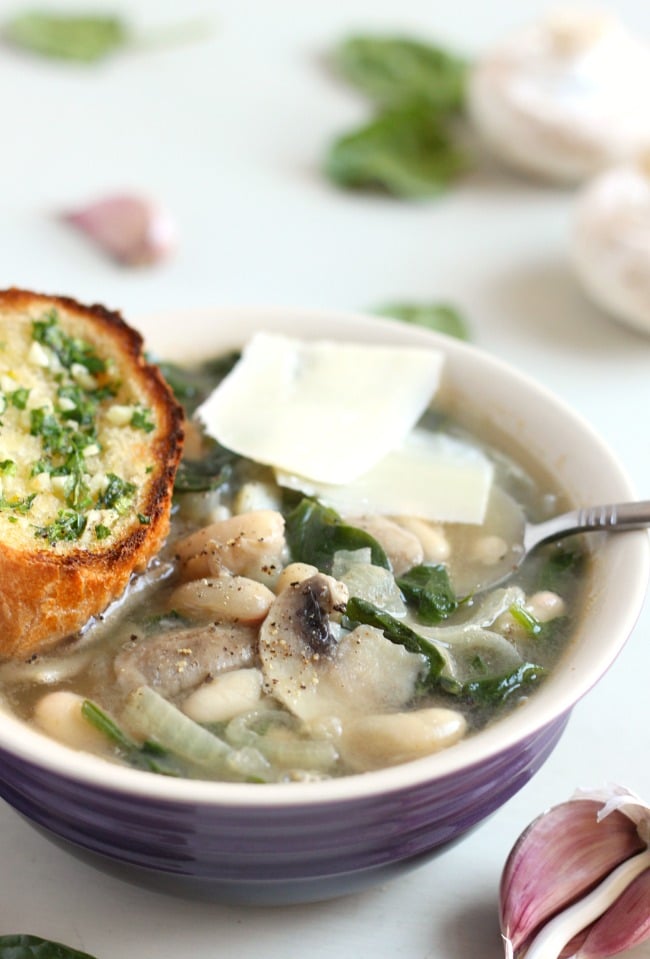 In about twenty minutes’ time, you could be digging into a bowl of hot white bean soup. What are you waiting for? 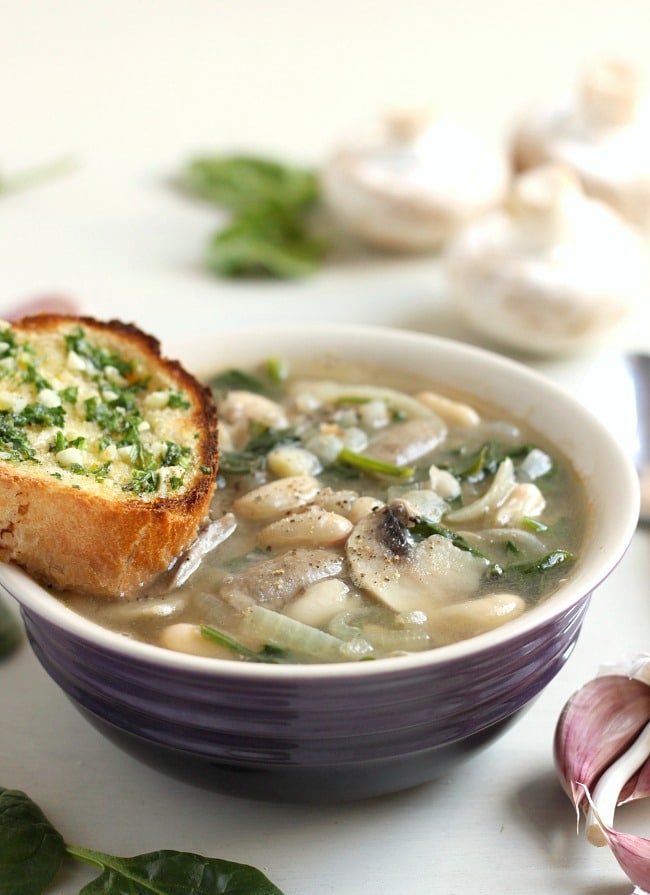 For another vegan soup recipe, take a look at my Thai green curry spinach soup: 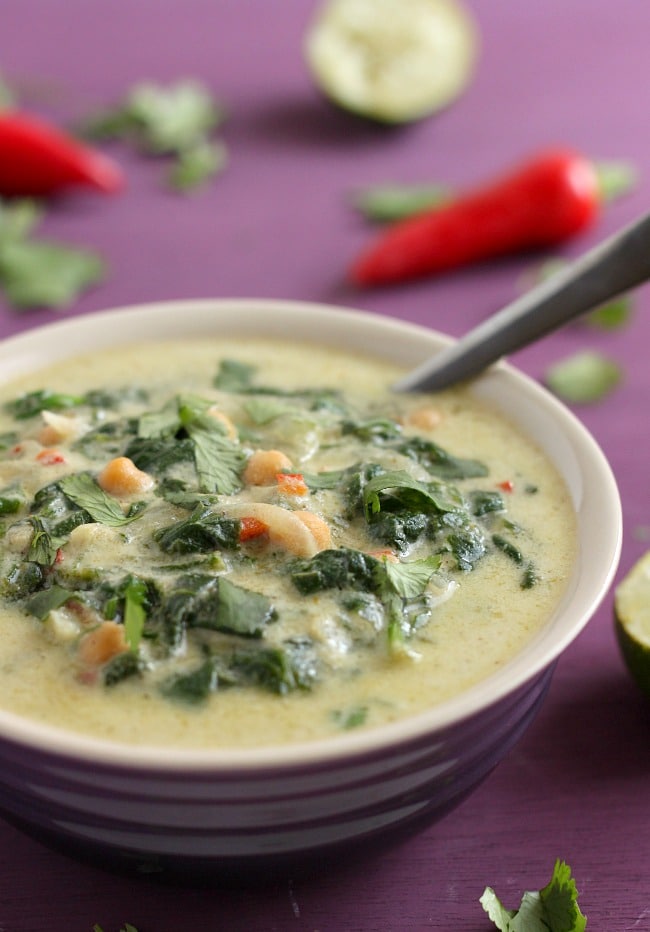 This sounds so good...but I can't help being amused that the ad that came up right under the recipe says, "Add more flavor with Swanson's Beef Stock"! :-) I'm guessing you don't control the ads.

Anyway, I think the small amount of nutmeg in this recipe is a really good idea. I'll have to try it.

lol!! Whoops... no you're right, I don't control them. I totally disagree that beef stock would have more flavour but that is pretty funny haha! Some ad networks let you opt out of certain categories of ad but others don't - I'll see if I can find a way to opt out of that one! :)

I adore garlic crouton and this soup looks really delicious.

This sounds like a delicious and comforting bowl of soup. Thank you so much for sharing the recipe at Tasty Tuesday. I am featuring it this week. Hope you'll drop by this week and share some more fabulous recipes with us.

Hope you have a great week. See you at the party.

Oh my gosh this looks so good. I can't wait to give it a try.

This looks amazing. Thanks for posting this.