Cheese isn't found in Asian food too often, but I couldn't resist making this sesame crusted halloumi. Of course, you could use tofu or something similar instead of the halloumi if the idea of Asian cheese freaks you out... but I have absolutely no idea why you would want to go for tofu instead of cheese. If any type of cheese freaks you out, I think you might be in the wrong place.

Actually, although it might seem like an unusual combination, the halloumi was unbelievable served alongside the crunchy Asian slaw and its slightly sweet dressing. Sweet and crunchy slaw vs salty, creamy cheese - proper swoon-worthy stuff.

Can we just talk about slaw for a second? The word 'slaw' is totally not a thing in the UK, and every time I type it I feel a little ridiculous. Slaw. It's just odd.

But, I couldn't bring myself to call this recipe 'coleslaw' because it's completely not coleslaw - no mayonnaise, no cabbage, it's not coleslaw. But I also was hardly going to call it 'shredded raw vegetable salad'. So, slaw it is. Even if every time I say it, it sounds a bit like I'm in the middle of passing out.

This slaw would be great served on its own, if you're not in a position to get a frying pan out for the halloumi. Picnics, BBQs, packed lunches - it would pack up really well, and only gets better with time. It's also really easy to make - shred your vegetables, mix up your dressing, and mix them together. It's pretty hard to muck it up.

You can shred your veg however you like - just cut them into thin strips with a knife, use your grater, or use a mandoline with julienne blades. My mandoline only cuts lowly slices (first world problems!), so I used that to cut the carrot into thin slices, and then cut them into sticks with a knife. It would have been much quicker to just grate it, but apparently I like torturing myself or something. Plus I like the slightly thicker sticks! Gives it more crunch.

I just about died when I came up with this (and then actually did die when I tasted it and realised that it worked!). Fried halloumi is always my favourite thing in the world, but with all those toasted sesame seeds, the flavour and the crunch is just out of this world.

Literally all you do is roll your halloumi in sesame seeds, and ta-da: sesame crusted halloumi. I know it's tricky, but try to stay with me.

There you go! Easy. 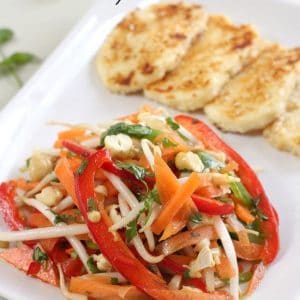 For the Asian slaw:

For the sesame crusted halloumi: