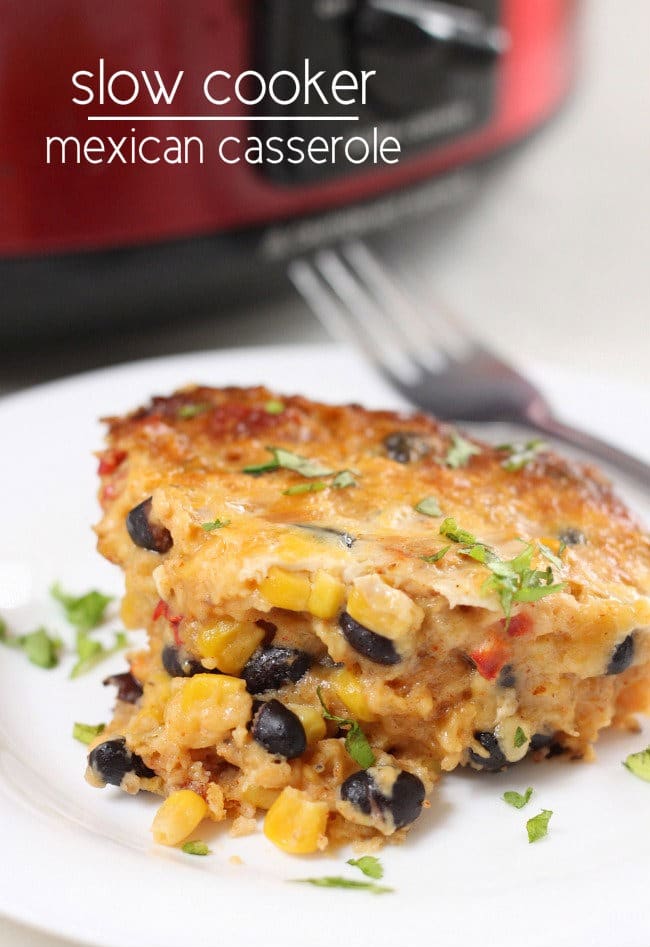 When I first took the lid off my slow cooker, I wasn’t sure if I was going to post about this recipe – it’s not the most attractive dish I’ve ever made, and it turns out it’s really tricky to photograph the inside of a slow cooker. But, then I had a taste and my jaw dropped (not literally, not with a mouthful of food anyway) – this Mexican casserole is one of my favourite things that I’ve ever made in my slow cooker. So please look past its somewhat scruffy appearance and the slightly dodgy photos, and just think about how it tastes! 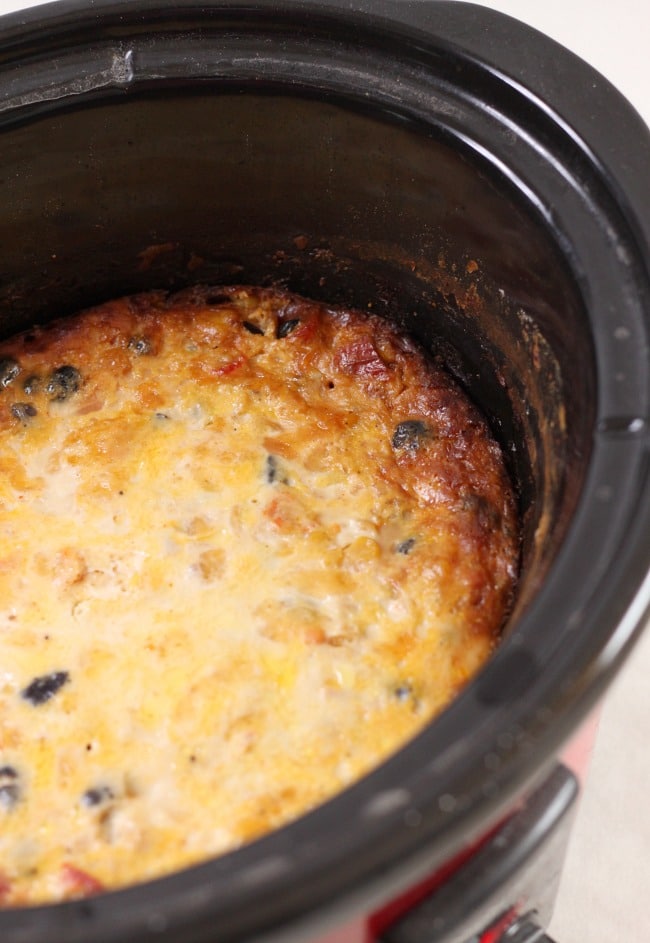 The texture of this casserole is actually pretty hard to describe – it’s not quite eggy, not quite bready, not quite spongy… it’s just a fluffy mixture that’s surprisingly filling at the same time. Along with my favourite Mexican-style ingredients (black beans, corn, coriander, jalapeños), it makes an awesome low-effort dinner. As with all of my slow cooker recipes, there’s absolutely no pre-cooking required – literally just add everything to the pot, give it a good mix, and you’re done. Easy peasy. 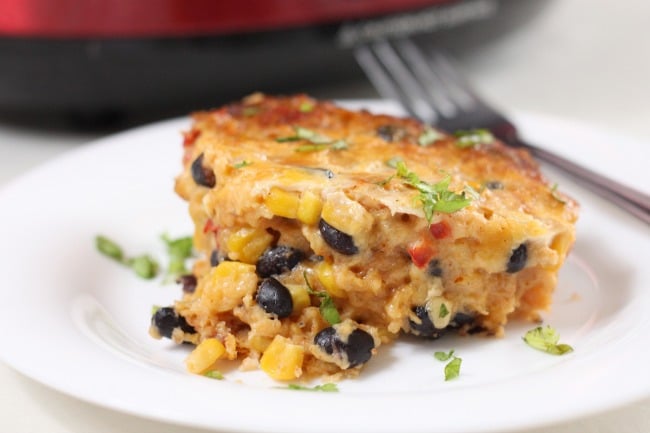 The best thing about this casserole is the crust around the edge. You know that weird ‘magic cake’ thing, where you just make one mixture, and as it cooks it separates into three distinct layers? Well, this casserole does a similar thing – the middle stays soft and fluffy, and the edge crisps up to form the perfect cheesy crust. It’s not quite like a quiche (it’s a bit spongier than that because of the flour), but it’s in the same vague family. Second cousins, perhaps. In a way it’s like a healthier way to make a quiche – you still get a crust, but without having to use any pastry.

We served this casserole as a meal in itself, but you could use it as a side dish too – make it a real Mexican feast. Nom nom! 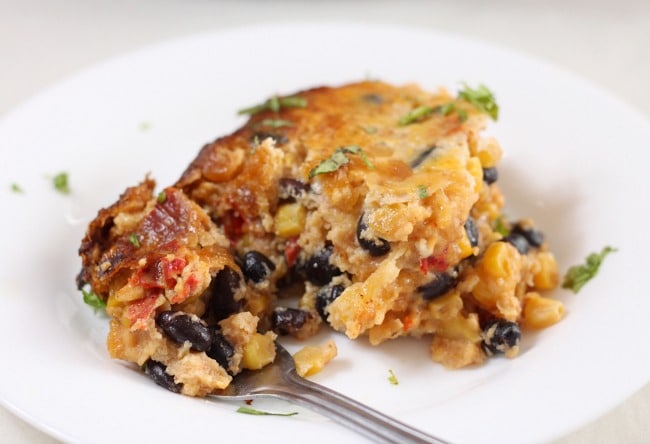 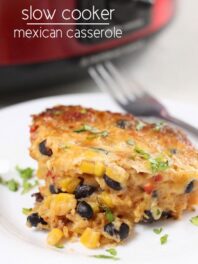 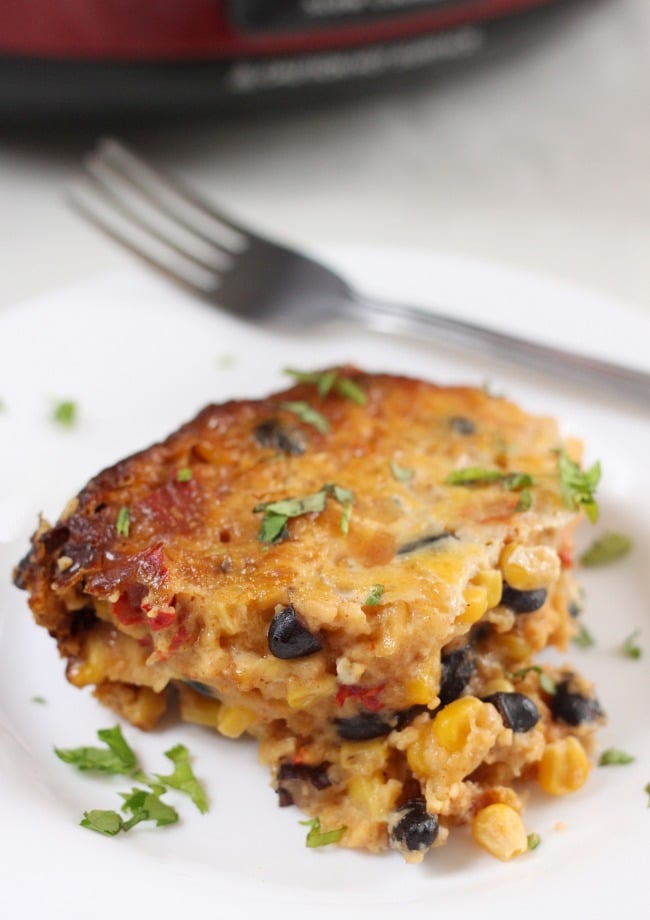 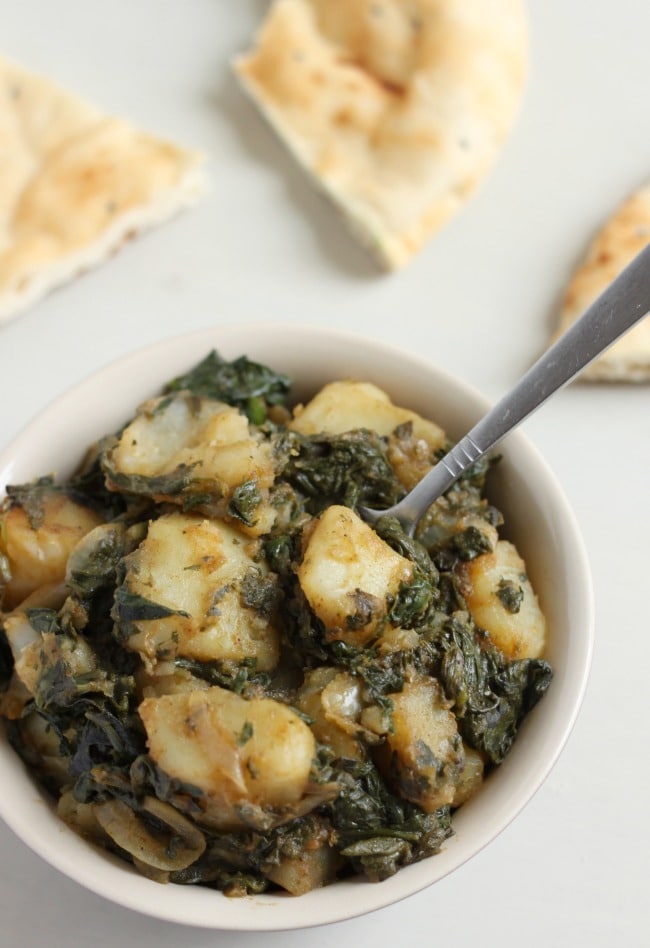 This was more like a frittata and wasn’t my favourite to be honest. I think it will be better cold, served sliced with a green salad. Ended up with about 3.5 hours on high then another couple of hours on low.

This recipe sounds yum and I'm thinking of doubling it for my larger slow cooker (and family)! Do you think there will be any problem doing this? I'm new to slow cooking. Many thanks!

I just found your site and tried this recipe yesterday and...absolute success! I've brought in little tubs of it for a couple of my slow-cooking fan co-workers to try. Thank you so much for this yuimmy, easy, cheese-y dish!

Brilliant! So glad it worked out well for you, thanks for the lovely feedback :)

In my 3qt-ish crockpot, which only has low/high, it was quite done by 6hrs. Might not have needed that long, it looks quite well done. Unfortunate since I put it in about 10 hours before it was needed, thinking low would take longer than the medium time listed.

I can't say for sure whether it's overdone, or anything for the taste, as dinner isn't for 3 and a half hours.

I made this for a weekend breakfast and didn't fancy leaving my slow cooker to do the work overnight so I just made us two individual dishes and popped it in a moderate oven for just under an hour then half an hour a bit hotter to make sure the egg was cooked. Didn't fancy cheese so left it out, but could have added an extra egg? I also left out the butter, and my goodness, the whole thing was super delicious. I use prepared coriander puree to reduce wastage and just squeezed a bit in before cooking. I have hot chilli powder and use it all the time, but users should beware it is HOT especially when using another spicy ingredient, like the jalapenos here. Will definitely make again with various off-the-cuff variations! I have pictures of my dish, if you are interested :)

Sounds yummy, so glad I inspired you! I can never follow a recipe either, even when it's one of my own, so I totally understand the urge to adapt it :) I'd love to see your pictures! It's probably best if you drop them on my Facebook page (http://www.facebook.com/easycheesyveg) or tag me on Instagram @easycheesyveg