Let your appliance do all the hard work to make this spectacular slow cooker French onion soup! It's rich and flavourful, and topped with a giant cheesy crouton.

If you like it when your dinner cooks itself, you'll love this slow cooker French onion soup. It's rich and earthy, sweet and tangy, and all-round wonderful. Add a super cheesy crouton, and you may as well just marry it now.

I'm so excited to get my slow cooker out of the cupboard, now that the weather's cooling off. There's nothing better than an appliance that takes a job off my hands (notable mention to my other best buddy, the dishwasher).

A slow cooker is the perfect low effort appliance. Just chuck in a few raw ingredients (which in this case literally took me about 8 minutes), leave it to cook throughout the day, and dinner's made itself. Hurrah!

Soup is the perfect thing to make in a slow cooker, as whatever you add has plenty of time to cook down beautifully, intensifying the flavours. Often, the amount of time you cook soup for isn't hugely important, so if you're not quite ready to eat when the soup's ready, it probably won't mind simmering away for another hour or two, until you're hungry.

What is French onion soup?

French onion soup is incredible. It's a brothy soup, with plenty of pieces of soft, sweet caramelised onions throughout. The broth is intensely flavourful - sweet and earthy in equal measures.

And best of all... French onion soup is often served with a thick, gooey, cheesy crouton. Just in case you thought it couldn't get any more wonderful.

Step 1: Add the soup ingredients to the slow cooker

Before I get too carried away with that cheesy crouton, we need to make the actual soup. Obviously the main ingredient is onions, but there are a few other ingredients to add to the slow cooker too, which all combine to make a seriously tasty broth:

It all melts together, along with the juices from the onions, and creates an incredible soup.

Give everything a good mix, and leave it to cook in the slow cooker. I prepared my soup after breakfast, and it was ready to eat by dinner time - about 9 hours. The long cooking time gave the onions a beautiful deep brown colour, and really intensified their flavour.

If you don't have as much time on your hands, it will be fine to eat after about 6-7 hours, but it won't be quite as rich in colour or flavour.

You can eat French onion soup on its own (which is still really tasty!) - if that's what you'd like to do, you're already done. Seriously easy, right?

However, I'd highly recommend doing one more thing...

The enormous, cheesy crouton that you often find on top of a bowlful of French onion soup is the perfect way to finish off the recipe.

The underside of the crouton soaks up a little of the broth, while the top is covered with a blanket of gooey melted cheese.

Traditionally, the crouton is grilled right on top of the soup. As long as your bowl is heat-safe (don't use a plastic bowl, for example!), you can heap the bread and cheese right on top, and stick it straight under the grill (broiler).

I'd recommend allowing the grated cheese to cascade down over the side of the piece of bread, rather than being too tidy with it... the end result is like an avalanche of molten cheese that pools in the soup and makes it extra yummy.

What cheese should you use for French onion soup?

Traditionally, the crouton on a bowl of French onion soup uses French cheese - usually either Comté or Gruyère.

To be honest though, I don't like buying expensive ingredients that I only need for one recipe - so I just used a bit of good old cheddar instead. It's very hard to go wrong with a cheesy crouton, so it really won't matter.

Just use whatever cheese you have on hand. It'll be tasty whatever you go for.

What if I don't have any heat-safe bowls?

No problem! If your bowl won't survive under the grill, just cook the cheesy croutons on a baking tray instead, then pop them on top of a hot bowl of soup. You won't get quite the same effect, with the cheese overflowing into the soup, but it will still be delicious.

Can I cook French onion soup in advance?

Yep! This slow cooker French onion soup reheats really nicely, so feel free to cook it in advance of when you need it. I know not everyone has 9 hours to spare before they want to eat each day!

To reheat, you can either bring the whole batch to a simmer in a pan on the stove, or microwave one bowlful at a time. Don't add the cheesy crouton until right before you're ready to eat, otherwise it will get too soggy underneath. 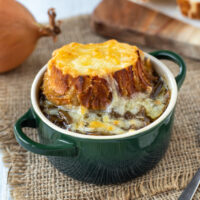 Let your appliance do all the hard work to make this spectacular slow cooker French onion soup! It's rich and flavourful, and topped with a giant cheesy crouton.

For the cheesy crouton: