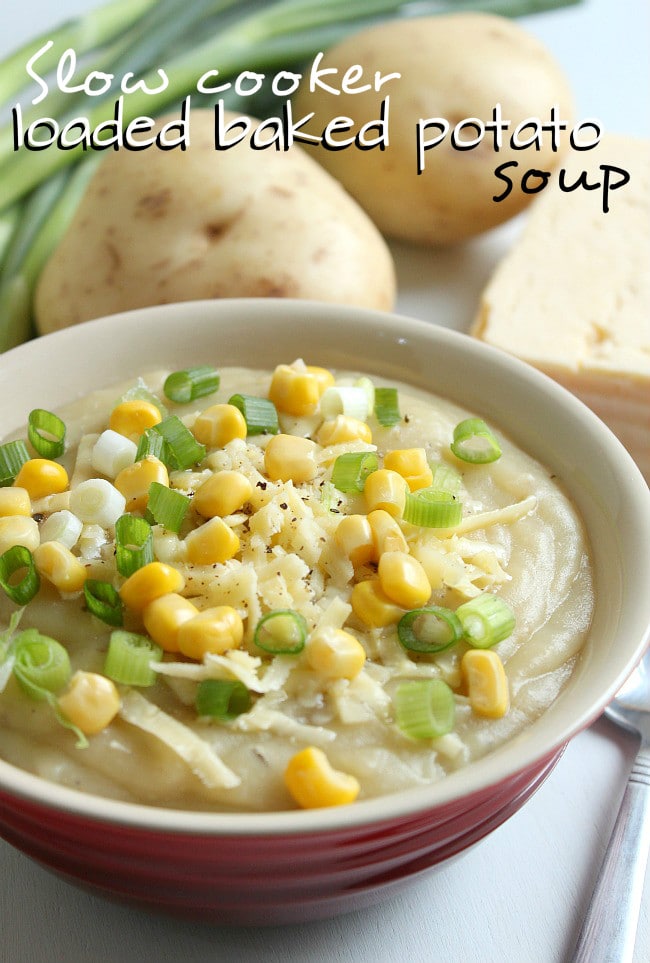 I’m not sure if the way I eat a baked potato is normal. While it’s still really hot, I add my toppings (usually just a dab of butter and some grated cheese) and then I basically just mash it into oblivion. The skin stays intact, but the middle just becomes a messy heap of gooey mashed potato. It’s ace. It’s also the reason I can’t order baked potatoes in public. Does anyone else do this?

The point of loaded baked potato soup is that it kind of ends up resembling my mash – a thick potatoey soup, loaded with your preferred baked potato toppings, ready to all be mashed together. 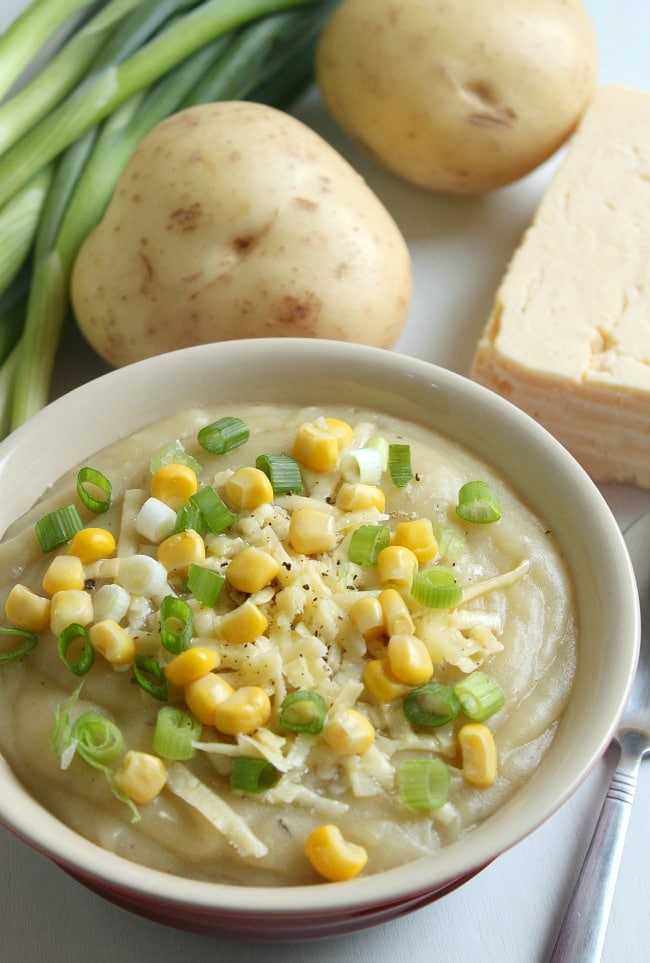 Baked potato soup is what I would call ‘the most comforting thing ever’ – soup is always pretty good to have on a cold day, but make that carb-loaded soup and you’ve taken it to the next level. I suppose the potatoes in this soup aren’t technically baked, but that’s neither here nor there. And in fact, making this soup in the slow cooker makes it even better than if you’d had to faff around with your oven for hours (the only downside of normal baked potatoes) – I chopped a few potatoes before I went to bed, and by the time I woke up, I had soup!

(Disclaimer: it does take a tiny bit more effort than that. But only a little.) 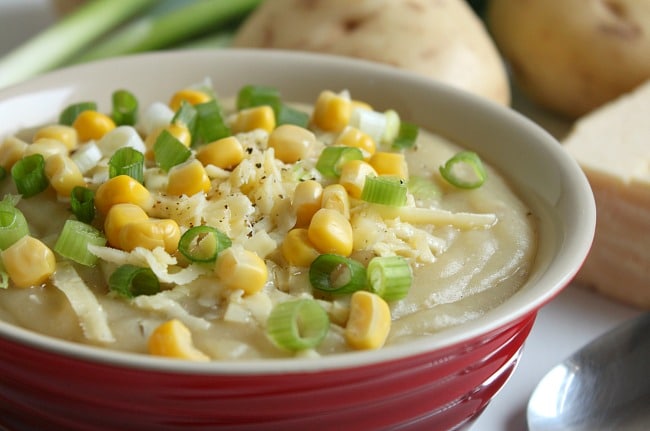 You can top this soup with whatever you like (I love soups that need topping) – I went for cheese, spring onions and a bit of sweetcorn. Think of what sort of things you enjoy on a real baked potato and go from there. I’m thinking, crumbled (veggie!) bacon, chives, maybe a dollop of sour cream? Let me know if you come up with any amazing combinations!

My soup is fairly dark in colour because I left the skins on my potatoes. That’s where most of the nutrients are, so I try not to remove them if I can avoid it (plus I’m lazy and leaving the skins on means one less job to do). If you want a lighter soup, though, you can just peel your potatoes first. 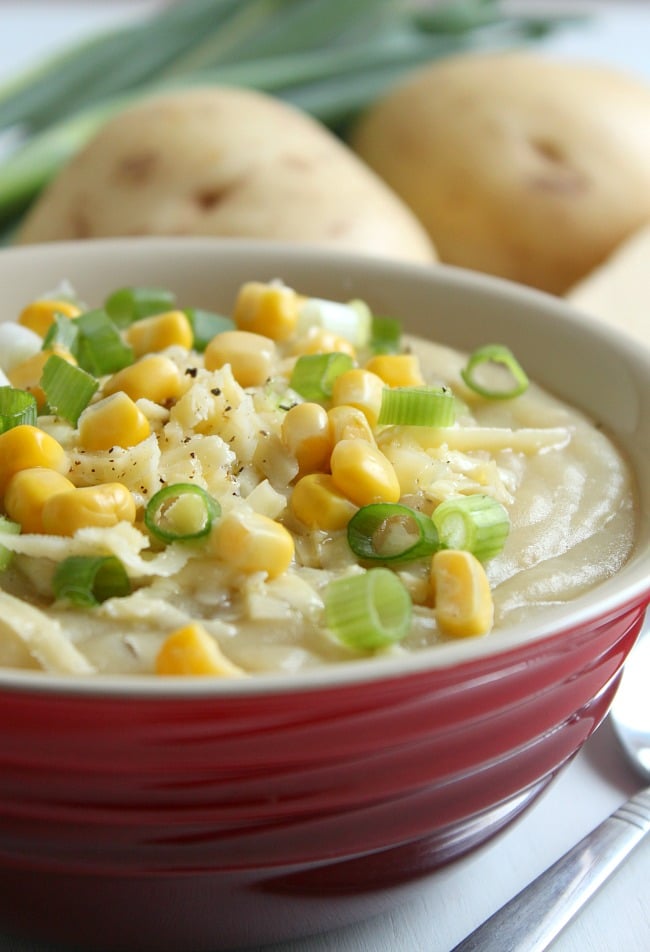 By the way – you’ll notice I cooked this on low for around 9 hours. This was because I wanted to get a good night’s sleep while it was cooking. If it suits you better though, you could probably cook it on medium for a little less time instead. As long as the potatoes get nice and soft it’ll be fine.

Note: this soup should keep for a few days, but it will thicken up a lot as it cools. To reheat, just add it to a pan with a good splash of water and it should thin down again as it gets warm. 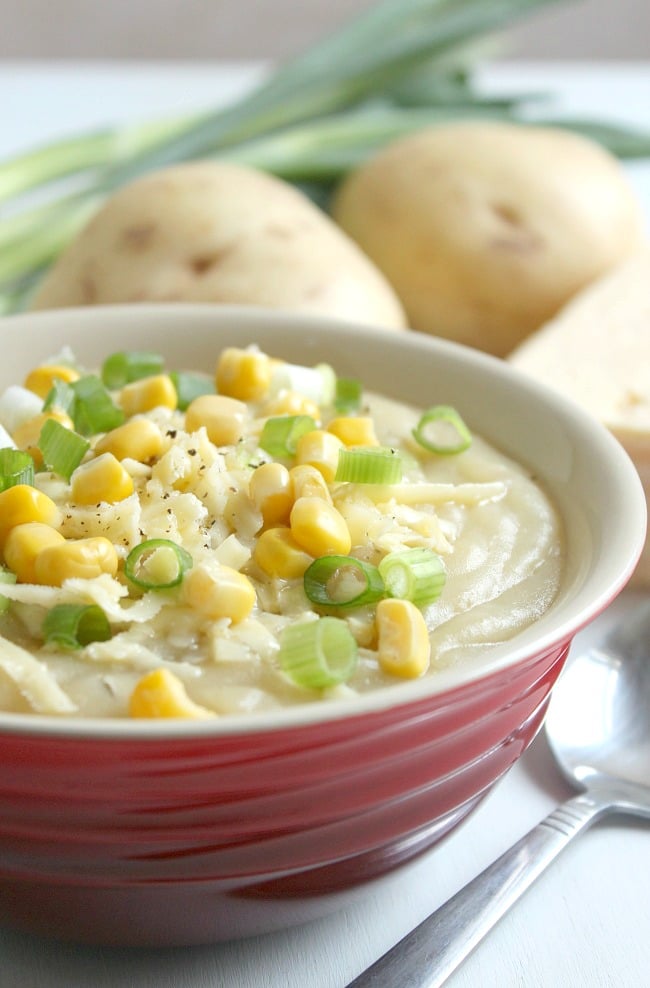 Can you add carrots to this recipe? Also is it ok to cook on High for 4.5 hours? I don't have time to do the low setting. Thanks.

Hi Marni, you could definitely add carrots - it might make it a bit orange though! I haven't tried cooking it on high but it's definitely worth a try :)

For you Americans, 500 ml is equal to a little over 2 cups of stock. I found that I needed to add an additional cup because otherwise it was too mashed potato-y. I think I'm also going to add a little bit of milk to make it a little bit richer :)

I love all the veggies in the soup. I pinned it! Thank you so much for linking up to Saturday Dishes. Blessings and have a wonderful weekend! Diane Roark

Oh my word, this looks like the single most comforting food in the world. I will definitely be attempting this!

This looks so warming! JUST what I need right now! x