If you've ever been to the UK in the summertime, you've probably seen people drinking Pimm's. As soon as the sun comes out, we all flock outside with a big pitcher full of the stuff - and this traditional British Pimm's recipe shows you exactly how we make it!

I'm not sure anywhere else in the world drinks Pimm's - it's a very British drink (the bottle even displays an official seal of approval from the Queen!). So if you're not British, chances are you might not know what Pimm's is.

Confusingly, we use the word 'Pimm's' to refer to two different things:

But since I don't think I've ever seen anyone drinking Pimm's straight, it's never really an issue (you'd get a very funny look if you tried to serve someone a glass of unmixed Pimm's poured straight from the bottle).

What is Pimm's made of?

To make Pimm's, you'll need a good glug of Pimm's No. 1 Cup (which is actually the only type of Pimm's I've ever seen in the shops!). Then you just top up your jug with lemonade.

But there's one more vital element: fruit! Usually some combination of orange, strawberries, cucumber, apples, lemons, and fresh mint. I don't think I've ever seen a jug of Pimm's made without plenty of fresh fruit. It just wouldn't be the same.

Half of the fun of drinking Pimm's is fishing the fizzy bits of fruit out of the bottom of your glass when you've finished drinking. Funnily enough, fruit tastes so much better when it's soaked in booze.

I've drunk Pimm's every summer for over a decade, but when I think about it, the flavour of Pimm's is really hard to describe.

According to Wikipedia, Pimm's is a gin-based liqueur, but I don't actually think it tastes like gin at all (I don't even like gin!). It's just got a fruity, mildly spiced flavour - it tastes a bit like some strange hybrid of Jagermeister, apple juice, and iced tea.

Pimm's has actually got a slightly bitter tang to it - it's not overly sweet - but the lemonade and fruit balance everything out perfectly. Those flavours play a part too - especially the fresh mint, which infuses its way into the Pimm's in a really beautiful way.

How do you drink Pimm's?

We Brits will pretty much drink Pimm's any time it's sunny - it's very much a summer drink. It's not the sort of thing we'd sit and sip in front of the TV in the evening (though no judgement if you do!) - we're more likely to make a jug of Pimm's in the middle of the afternoon on a gloriously sunny day, to drink in the garden with friends.

It's thought of as a pretty sophisticated drink - so much so that it's one of the official drinks served at the Wimbledon tennis tournament, the Chelsea Flower Show, and various other very posh British events. Although it can give you a nice buzz, the aim of drinking Pimm's isn't usually to get drunk.

What type of lemonade should you use to make Pimm's?

Very important: to make Pimm's, you need to use British-style lemonade, not cloudy lemonade. I mean, I guess you could use cloudy lemonade and it would probably still taste great, but that's not what's usually used.

British lemonade is clear and sparkling, and has probably never actually been within ten feet of a real lemon. I believe in some other countries, lemonade is slightly yellow, not sparkling, and is made with actual lemons - which sounds fab, but that's not what is generally used for traditional British Pimm's here in the UK.

Where can you buy Pimm's?

Obviously Pimm's is widely available in the UK - any big supermarket, as well as plenty of smaller shops, will stock it.

If you're in a country where Pimm's isn't commonly drunk, you might need to check larger liquor stores to find a bottle. But it'll be worth the search, I promise - you can laze around in the sunshine sipping a glass of traditional British Pimm's all afternoon. I won't even judge you if you put on a really bad fake English accent. 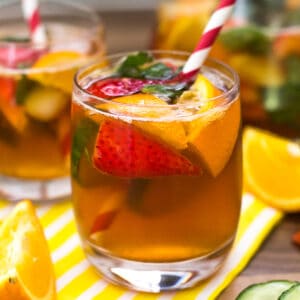 Oh, and by the way, if you like to get your kids involved in the kitchen - I also make a fab kids' version of Pimm's for my little ones - just skip the alcohol (obviously!), and replace the fizzy lemonade with some sort of low sugar squash. They go crazy for it!

Love a fruity summer punch? You might also enjoy my peach and basil white sangria: