One of my most popular recipes ever, with almost entirely 5 star reviews! Its appearance doesn’t do it justice – this lentil bake is incredibly tasty, and so easy to adapt!

As a food blogger who needs to come up with new recipes on an almost daily basis, I don’t often have a chance to revisit old favourites – I think you guys would have a riot if I just posted the same four recipes over and over (…do any of you actually care that much?). But occasionally I just think stuff it, I’m going to repost something I’ve made before. Because sometimes I just want to. You’ll cope.

This very veggie lentil bake is basically a revamped version of a really old lentil bake recipe I posted way back in February 2012 (who even remembers that far back anyway? Back when our biggest problem was the impending end of the world… ah, those were the days).

The recipe was so unbelievably good and the old photos were so unbelievably not good that I thought it deserved a revival. With a new, but equally silly, name. Back then, it was pretty much my favourite recipe in the world, and not much has changed.

A lovely reader recently reminded me of this recipe, and I was inspired to make it again. They tweeted me a photo and called it ‘absolutely their favourite dish’ – colour me chuffed! So just in case you think my own raving about this recipe sounds insincere, rest assured that at least one person agrees with me.

Of course, since I can never follow a recipe to the letter, even if it’s my own recipe, I did make a few minor changes to this version. I made it bigger, for one (it’s that good, you’ll be happy to have extra), and used slightly different veggies, because I was too lazy to go shopping. It’s pretty adaptable – just use whatever veggies you have on hand (I do love a good fridge clearer!).

You can skip the cheese if you’d prefer a vegan lentil bake, but it does add a lovely flavour and gives that crispy topping, which is always a major plus. It’s not exactly an attractive dish, but crispy cheese goes a long way to making anything look enticing.

Whatever you put in it, this very veggie lentil bake is a brilliant way to enjoy some of the most simple store cupboard ingredients! 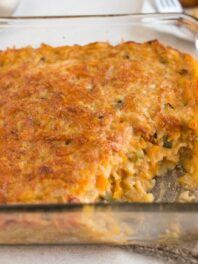 Note: Nutritional information is approximate, and will depend on exactly what ingredients you choose. Information above is for 1/4 of the recipe.

Love lentils? There are loads more vegetarian lentil recipes to inspire you here:

A lovely recipe! Instead of the zucchini & mushrooms, I added colored bell peppers & leeks. Followed the same steps but increased the amount. Used one cup of lentils & one cup of rice. With them, I added 5 cups of liquid. Turned out delicious. A definite keeper.

Thanks Sally, glad you liked it :)

We love this recipe. My husband says it's one of his favorites! Win!

Hi Becca, This recipe looks awesome. What size of dish did you use please? Thanks

@Nancy, would it be OK to prepare the day day before a party? X erica

@Becca @ Easy Cheesy Vegetarian, Many thanks for your reply. Tried it. It was fantastic!

I don’t think I cooked mine properly because after the boiling of the rice and lentils they were complete mush. At that point I only baked the dish for about 10 min but it was still too much. I think next time I would just cook the rice and lentils separately according to their package instructions but stop a few min early since the dish is baked after cooking. If the lentils and rice had held their form I think this could have been tasty.

Hi Michelle, yes I would stop boiling the rice and lentils as soon as they're cooked, you don't need to continue boiling them if they're turning mushy!

All I have is green lentils.... will that work?

Absolutely! It will give a different end result, as green lentils have a different texture to red lentils (they're not as mushy), but I'm sure it will still taste good :)