I have a new toy in my kitchen! It's a multicooker - the Redmond RMC-M4500, to be precise. If you've not used a multicooker before, you might not know what one is, so let me tell you: utter magic. That's what it is. This thing stews, fries, steams, cooks rice, makes soup... you can even use it to bake bread and make yogurt! You just stick everything in the bowl, press the right button, and it does it all for you. I told you, it's magic. It's also pretty attractive, and looked very at home on my countertop next to my other toys: This multicooker comes with a book of 100 recipe suggestions, but since I like to be awkward, I decided to have a go at coming up with something on my own: cheesy Mexican potatoes! And let me tell you, these things are cheeeesy. I used mature cheddar, which added an amazing tang to the potatoes - but feel free to use something more Mexican if you disapprove of my cheddar! A bit of mozzarella wouldn't go amiss either, if you want your cheese to go nice and stringy (definitely not Mexican, but who's going to complain about mozzarella?). This recipe's really easy, especially if you use a multicooker - start by adding the potatoes to the pot along with some onion, chilli and yellow pepper. I cooked it all on the 'fry' setting - just close the lid, and it's all done for you. The default time for this setting is 15 minutes, but I decided to leave it for 20 minutes in the end, so that it all cooked down to my liking. The timings are really easy to adjust. Using the multicooker was much less labour intensive than cooking in a normal pan - instead of having to stir the veg every minute or two to prevent them from sticking or burning, I was able to just close the lid, and get on with the washing up instead (which isn't exactly my favourite activity... but at least it allowed more time for Pinterest later in the day!). After frying up your veg, just add some tomatoes, a few spices, and allll thaaat cheeeese. There's quite a big handful of it... but that's what makes these cheesy Mexican potatoes! If you want to make this potato side dish into more of a full meal, you could swap a few of the potatoes for some beans instead (black beans or kidney beans would work well)! If you'd like to try out the Redmond RMC-M4500 multicooker, you can buy your own here. 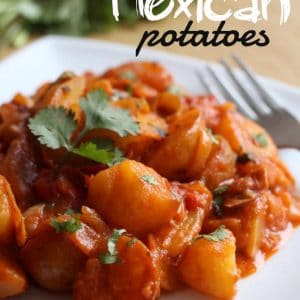 Here's another of my favourite potato side dishes: garlic and parsley fries!