If there was ever a recipe that wholly embodies the name of this website, 'easy cheesy vegetarian', it's Welsh rarebit - and since I'm half Welsh, I thought it was fitting that I share this recipe. It's such a simple one, but if you're a fan of gooey cheese, it's really rather spectacular, and makes a perfect easy lunch.

Is Welsh rarebit the same as cheese on toast?

We Brits are known for our 'does what it says on the tin' kind of recipes, and cheese on toast is one of our best.

It's cheese.
On toast.

You really don't need a recipe for it.

But Welsh rarebit isn't quite the same as a standard cheese on toast. It's a little more interesting - and a lot more delicious - because it uses a gooey cheese sauce, rather than plain slices of cheese.

What is Welsh rarebit?

There are a million stories about how Welsh rarebit came about, where it got its bizarre name from (it's also sometimes known as 'Welsh rabbit' - don't worry, no rabbits were harmed in the making of this dish), and even whether it's truly Welsh or not.

But wherever it came from, it's an incredible dish that deserves to be shared.

Welsh rarebit begins with a super thick cheese sauce, smeared over a crispy piece of toast, and grilled until it's golden brown on top.

It only takes a few minutes more than regular cheese on toast, and it's totally worth the extra effort.

How to make perfect Welsh rarebit

There are all sorts of different recipes for Welsh rarebit.

Some use beer, some don't.
Some use real mustard, and others use mustard powder, or even no mustard at all.
Some recipes use Welsh cheese and others just use cheddar...

Nobody can really agree on just one Welsh rarebit recipe.

So this is just my version!

I begin with a really simple béchamel sauce (white sauce). You can find step-by-step instructions for how to make a white sauce here, but it's essentially just flour cooked in butter, with some milk added.

You can swap a little of the milk out for some beer, if you want some real indulgence.

You need to make the sauce quite a bit thicker than you would if you were making, say, macaroni cheese - otherwise, it will all drip straight off the bread and you'll end up with a big mess. A tasty mess, but a mess nonetheless.

Instead, the sauce should be thick and spreadable - more of a paste, really.

Of course, you can't have Welsh rarebit without plenty of cheese.

Choose a good quality cheese with plenty of flavour. I went for an extra mature cheddar, but a Welsh cheese like Caerphilly would be fitting too!

I also added a dollop of mustard and plenty of black pepper.

Stir it well until the cheese has melted into the sauce and it's all thick and gooey.

Step 3: Spread it on toast, and grill

You can use any type of bread for Welsh rarebit, but I like to use something a bit more special than a mass-produced white loaf. This time I used some slices from a nice crusty bloomer loaf.

I like to pre-toast the bread, so it gets crispy on the underside. Then, spread the thick cheese sauce on top.

Pop the tray under the grill (broiler) for a few minutes until the cheese sauce is bubbly and hot, with crispy golden brown patches on top.

All that's left to do is eat!

How to serve Welsh rarebit

In my eyes, Welsh rarebit is definitely a lunch dish, so I don't tend to do anything fancy with it.

Just a bit of salad on the side is perfect - perhaps some lettuce, tomatoes, or cucumber.

A lot of people splash their Welsh rarebit with a few drips of Worcestershire sauce just before serving. The issue is that Worcestershire sauce isn't actually vegetarian - but Henderson's relish is a good vegan substitute. It's a pretty specialist ingredient, but you can find it online if needed (Amazon US / Amazon UK). 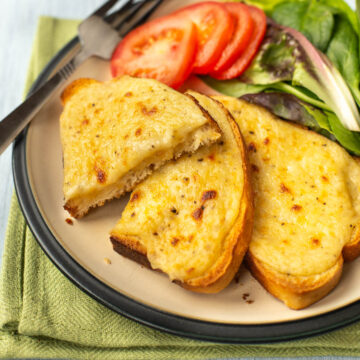 For a richer flavour, you can replace a little of the milk with a splash of beer (light or dark, depending on how strong you want the flavour to be). As this is such a simple recipe, make sure you use a good quality bread and a flavourful mature cheese.