The lovely Julia of The Roasted Root has only gone and done it again, with her new book, Let Them Eat Kale! Which is pretty much the best cookbook title ever, by the way. I’m already envisioning a whole series of books titled with kale-based puns (I’m thinking ‘Have Your Kale and Eat It’ will be next, perhaps followed by 'That Takes The Kale' and maybe 'I Love You Like a Fat Kid Loves Kale').

Anyway, since I love you guys so much, and Julia loves you all too, she’s generously allowing me to share one of the recipes from the book for you today.

Here’s a small confession: this was the first time I’d ever cooked with kale (I know, scandalous). It’s pretty much the trendiest superfood there is these days, but it seems to be less prevalent in the UK than in the US, so it’s just not something I’ve ever thought to try. Let’s be honest, superfoods aren’t always the tastiest thing on the planet. But, considering the fact that kale is absolutely packed (and I mean packed) with vitamins K, A and C, along with many, many other good things, I welcomed the opportunity to give it a go.

Well, it turns out kale is a bit like quinoa - stupidly healthy and nutritious, but absolutely delicious at the same time. Who knew! (apart from Julia, obviously…)

There were a million recipes in Let Them Eat Kale! that I was seriously tempted to feature today: savoury cheesy kale pancakes; superfood breakfast tacos; southwest stuffed bell peppers; zucchini, kale and leek fritters; BBQ black bean, kale and sweet potato burgers… I literally created shopping list after shopping list because I kept finding something I wanted even more and started over again.

Eventually (eeeeeveeeentually), I settled on this creamy portobello and kale quinoa bake - because what better way to introduce myself to kale than with a recipe that contains ricotta, cream, parmesan and mozzarella?

Despite how it might sound, this dish isn’t overwhelmingly rich - there are plenty of vegetables, as well as juicy chopped tomatoes, to stop it being entirely dairy. It ends up beautifully creamy, but still tasting nutritious.

I did make a few small changes to the recipe - since kale is less popular in the UK, I couldn’t get my hands on the dino kale that Julia recommends, so I used curly kale instead, which worked just fine. I also adapted it to the British format, since that’s the way we do things round here - if you’d like the American format, you’ll just have to buy the book. 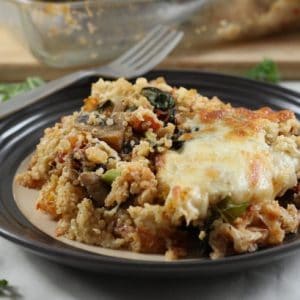