I adore these burritos.

The main reason is that I've recently discovered sriracha (I know, where have I been for the last 2+ years?), and I'm bloomin' obsessed with the stuff. I know everyone else in the world loves sriracha, and I always thought, surely it can't be as good as everyone says it is? It's just hot sauce, surely it's just the same as every other hot sauce out there?

Well, when I first tried it I thought it was really nice, but nothing particularly special... and then I found myself putting it on absolutely everything in sight. I honestly think it would be good on a roast dinner. Or peanut butter on toast. Maybe even a banana.

Perhaps it's drugged? Sneaky bit of cocaine in your hot sauce to get you hooked?

Sorry, that was inappropriate.

The point is, these garlic mushroom burritos are amazing! Garlic mushrooms are pretty awesome on their own anyway, but add spicy sriracha rice, and you've got the best burrito in the world. And serve them alongside some crispy sweet potato fries like we did at the supper club, and you've got a meal that I could happily eat every single day (probably with more sriracha each day due to building up a tolerance...).

If you love the sound of sriracha rice but you're not much of a mushroom fan, you could switch them out for a veggie of your choice. Most things will work! Or, of course, you could skip the burrito altogether, and just serve the sriracha rice as its own dish (personally I'd recommend a large bowl and a spoon, much like this).

These burritos freeze really well, by the way. Just wrap them tightly in a bit of cling film before cooking them, and pop them in a freezer bag. You can either leave them in the fridge overnight to defrost, then bake in the oven (take the cling film off first) - or, if you're not too concerned with having crispy burritos, just shove them in the microwave (make sure you don't do this if they're wrapped in foil!!!!). They're a great thing to have in the freezer for nights when you want something homemade, but just can't bring yourself to move.

(so don't panic when you realise that this recipe makes 10 burritos! Just pop them in the freezer!) 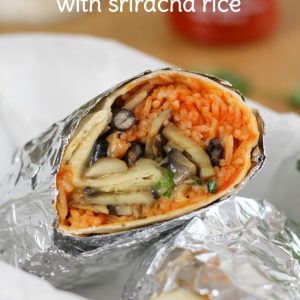 For the sriracha rice:

For the garlic mushrooms:

To assemble the burritos:

You will also need: 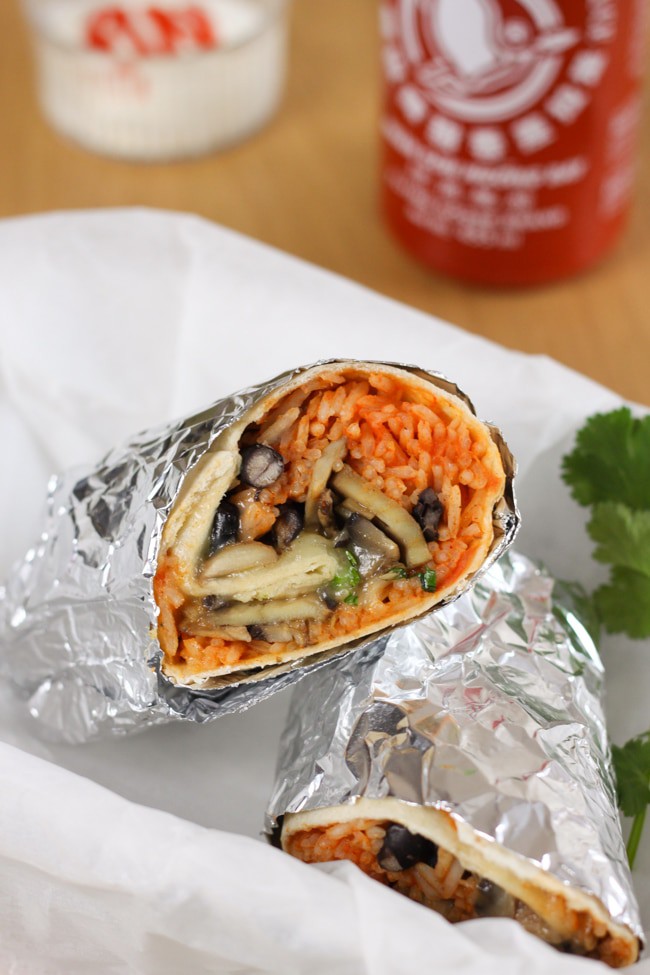 Here's another of my burrito recipes - kale and avocado burritos. These are so good!