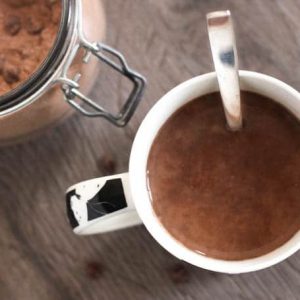 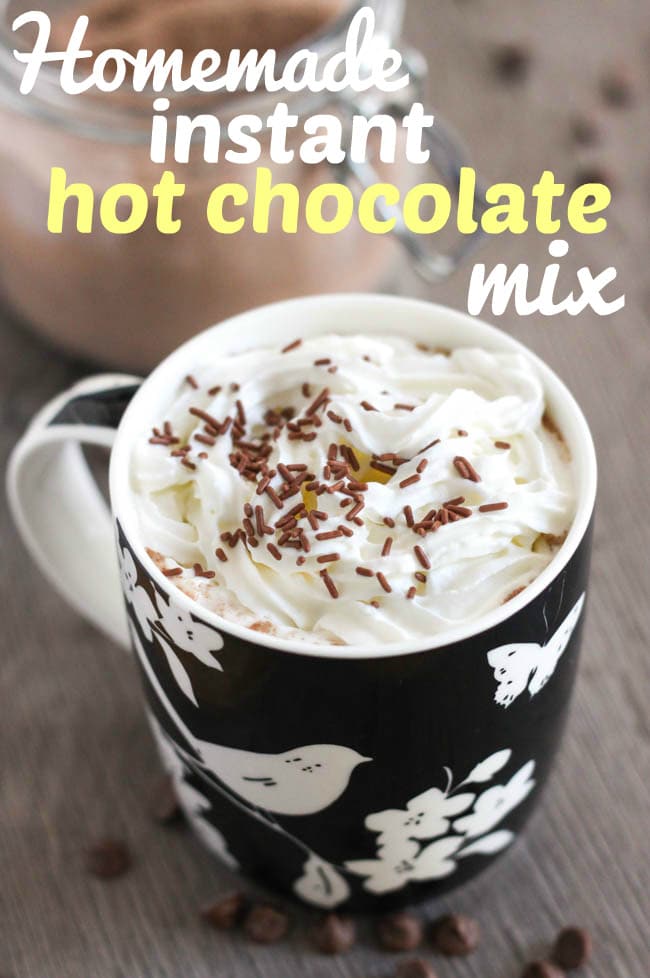 The reason why I’m sharing this creamy homemade instant hot chocolate mix today will soon become apparent, but first I want to talk about a kettle. The humble electric kettle.

A good cup of tea is pretty much a British institution, so it’s no surprise that near enough every British kitchen contains an electric kettle. I think I’ve heard that they’re not that common in some other parts of the world (even in the USA, right?), but here it would be pretty much unheard of not to own one. How else are you going to offer your guests a quick cuppa?

It has officially been 60 years since Russell Hobbs released the world’s first fully automatic electric kettle way back in 1955 and revolutionised the way we boil water forever – hence the homemade hot chocolate mix, which just needs a bit of boiling water poured over the top to make a hot, creamy drink (a real necessity at this time of year).

A couple of weeks ago I attended an event thrown by Russell Hobbs to commemorate the electric kettle’s 60th anniversary. We learned a little about the history of the kettle (who knew kitchen technology could be so interesting?), and even had a little tea-tasting session (that’s not me in the picture, before you compliment me on my blonde hair!). 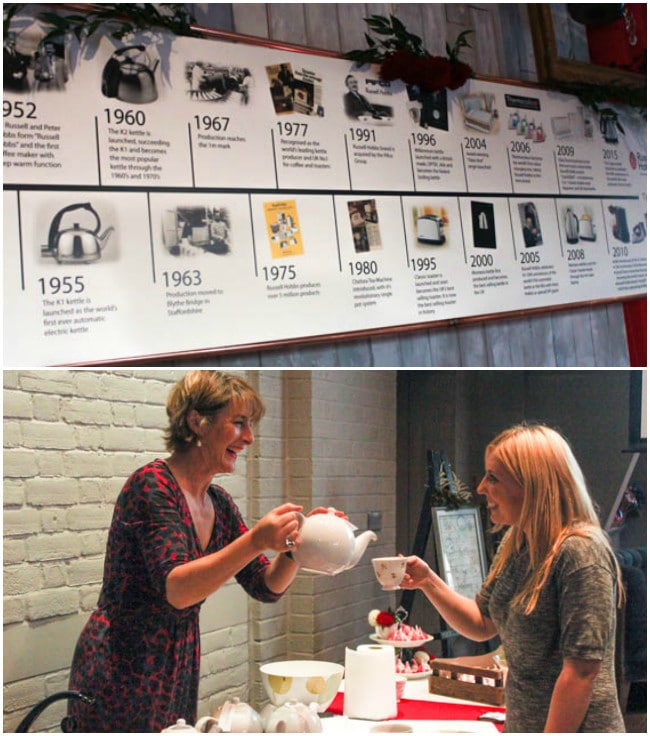 But before you go thinking we British are more civilised than we are, I should probably tell you that we didn’t just sip tea all night – there were also three different tea- and coffee-inspired cocktails on offer, which went down a real treat. 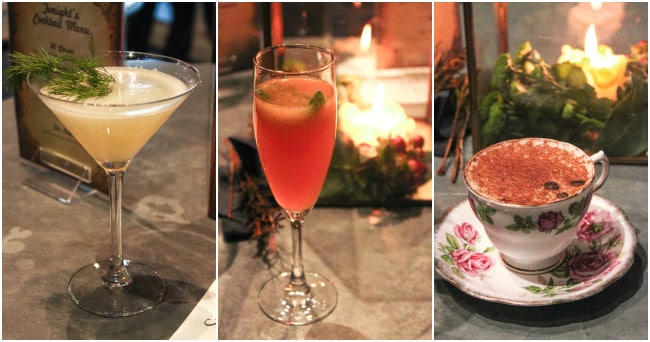 – the K1 Classic (named after Russell Hobbs’ revolutionary 60 year old kettle), with gin, lime juice, cucumber, and tea-infused dill syrup
– the Russell Hobbs Diamond, with vodka, green tea, peach, and basil
– the Legacy (served in a tea cup to make it the most British-looking cocktail ever), with vodka, Kahlua, coffee, and Aztec chocolate bitters

I know what you’re thinking and yes, I was indeed in heaven. My favourite was the K1 Classic – so good, and there’s nothing like a martini glass to make a girl feel sophisticated.

Russell Hobbs have recently released a Special Edition of their Legacy design kettle, to celebrate the electric kettle’s 60th birthday. It’s attractive and ergonomic, but it also has the number 60 hidden in the shape of the handle – see it? Clever, that! 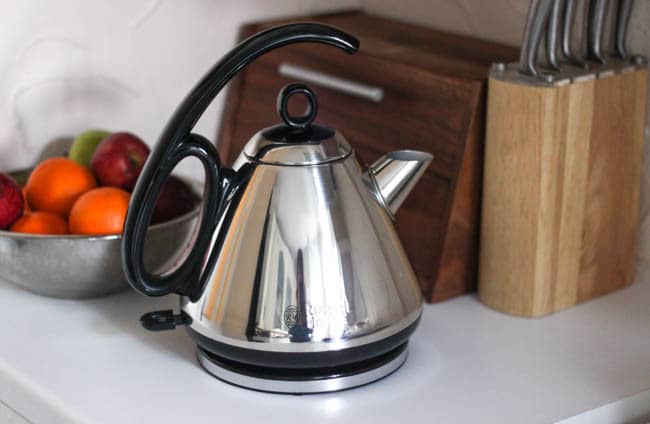 I put my Special Edition Legacy kettle to good use on my homemade hot chocolate mix.

In the past I’ve always preferred a hot chocolate to be made with milk rather than water – they’re usually so much more creamy and satisfying. But, I hate faffing around with heating milk – if I put it in the microwave it inevitably boils over or gets a terrible skin on it… no good. Hot chocolate made with water is so much more convenient. 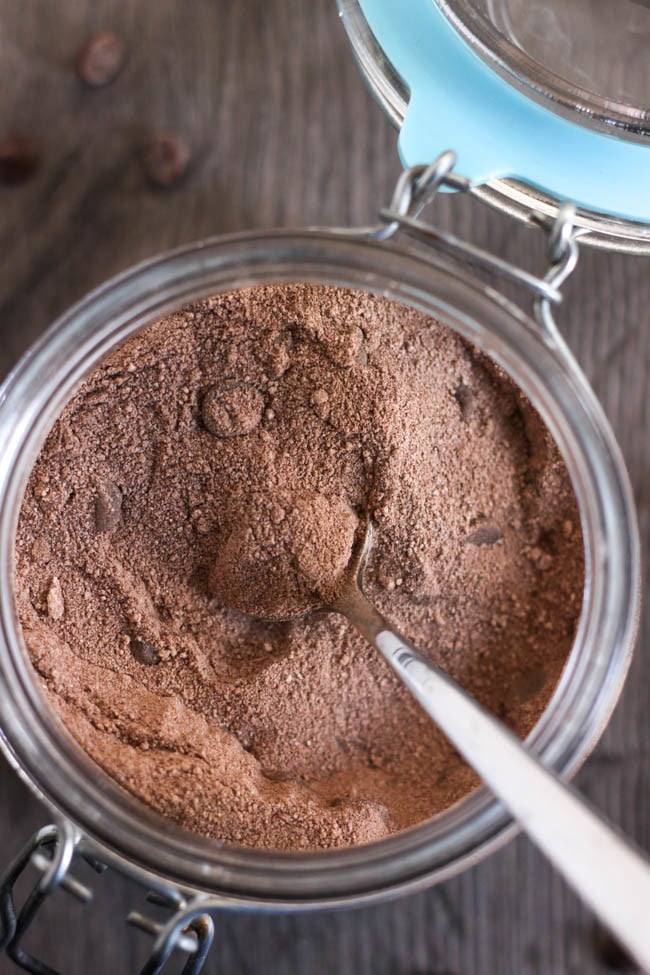 So, I set about trying to find a way to make a rich and creamy hot chocolate using just boiled water. The secret: milk powder! I fell in love with it when I made my homemade instant oatmeal (a big batch of which still gets made every few weeks, by the way), and my love has not waned since. It’s a great way to add creaminess to a recipe without needing to use ‘real’ milk.

I have one other secret ingredient as well (what proportion of a recipe can be ‘secret ingredients’ before they just become ‘the ingredients’?) – milk chocolate chips! I know, they add a little extra naughtiness to the recipe, but they also make it super rich, and help to get rid of that watery taste. 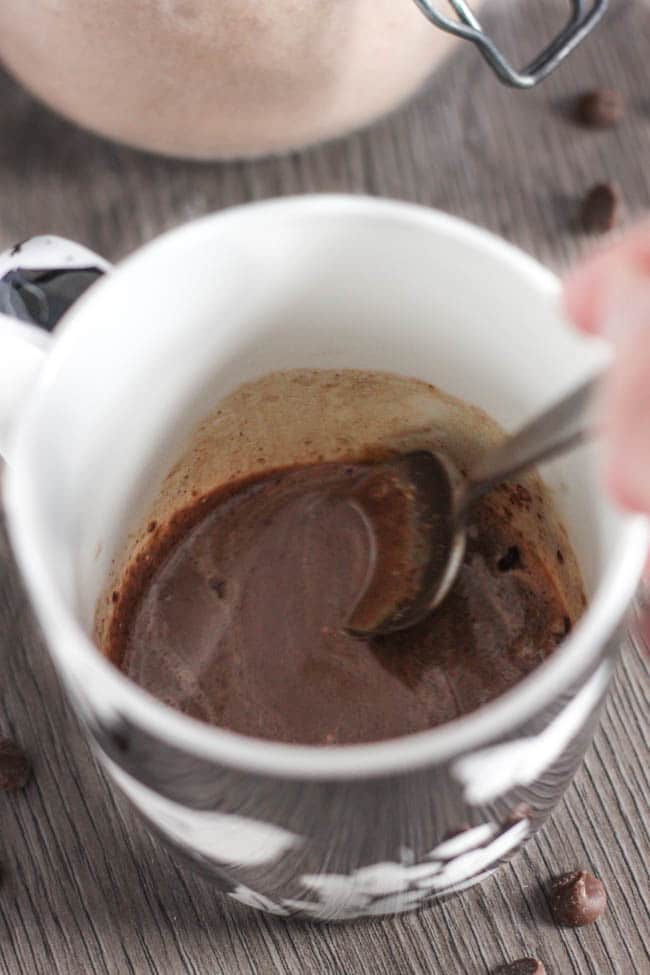 Once you’ve mixed your milk powder and chocolate chips with some sweetened cocoa powder (or unsweetened cocoa powder and some separate sugar, if you prefer), just pour over your boiling water. To avoid lumps, I like to add a couple of tablespoons of hot water to begin with, mix it to form a paste, and then top it up with more water. You need at least two or three heaped teaspoons of the hot chocolate mix to make one mugful of hot chocolate, but to be honest more is more in this recipe, so use a couple of extra spoonfuls for a really rich and creamy drink. 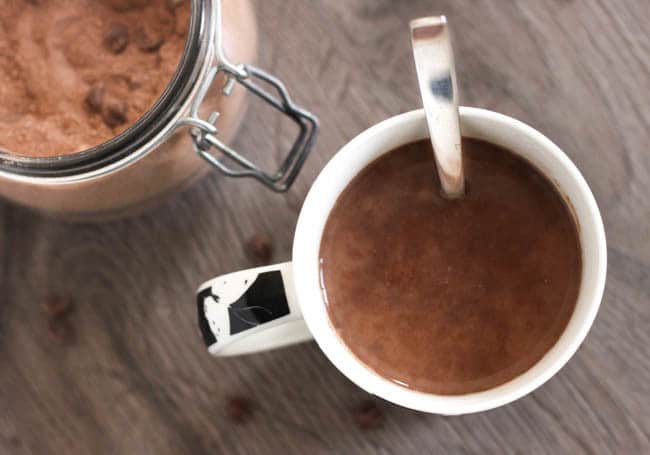 The rest can be stored it in an air-tight container until you’re ready to use it.

Oh, and if you’re very much in need of a pick-me-up, it’s fantastic with a little whipped cream and some sprinkles! 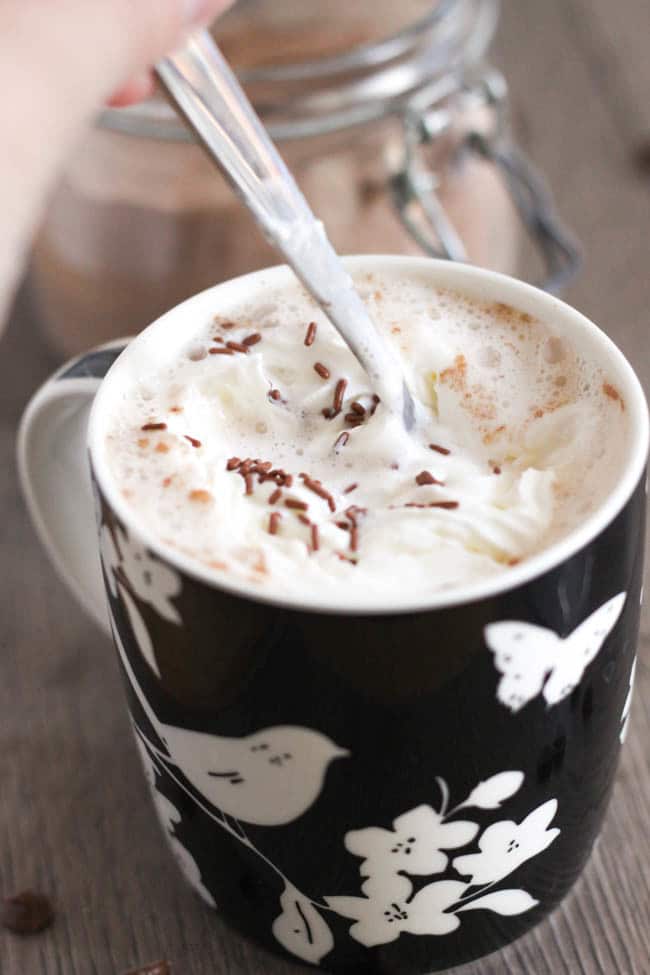 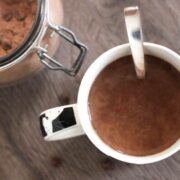 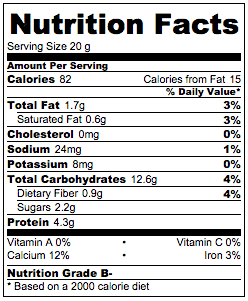 Note: nutritional information is approximate, and will depend on exactly what ingredients you choose. Information above is for 1/12 of the batch. 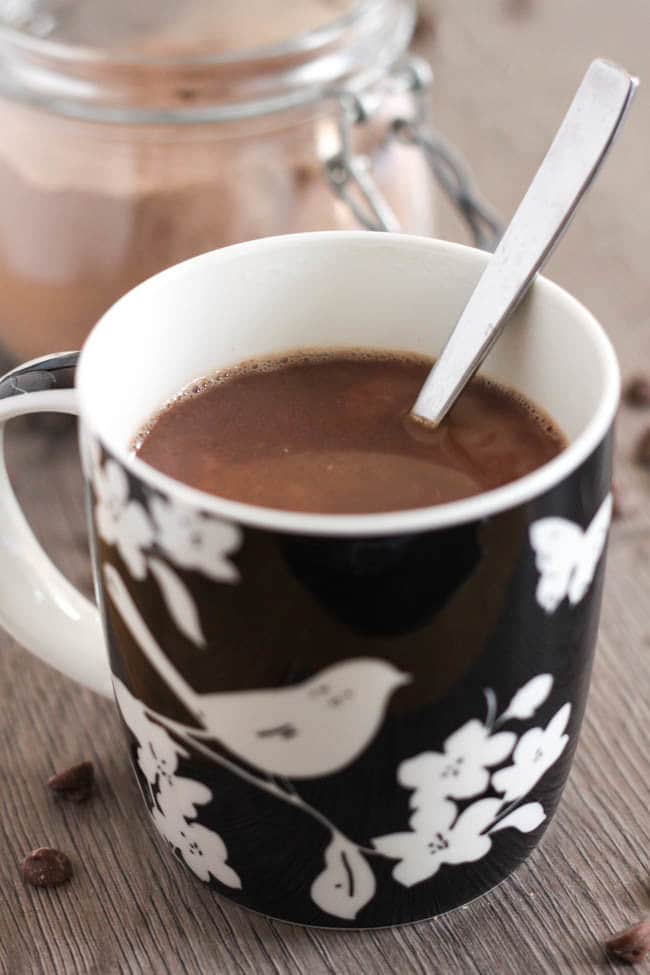 Here’s another recipe that can be brought to life with just a dash of boiling water – homemade instant oatmeal! 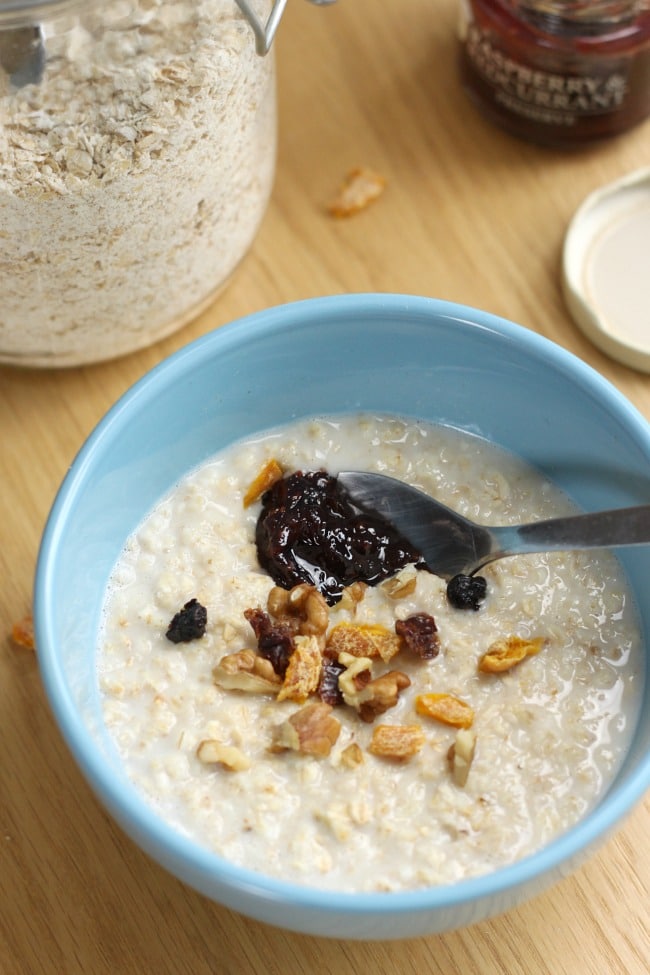