In the UK, we have something called ‘eggy bread’. We like our simple recipe titles over here (see: cheese on toast, beans on toast, mushrooms on toast… not toad in the hole), so eggy bread is exactly what it sounds like: bread, dipped in egg, then cooked.

I’m pretty sure that the much more exotic sounding French toast is just a fancier name for eggy bread, but I tend to use the term in a slightly different way. To me, French toast is like eggy bread on steroids. More ingredients, more flavour, much more fanciness…

Eggy bread is something you eat cuddled up on the sofa, dipped in a big squirt of ketchup; French toast is something you’d serve to guests (or eat for a fancy Christmas breakfast, maybe?).

Whatever your definitions, this savoury French toast was infinitely more special than the eggy bread I’ve made uncountable times.

I know I tend to use a bit too much cheese in my recipes (ahem, don’t say a word), but although this recipe seems super cheesy, I was actually fairly modest with my cheese usage - a little goes a long way! You just need a couple of thin slices of mozzarella to stuff your French toast with (this is what causes the ooey gooey filling that oozes out when you cut into it), and a little bit of parmesan to sprinkle over the top. Make sure you do this while it’s still in the pan, so it goes nice and crispy! The contrast between the soft, gooey filling and the crispy edges is just amazing.

Oh, and don’t forget the garlicky leeks to scatter over the top. Got to have some vegetables with your brunch!

I only made enough for one person (nobody else was going to get a look in anyway), but you could easily scale this recipe up to serve 3 or 4 people if you have a big enough frying pan. Just make sure you cook everything over a fairly low heat, so the egg has time to cook all the way through! 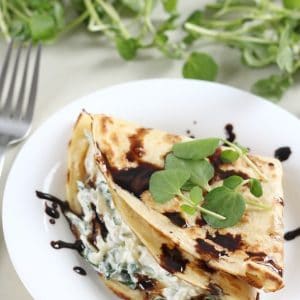