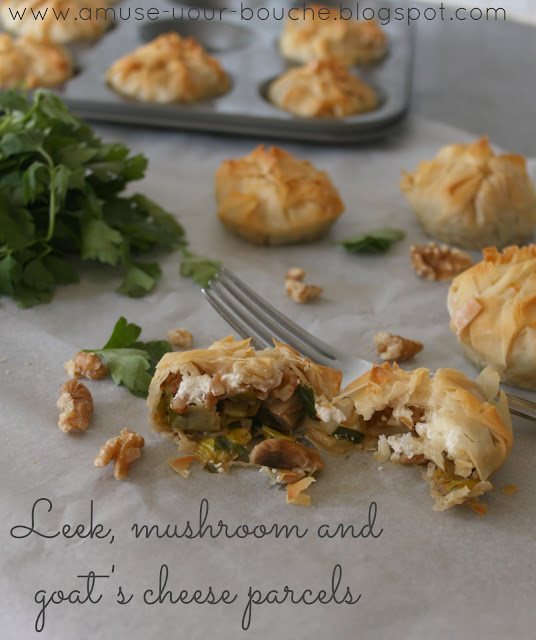 So – two goat’s cheese posts in a row. It doesn’t bother me whatsoever, how about you? 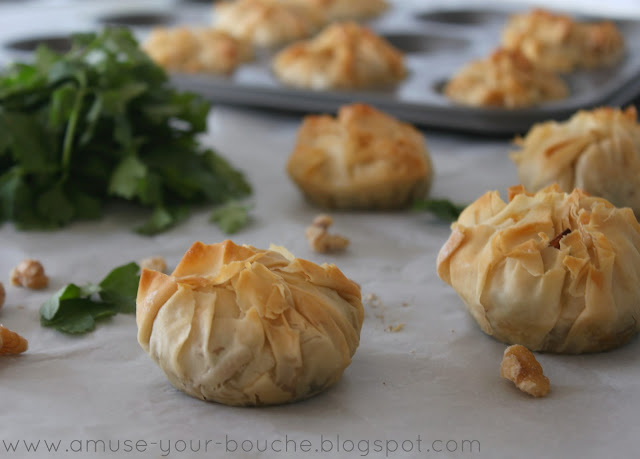 I have a bit of a soft spot for pastry, but obviously it’s not the most healthy thing to eat on a regular basis. Enter filo pastry (or phyllo, or however you prefer to spell it) – far fewer calories and far less fat than puff pastry. Plus, you only need a couple of thin squares of it for each little parcel, and if you use a low-calorie cooking spray between the layers rather than melted butter, you’re saving yet again. 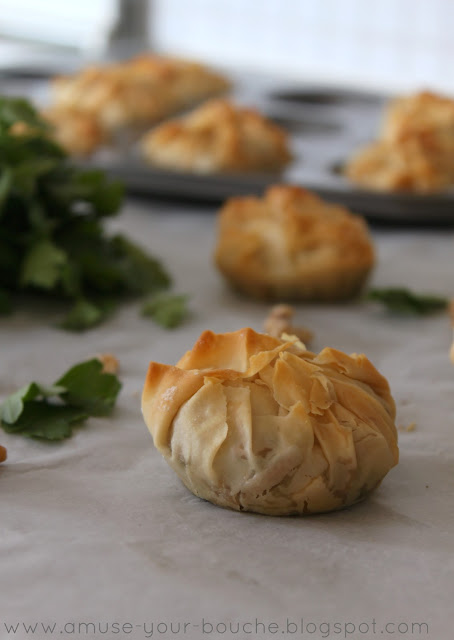 These little parcels would be perfect for cocktail parties – you know, those parties you throw where you pretend to be really posh and sophisticated by serving canapés, when really they only took you half an hour to throw together, and if you didn’t have guests you’d happily be eating them one after another straight off the tray. (No? Nobody else does that?)

You could also make half as many larger parcels, and then serve them with a salad or a sauce for a great vegetarian appetiser. 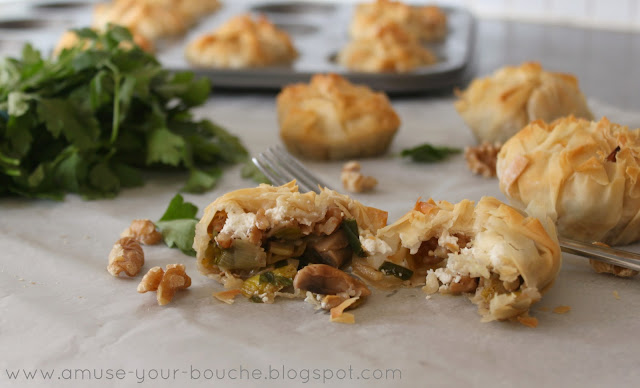 Feel free to make these your own with different cheeses, different veg etc. – I was sorely tempted to use brie but thought the goat’s cheese would go better. Maybe next time. I made my boyfriend some without the walnuts (he’s not a fan), and they were great too, so I guess the nuts are optional.

Heat the olive oil in a large frying pan, and cook the leek, garlic and mushrooms over a medium heat for about 10 minutes, stirring regularly, until soft. Set aside to cool.

While the leek mixture cools, prepare the remaining filling ingredients. Chop the parsley, and add this to the leek mixture. Also roughly chop the walnuts, and roughly crumble the goat’s cheese.

Cut the filo pastry into 20 squares, measuring at least 10cm square (if you’re prone to tearing filo, you might prefer to use 30 squares – 3 layers per parcel. I found 2 was enough).

Lightly spray a cupcake tray with low-cal cooking spray, and gently press one square on filo into one of the cups. Give one more spritz of oil before placing another square on top, at an angle. Fill with a tablespoon or so of the leek mixture, and top with a few pieces of walnut and some goat’s cheese (if you’re not too good at eyeballing quantities, you might like to separate these ingredients into ten portions before beginning to fill your parcels).

Gently fold up the sides of the parcel, and pinch very gently at the top to hold the parcel closed. If your pastry tears, or you find that your squares aren’t quite big enough, you can crumple an extra piece of pastry on top to help close the parcel.

I wish you could offer a unit translation for US fans. My iPhone free unit conversion just doesn't make sense for cooking/baking.

Would love to try this out but don't want to make an inadvertent mistake, thus not knowing if it worked out or not.

Hi Kathy! All of my recipes from 2015 onwards have US conversions listed in the recipes :) I'm afraid I haven't had time to go back through all my archives, but hopefully there's something from the past 3 1/2 years that you like! :D

Do you think these would freeze well? And if yes, before or after baking? Trying this recipe tonight. Thank you!!

To be honest I don't freeze things very often so I can't say for certain, but I always think everything's worth trying once! Hope you enjoy them :)

Wow these look like a delicious amuse-bouche! Thanks for sharing :)

mmm i am just imagining the sound of the crunch of the flaky pastry as you bite in it and the warm goat cheese filling your mouth. also i just got all my wisdom teeth pulled, and with the lack of eating crunchy foods, it is really exciting me right now.

Eek I hope your mouth's ok! You'll be eating crunchy stuff again in no time :P

These look delicious. Perfect for a cocktail party.