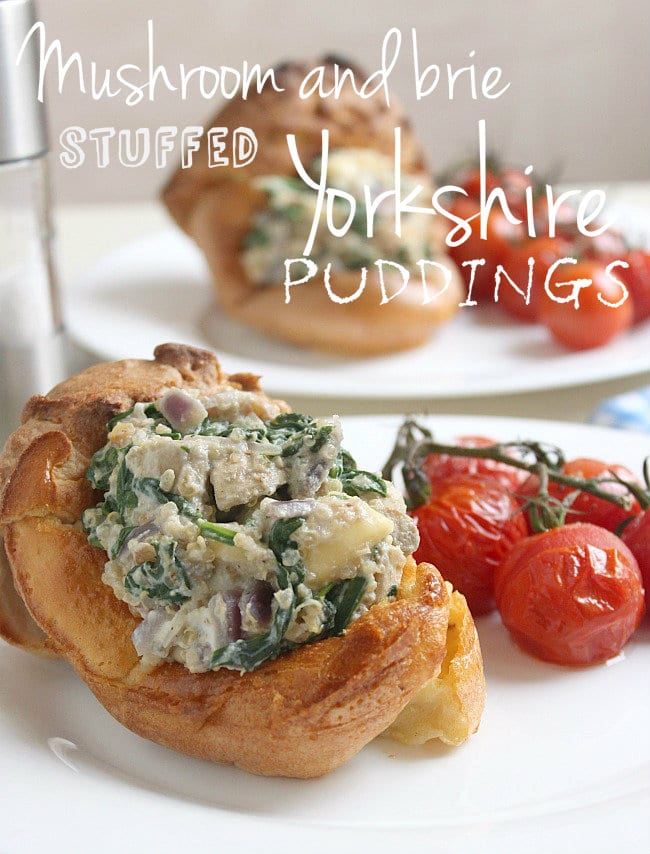 Happy Thanksgiving, American friends! I hope you’re all stuffing yourselves silly. Obviously we don’t celebrate Thanksgiving here in the UK but I am a bit jealous that at this time of year you have two holidays that are based around food. I do find it a little odd that you put marshmallows on your sweet potatoes, but I still think I could manage to eat Thanksgiving dinner without toooooo many complaints.

I guess now that the blogosphere is done with Thanksgiving, attention will turn to Christmas (yay!), so I thought today I’d share a recipe that would be perfect as a vegetarian option for your Christmas dinner (or any other roast dinner through the year!). These individual stuffed Yorkshire puddings are crammed with loads of tasty bits. I tried to make the filling quite protein-rich so that it can take pride of place in your vegetarian Christmas dinner, rather than having to have some sort of fake meat (which I do enjoy, but it’s nice to have something different occasionally). They contain quinoa, walnuts and cheese, as well as mushrooms and spinach… basically every delicious thing on the planet. 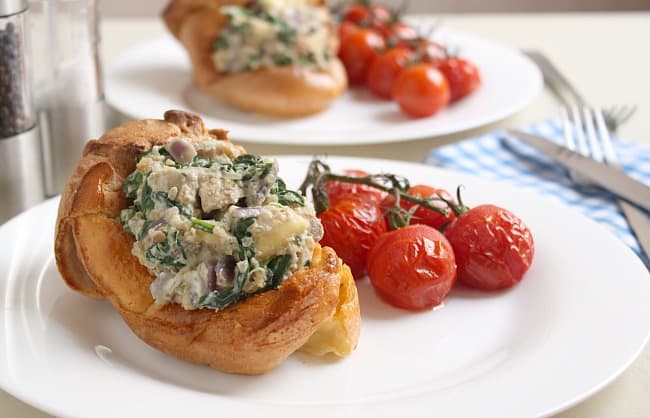 In case you don’t know, Yorkshire pudding is a traditional British dish that’s basically just a pancake-like batter that’s cooked until it’s nice and crispy on the outside, but soft on the inside – and it’s awesome. You can either cook one big one and cut it into pieces, or make individual ones like I did. They’re actually really easy to make – the trick is to get your oil really hot in the oven before adding the batter, and then glueing yourself to your chair for twenty minutes or so to stop yourself from opening the oven door. It’s a tense wait, and I’m never quite sure what I’ll see when I finally open the door, but it usually works out okay! They rise a lot (these photos were taken after they’d sunk a little) – you need to allow a good few inches of space above your dishes otherwise they’ll cook themselves onto your oven shelves, which isn’t fun (of course I’ve never done this though…).

Yorkshire puddings often feel like a bit of an indulgent luxury – things that don’t really add much nutrition to your meal, but are just a tasty extra on the side. Stuffing them with something a bit more nutritious (but still a bit indulgent, let’s face it) means that they’re no longer an optional extra. If you’d also like to give your Yorkshires the attention they deserve, you can find the recipe over at Great British Chefs. 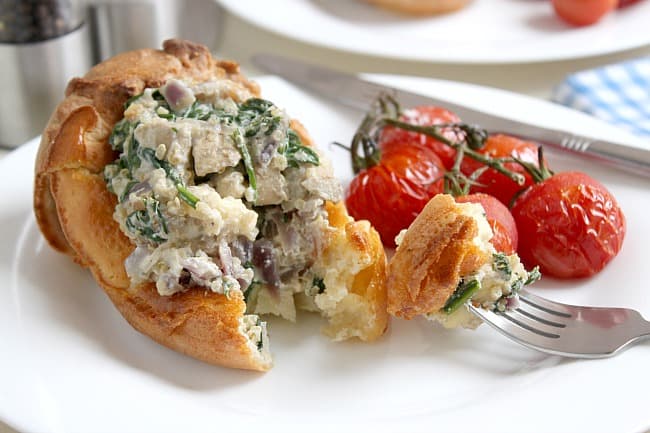 Aloha Becca! What would you recommend to replace eggs? And did you substitute cheese type, etc in same quantities as original recipe? Thanks!

Hi Jamuna, I'm afraid I've never tried an egg replacer in these and wouldn't have a clue what to advise, but I'm sure you can find a vegan version elsewhere :)

Is there any way to get this recipe in US measurements?

Hi Allison, I'm afraid I don't have the US measurements for this recipe, but if you Google each quantity it's usually easy enough to convert :)

Can't see the recipe. Please fix this as i really want to make this dish :(

Hi Maddie, just click across to Great British Chefs and you'll see the recipe there.

Where is the actual recipe for this dish? All I see is a story about yorkshires and a few pictures, but the recipe is not here. And the highlighted links take me into internet no mans land via some lame search engine.

Hi Paul, the recipe is clearly linked where it says 'over at Great British Chefs' - http://www.greatbritishchefs.com/community/mushroom-brie-stuffed-yorkshire-pudding-recipe