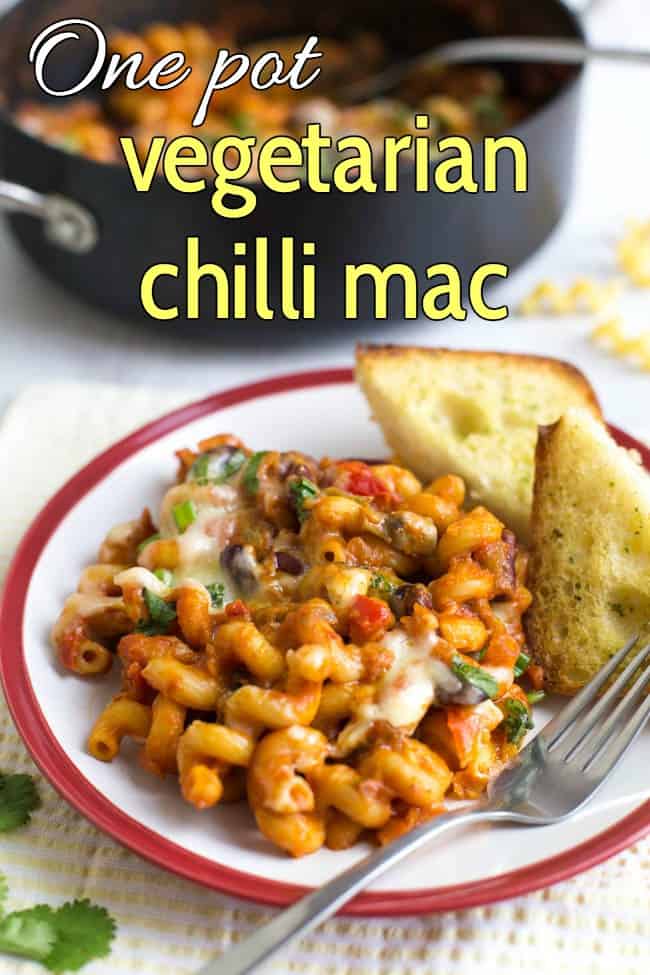 I seem to say this all the time, but wow. I think this one pot vegetarian chilli mac may well be my new favourite dinner. Soooo unbelievably delicious. Pasta, veggies, beans, cheese: it’s a full meal made in one pot, and it’s so good.

If you’re unfamiliar with chilli mac, it’s basically a cross between chilli and macaroni cheese (hence the name!). Start by making a really simple chilli, with peppers, onions, kidney beans and lots of spice. Then add the pasta. It cooks right there in the chilli – there’s no need to pre-boil. It soaks up a load of flavour from the chilli, and the starch helps to make the spicy sauce nice and thick.

And don’t forget the grated cheese, to make it creamy and gooey…

If it was possible to fall in love with a plate of food, I think this is the plate that would do it for me. 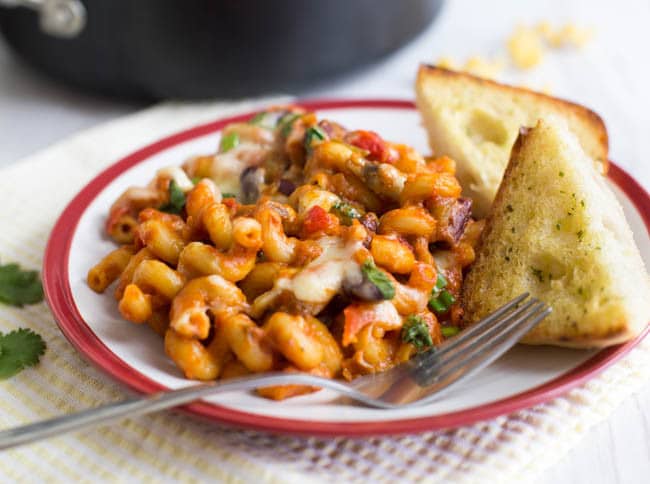 To make this one pot recipe even easier (if that was even possible), I used almost entirely ingredients from the store cupboard and freezer. No extra grocery shopping + only one pot to wash up = seriously could this get any easier?!

I started with some frozen onions and peppers from Iceland (the shop, not the country!). I must admit, I don’t often use frozen vegetables, but it’s so much easier than having to faff about peeling and chopping, which is always the worst part of preparing a meal in my opinion (especially garlic – who made the most delicious vegetable the most awkward?!). When you’re tired and you just want your dinner to make itself, using pre-chopped frozen veggies is about as close as you can get.

Frozen veggies aren’t any less nutritious than fresh veggies, as some people may think. The act of freezing seals in the goodness and doesn’t require any artificial preservatives. I don’t really know why I haven’t used frozen veggies very often in the past – I’ll definitely be using them more often in the future, no shame!

Come to think of it, I did actually make a lasagne using frozen veggies the other day and it was so much quicker than chopping up loads of fresh veg and then having to pre-cook them. I used a bag of Mediterranean-style veg and just threw them into the dish frozen. The most stress-free lasagne I’ve ever made!

Anyway, this post isn’t about lasagne. Sorry, I get a bit carried away when it comes to pasta. 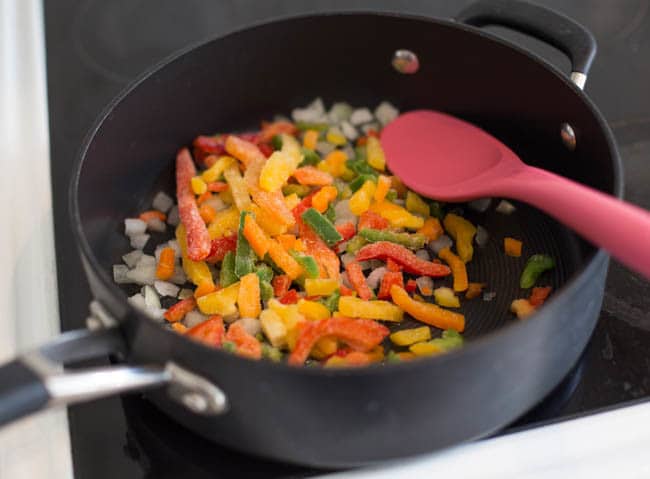 When I was in Iceland picking up the veggies, I was pretty surprised to see a whole section of the shop devoted to frozen soup. Frozen soup! I never even knew that was a thing.

I was pretty impressed by the ingredients list of Iceland’s frozen tomato and basil soup (passata, water, extra virgin olive oil, basil, salt, garlic puree… and that’s it!), so I decided to use it as a sauce in this chilli mac. I’d usually use a plain old passata, but since the soup already had some extra flavour to it, it was an easy way to make my chilli mac extra tasty.

When you first add the soup and the dried pasta to your veggies, it won’t look that appetising… but once the pasta has absorbed the spicy sauce, it becomes thick and delicious. 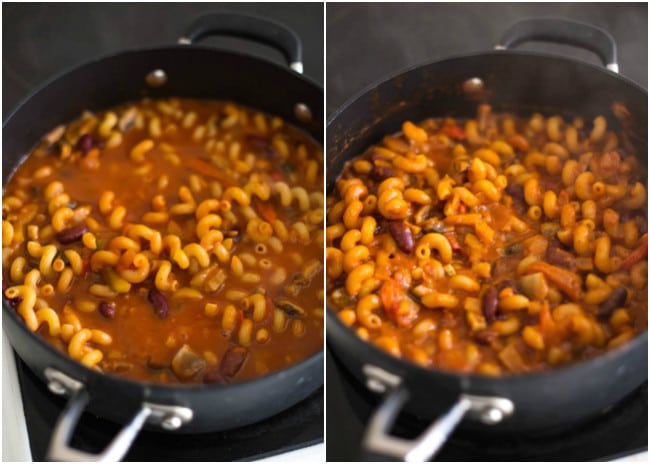 A bit of grated cheddar is all you need to finish it off to perfection! 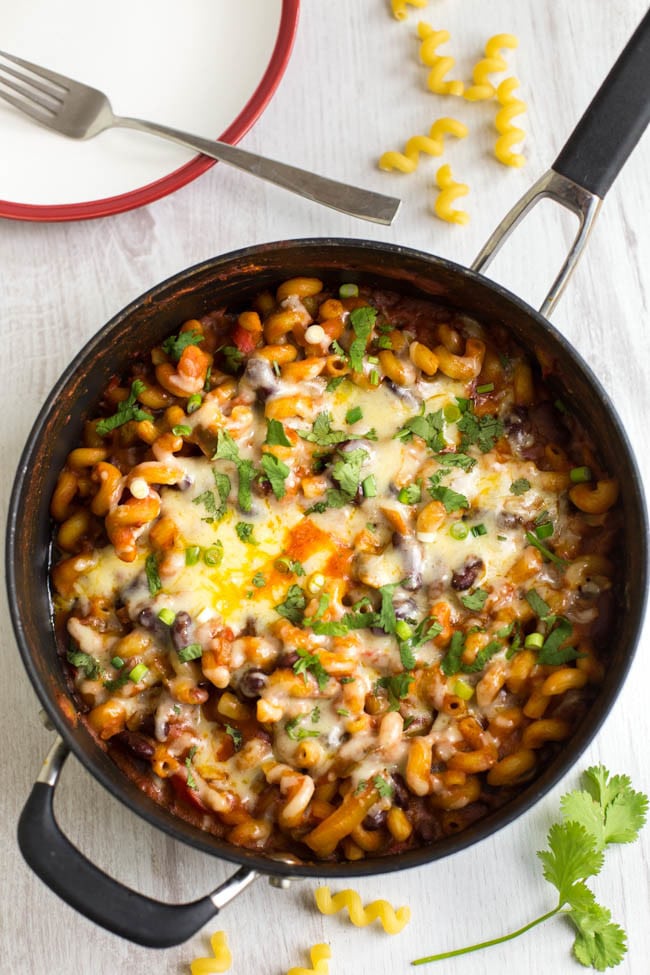 Feel free to adapt the recipe however you see fit. As I said, I used mostly store cupboard and freezer ingredients, but I did throw in a few fresh mushrooms too, just because I had some in the fridge that needed using up. Chilli is always good for clearing the fridge! I definitely wouldn’t go out and buy fresh mushrooms especially, otherwise that kind of defeats the point of it being an easy store cupboard recipe – but you can use whatever else you have in the fridge instead if no mushrooms!

Do you use frozen vegetables very often? Check out the hashtag #PowerofFrozen and the Power of Frozen website to find out more about frozen food. 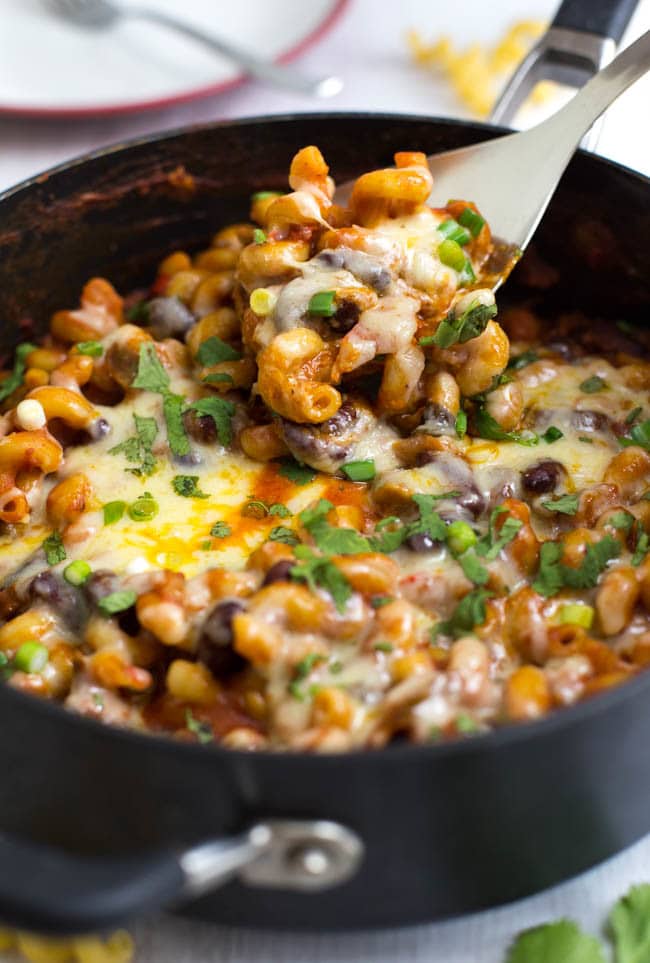 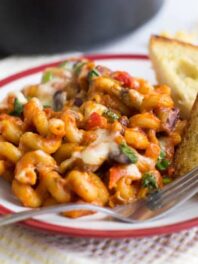 Do you think this could be made in a crockpot? I’m really asking if it could be a dump and go meal in the crockpot since I’m impossibly lazy. Ha!

Haha I haven't tried it myself so I can't say for sure whether everything would cook at the same time, but I say it's definitely worth a try :)

Super good comfort food. I added frozen corn but that was about it. Served with kale salad & coenbread. Will definitely put in the rotation. Thanks for the great recipe!

I make this recipe with chickpea pasta for less carbs and added protein. Just add the pasta a couple minutes later and a splash of liquid if it needs. This is of my favorite one pot vegetarian recipes it’s a staple in my house during the winter!

Awesome, thanks Ashley! Glad you enjoy it. Sounds like it would be great with chickpea pasta :)

Frozen veggies all the way! So easy and convenient with the same nutrients! Just found your recipe when looking for one pot meals and looks so easy. Trying this out this evening! but first Tesco for the tomato soup hehe

I think I use frozen veg more often than not these days hehe. Hope you liked it! :)

I've made this five or six times in under two months. It's so good, and so easy! I love the flexibility of it while still keeping the integrity of the original. Made a double batch tonight for extra leftovers, we can't get enough of it!

Yay, that's great to know! I really should make this more often, it's one of my favourites :)