I don’t watch a huge amount of TV, but if you were to catch me in front of the box, chances are I’d be watching a cookery program. I may be just slightly addicted – I love to watch people cooking, even if it’s not something I’d like to eat myself. Somehow I even enjoy watching people cook meat or cake, neither of which I enjoy eating. Okay, I sometimes like cake.
The best part, though, is when someone on TV cooks a meal that I just HAVE to make. I often rush straight to my laptop to find and bookmark the recipe – this is where you can find pretty much any recipe that has ever been cooked on a BBC program.
This happened the other day when watching a program called Nigel Slater’s Simple Cooking. This particular episode was called ‘Born and Bred’, and it showcased recipes that use ingredients that are just made to go together.
In this case: tomatoes and basil. I don’t think there’s much more I need to say – everyone knows they go perfectly together. This recipe is so simple, and so easy to make, that I will without a doubt be making it again. 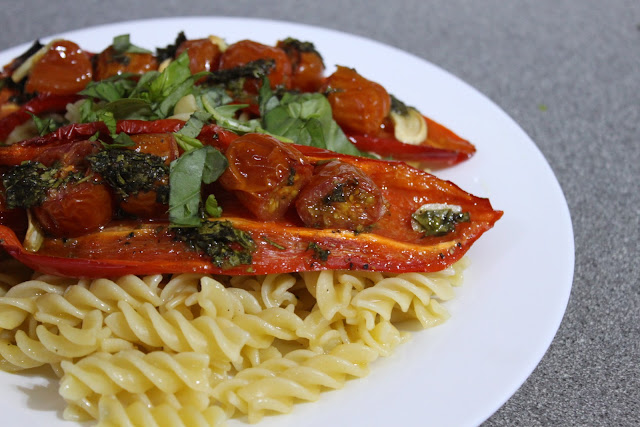 My immediate thought was that the pasta itself might be a little dry without any real sauce, but this was not the case at all – a tiny amount of the juicy vegetables was plenty. The peppers began to caramelise at the edges, making them sweet and crispy, and the roasted tomatoes were rich and flavourful. I really loved this dish. 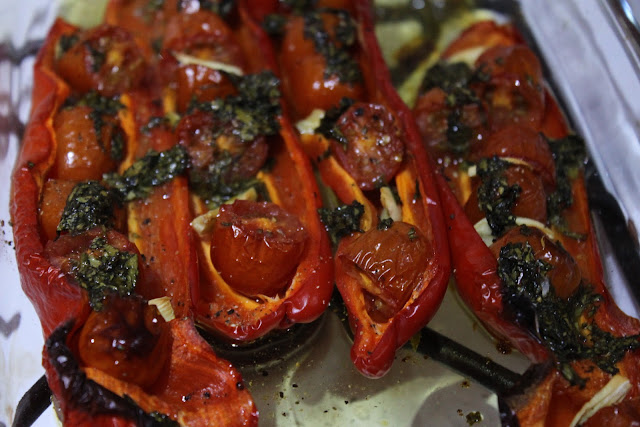 If you are interested in seeing a video of Nigel Slater cooking this dish, look here.

Roasted red pepper and tomato pasta with basil dressing
Recipe adapted from Nigel Slater’s Simple Cooking
Serves 2
2 long sweet red peppers
8 small tomatoes (I used pomodorino, but cherry tomatoes would work well too)
3 cloves garlic
100ml olive oil
Large handful fresh basil, finely chopped
200g pasta
Salt
Black pepper
Preheat the oven to 180°C (Gas Mark 4 / 350°F).
Slice the peppers lengthwise to create long boats, and lay in a baking dish. Halve the tomatoes and thinly slice the garlic, and distribute each evenly along the peppers. Generously pour over the olive oil, and bake in the oven for half an hour.
In a food processor or pestle and mortar, combine most of the basil, a little salt and a couple of tablespoons of olive oil to create the basil dressing.
Once the peppers are beginning to soften, remove them from the oven and pour on the basil dressing. Add some black pepper, and return to the oven for another 20 minutes.
Meanwhile, boil the pasta according to the packet’s instructions.
Once the peppers are soft and caramelised, remove from the oven and transfer them to a large plate, retaining the flavourful oil. Drain the pasta and toss it in the oil. Serve the pasta topped with the peppers and tomatoes and the remaining chopped basil, and a little grated cheese if desired.
Spinach and ricotta stuffed pasta shells
← Previous
Creamy ricotta enchiladas
Next →
Click here to cancel reply.