Every now and then (i.e. most days), I really can’t be bothered to spend too long cooking.

Pesto pasta doesn’t have much nutrition.

A tin of soup isn’t at all tempting.

It’s always a big issue trying to think of something to make that’s quick and easy, but nutritious and delicious at the same time.

I love making enchiladas, but they can definitely be a little fiddly sometimes. Why does it matter whether the ‘filling’ is actually wrapped in a tortilla, or if it’s underneath it, or on top of it? It all tastes the same once you’re eating it, so why bother faffing around rolling each enchilada up separately? This enchilada casserole has everything all mixed up together, which is why it’s so quick and easy to make – and it’s just as delicious.

One of my favourite things about this recipe is that it only uses one dish – less washing up! Just chop up a few vegetables and stick them in a big baking dish for a while to roast. Then add the black beans, sauce, tortillas and cheese to the same dish, and bake for a while longer to get nice and bubbly.

If you want to cut down on the cooking time, you could always sauté the veg instead of roasting them – it’s quicker, but it will mean one extra pan to wash up, and it’s a bit more effort, so it’s your call.

I used this recipe to use up some tortillas that I’d had in the freezer forever. We often freeze them since we don’t always get through a whole pack in one go. They do freeze quite well, but they’re never quite the same when they’re defrosted, so this enchilada casserole is great to use them up – they don’t need to be perfectly fresh, they don’t need to be soft and rollable. Anything will do. 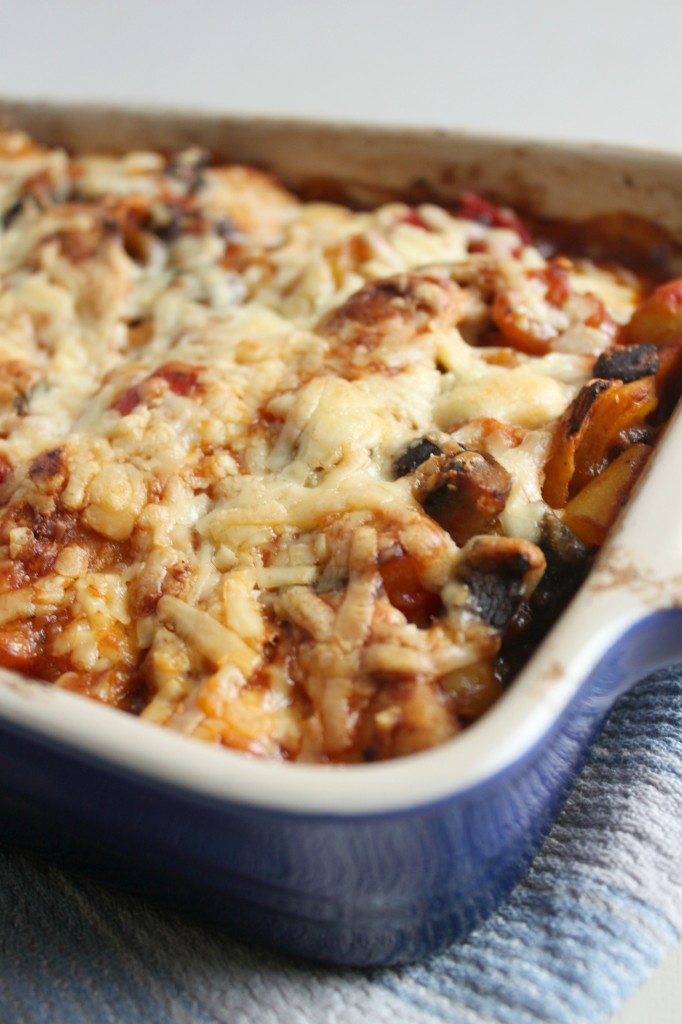 Hi, Becca! I made this last night, and my boyfriend said it's one of his favorite things I've ever made. I love how veggie-packed this is -- so low-calorie, yet really rich and flavorful! Keep 'em coming! If you could do a recipe for a veggie eggs-less benedict, that'd be AWESOME!

Ooh yay, thanks Nicki! Glad you liked it! :)

How can you have eggs benedict with no eggs?! :P

I will try this recipe. It sounds and looks very good. I did not know that zucchinis were called courgettes. I like learning something new! Thank you for this recipe.

Ah, what a lovely recipe Becca. One dish as well, added bonus. I always encounter the same problems as you mention - frozen tortillas and fiddly enchilada cooking process. Well with your recipe those problems will now be a thing of the past! Yeehah! Thank you Becca.

Oh yum, nothing beats a good veg, tomato and cheese bake, but adding tortillas and black beans takes it to a whole new level of yum!! Delicious, easy dish Becca :)