No, that's not a typo - seitan is an actual thing. It's very well-known in certain circles (that makes it sound like being vegan is an exclusive club or something, but you know what I mean), but I'd say seitan is still fairly unheard of amongst the general population. If you're not familiar, seitan is a meaty substance made from gluten, and it works really well to recreate dishes that usually contain meat - hence, a homemade seitan roast!

I must admit, I've had a bag of vital wheat gluten sat in my cupboard for a few months now, untouched. I bought it online (it's hard to find in normal supermarkets, but you can pick it up on Amazon UK here or Amazon US here) with a plan to make homemade seitan, but found myself rather intimidated by the prospect. To be fair, 'vital wheat gluten' barely even sounds like real food... so, in the cupboard it sat.

However, I had a bit of fresh sage leftover from my recent buttery tortellini recipe, and my thought process went a little like this:

Fresh sage --> sage and onion stuffing --> roast dinners! --> I should make something for a vegetarian roast dinner --> oh god, I'm going to have to face my fear and try making seitan.

In the end, this homemade seitan roast was actually much easier to make than I expected it to be! I swear every homemade seitan recipe I've ever looked at in the past has been super long, with dozens of steps, and that always put me off. But, in true Becca fashion, I cut a few corners and still ended up with a perfectly delicious seitan roast. I'll definitely be experimenting more with seitan, but for now I'm pretty happy with this recipe!

The recipe is loosely based around this one from Post Punk Kitchen. I nabbed the trick of adding beans to the seitan for a nicer texture. I don't have much to compare it to... but it was nice! Since the vital wheat gluten has basically zero flavour on its own, it's also really (really!) important to add plenty of flavour to your seitan, as well as salt! Don't skimp on the salt. Add a reasonable amount, then add another pinch. The end result is a meaty, chewy roast with a crispy crust and that lovely sage and onion flavour throughout.

Serve your homemade seitan roast with some potatoes and veggies, not forgetting lashings of gravy, and you're all set for a perfect vegan Sunday lunch. 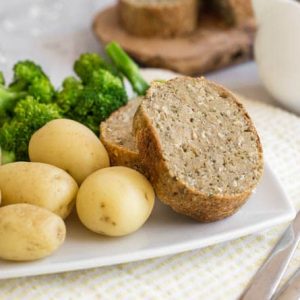 Some perfect roast potatoes to go alongside your homemade seitan are a must!