A totally hands-off method for making slow cooker baked potatoes, coated in a beautiful garlic butter mixture! Such an easy and delicious lunch or dinner.

A baked potato is such an underrated dinner! Serve it alongside something else, or just on its own, piled high with cheese, and it’s always enjoyable. These slow cooker baked potatoes are even easier than the usual version, plus they’re coated in a super tasty garlic and herb butter for extra flavour!

How to make a perfect baked potato

You might have already read my previous blog post about how I make a perfect baked potato. That’s the method I use the majority of the time, and it always makes an amazing potato.

However, even though a jacket potato is a pretty low effort dinner, the method in that blog post involves using both the microwave and the oven – so you do need to be around to do a small amount of work.

Why cook baked potatoes in the slow cooker?

Making these slow cooker baked potatoes is entirely hands-off. Once they’re in the slow cooker you can go about your day, or even head out for a few hours, coming home to a delicious potato that’s perfectly cooked and waiting for your return.

Of course, there is one minor drawback of using the slow cooker – with the slow cooker method, you don’t get the same crispy skin as you do when you bake your potatoes in the oven.

If that’s a deal breaker for you, make the oven-baked ones instead! But, I have a special way of making these baked potatoes extra tasty, so you won’t even think about the lack of a crispy skin…

My favourite part of these slow cooker baked potatoes is the garlic and herb butter that they’re coated in. It’s a very simple mixture – just melted butter, garlic paste, some dried herbs, and salt and pepper – but it adds so much flavour to the baked potatoes.

Just mix the ingredients together, and slather it alllll over those potatoes. I’d recommend using your hands for this – it’s so satisfying.

When your potatoes are thoroughly coated in garlic butter (drooool), wrap them up in some silver foil. You want them each to have their own little packet, to keep the flavour in, and allow each potato to cook right there in that buttery, garlicky, herby goodness.

I cooked three potatoes at the same time in my slow cooker – if you have a bigger slow cooker, I’m sure you could fit one or two extra.

Turn the slow cooker on for about 3 or 4 hours, while you get on with something useful (binge watching Netflix counts as useful, yes?).

You can check the baked potatoes with a knife to see when they’re ready – just poke a sharp knife straight through the foil. As long as your potatoes are all a similar size, they should be ready around the same time.

When you take the potatoes out of their little foil houses, don’t forget the extra garlic and herb butter that will have collected at the bottom! It would be such a shame to waste it, so drizzle it over the top of your baked potato – or cut the potato open and pour the garlic butter right inside.

Once you’ve cooked your delicious garlic and herb baked potatoes, it’s time to fill them!

Personally, I love my jacket potatoes served simply with far too much melted butter and gooey cheese – why mess with a classic? But there are plenty of other options too:

Really, there’s no limit to what you can pile up on your jacket potato!

Do you think you’ll try these slow cooker baked potatoes? 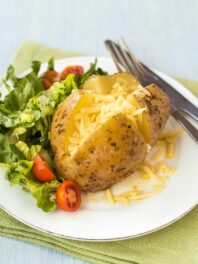 Note: Nutritional information is approximate, and will depend on exactly what ingredients you choose. Information above is for 1/3 of the recipe (1 garlic and herb slow cooker baked potato).

Don’t forget to also check out my other method for making a perfect baked potato!

I am coming back from a fun filled vacation and need something easy so will be trying this tonight! They will go wonderfully with the tomatoes I picked up at the farm stand on the way home. Thanks Becca!

Hope you enjoyed them! :)