These vegan pulled pork sandwiches are stuffed with pulled jackfruit in a rich homemade BBQ sauce, and topped with quick pickled onions - so much flavour!

Have you ever tried vegan pulled pork? Obviously, there's no actual pork involved (I've not lost my mind) - it's actually pulled jackfruit! Coated in an amazing homemade BBQ sauce, the jackfruit makes an amazing pulled pork-inspired sandwich that both vegans and omnivores (and everyone in between!) can enjoy.

Jackfruit is a fruit (surprise!) that has been commonly eaten in certain parts of the world for hundreds, if not thousands, of years - but it's only become popular in the West in the past few years.

Around the world, jackfruit is used to make all sorts of dishes - curries, salads, desserts, snacks... it's incredibly versatile! Here, it's commonly used as a vegan alternative to pulled pork.

Why does jackfruit make a good vegan pulled pork?

When jackfruit is cooked, it softens up, and you're able to 'pull' it between two forks, just like you can with cooked meat (or so I'm told, I've never actually cooked with pork!).

The end result looks a lot like pulled pork - and since the jackfruit doesn't have a huge amount of flavour on its own, it's perfect for soaking up the tasty homemade BBQ sauce.

It's been a really, really long time since I ate meat, and I don't think I've ever actually eaten real pulled pork, so I can't say how authentic this vegan pulled pork tastes. In all honesty, I very much doubt it tastes anything like real pork - it is just a fruit, after all.

Or if, like me, you have no love for real pulled pork, you can just enjoy these jackfruit sandwiches as an amazing meal in their own right.

I must admit, this isn't actually my own recipe. It was developed by Jack Stein (son of the legendary Rick Stein!) for St Austell Brewery, down in Cornwall.

The recipe pairs perfectly with St Austell's flagship pale ale, Tribute - what could be more satisfying than munching on a hearty sandwich with a beer on the side? Definitely the right way to enjoy Veganuary - no rabbit food here!

The recipe starts by simmering some jackfruit in a simple homemade BBQ sauce.

You might be able to find whole jackfruits in some speciality grocery stores, which you can then prepare and chop up yourself. But I would definitely save yourself the hassle and buy the tinned stuff instead - it's perfect for this kind of recipe. It's already pre-chopped, so just throw it in the pan, and after a little bit of simmering, you'll be able to 'pull' it.

Just spear each piece of jackfruit with two forks, and pull them apart to separate the fruit into meat-like strands.

I've always been a bit intimidated by the idea of pickling. There seems so much to learn, what with all the canning involved, and needing to leave things to pickle for months on end... It doesn't really sound like my sort of thing (I'm more into a 20 minute meal!).

Luckily, these quick pickled onions couldn't be easier. Just add some sliced red onion to a pan with a dash of water and vinegar, bring to the boil, and they're done. That's it!

I guess technically they're not really pickled, but if you want to enjoy some vinegary crunch on top of your vegan pulled pork sandwich, without having to learn a whole new skill, these quick pickled onions are for you!

They're mellower and less intense than raw onion, and have a lovely vinegary tang. It's great at cutting through the deep flavour of the BBQ sauce.

Then it's just an assembly job! A generous smear of mayonnaise (or vegan mayo, if needed), a good heap of vegan pulled pork, a few thin slices of cucumber, and some of those tasty quick pickled onions.

The homemade BBQ sauce is smoky, sweet, spicy - really rich and robust. And the tangy onions and fresh cucumber are brilliant for bringing a different texture and flavour to these jackfruit sandwiches.

The beer on the side of my sandwich is that pale ale from St Austell Brewery, Tribute.

I'll admit, I'm no connoisseur, but I loved this ale! It's got a lot more flavour than a cheapy lager, which can often be a bit watery and tasteless, but it's still light and enjoyable (I'm not a stout lover!).

St Austell have been brewing beer in Cornwall since 1851, so they really know their stuff - and it shows.

Best of all, St Austell's bottled beers are totally vegan (just like these vegan pulled pork sandwiches!). You can find it in supermarkets nationwide.

How else can I serve vegan pulled pork?

If you don't fancy making vegan pulled pork sandwiches like I did, there are all sorts of other ways you can serve your pulled jackfruit! Here are a few ideas:

Have you ever tried jackfruit pulled 'pork'? What did you think? 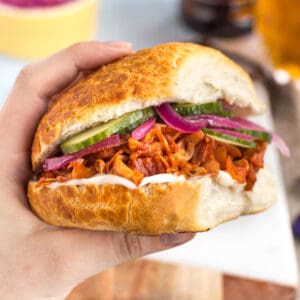 These vegan pulled pork sandwiches are stuffed with pulled jackfruit in a rich homemade BBQ sauce, and topped with quick pickled onions - so much flavour!

For the vegan pulled 'pork':

For the quick pickled onions:

Are you taking part in Veganuary this year? Here are plenty more easy vegan recipes to inspire you!