This slow cooker ratatouille is insanely rich and flavourful, and works beautifully as a standalone stew, or on pasta. Plus, it's made with 100% vegetables!

Well, plus a pinch of herbs and some salt and pepper, so I suppose technically it's more like 99% vegetables... but still, that's pretty great. And you won't believe the incredible flavour you can get from all those veg!

Ratatouille is the sort of dish that reminds you just how amazing vegetables can be, all on their own - no frills.

It's a classic French dish, and as with a lot of old, traditional recipes, there's no one 'right' way to make it - it's pretty much just a rich vegetable stew, which you can put your own spin on.

The movie Ratatouille (which was apparently released in 2007?! Where on earth have the past 15 years gone?!) focuses on a much more intricate version of the dish, with vegetables delicately layered up in perfect stripes... but that's not at all like this version. I'm not really a 'delicate' kind of cook - with this slow cooker ratatouille, you just dump everything into one pot in a beautiful, messy heap.

Why cook ratatouille in the slow cooker?

The slow cooker recipe is really quick to throw together - just chop, chop, chop (there will always be a lot of chopping...), then into the pot it all goes.

And as well as being super easy, slow cooking the vegetables also makes them beautifully soft and sweet - it makes for an incredible ratatouille.

What is ratatouille made of?

As I mentioned before, my slow cooker ratatouille is 99% vegetables. You really don't need to add much else at all - vegetables have so much flavour when you cook them well.

Veggies are not just something to stick on the side of a meal as an afterthought - they deserve to be the star of the show.

As well as fresh veggies, I also added some passata, which is basically a tomato sauce, except it's made entirely from sieved tomatoes - no other ingredients! A spoonful of Italian-style dried herbs and a good pinch of salt and pepper is all you need to finish your slow cooker ratatouille.

What vegetables can you use in ratatouille?

Technically you could put any veg you like in your ratatouille. You probably know by now that I hate the idea of 'rules' when it comes to food - if you can make a tasty meal, go for it, and don't worry about authenticity.

We're ultimately all here to eat good food, right? So if you want to stick some carrot in your ratatouille, I'm certainly not going to stop you.

However, I do usually tend stick to Mediterranean-style veg when I'm making ratatouille. The flavours all go beautifully together, and when they're cooked right down in the slow cooker, they end up so sweet and delicious.

Courgette (zucchini) also works well in ratatouille, but bear in mind that it can end up a bit mushy when cooked in a slow cooker. If you don't mind that, go for it!

As you can see... your slow cooker ratatouille will turn out pretty amazing.

Just a few hours in the slow cooker, and your vegetables will have transformed into a soft, rich stew with heeeeaps of flavour. With almost no effort from you!

As with all slow cooker recipes, there will be a little bit of excess liquid around your veggies, as it can't cook off like it can when you're cooking on the stovetop. But I certainly don't think that's a negative at all - just more tasty sauce! There's no added water in this recipe, so it's entirely made from those tasty vegetable juices.

What do you serve ratatouille with?

I pretty much always serve my ratatouille as a pasta sauce. Just stir it through some cooked pasta, top it with a bit of grated cheese, and you've got an insanely delicious, insanely easy, veggie-packed dinner.

If you prefer, you can just eat it on its own, as a vegetable stew - don't forget the crusty bread and butter for mopping up the bowl! You could also add a tin of cannellini beans to the slow cooker if you fancy an even heartier stew.

Either way, this slow cooker ratatouille is so easy to make, and will really make you fall in love with vegetables again. 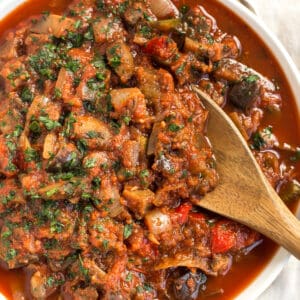 This slow cooker ratatouille is insanely rich and flavourful, and works beautifully as a standalone stew, or on pasta. Plus, it's made with 100% vegetables!