Vegetarian Paella with Artichokes and Olives

This Spanish vegetarian paella recipe is really easy and straightforward to make, and is packed with veggies! A great summery vegan dinner.

You know when you look at a word for too long, and it suddenly stops making any sense? I’ve totally done that with the word ‘paella’. It’s obviously not an English word in the first place so I think I should let myself off, but for a while there I was genuinely concerned that I’d invented the word myself. Paella. Vegetarian paella. Vegan paella. Pie-ell-aaaa. It means nothing to me any more.

Anyway, when James Villas challenged me to recreate one of my favourite holiday recipes as part of their My Holiday Dish series, my mind went straight for paella. I’ve been to Spain a few times, and it’s one of my favourite countries (it’s hard to argue with all that sunshine) – but I’ve had mixed luck eating paella in Spain. Some places are really vegetarian-friendly, offering the most amazing vegetarian paella you can imagine, piled high with veggies, beans, fresh herbs, drizzled with olive oil – a vegetarian’s heaven. Other places… not so much. I can think of one time in particular where I had to plump for a very non-Spanish margherita pizza while the rest of my family tucked into paella, because there wasn’t a vegetarian version on the menu. It’s rare that pizza is ever accompanied by disappointment, but on this occasion it definitely was.

So rather than having to search all across Spain for a suitable paella (not to mention spending 2 or 3 hours on a plane, snore), I thought I’d just make my own instead. And not to blow my own trumpet or anything (except I totally am), but it was almost as delicious as any paella I’ve ever had in Spain. For me, the stars of this vegetarian paella are the marinated artichokes and olives – both give so much flavour! Finish everything off with a squeeze of lemon and some fresh parsley, and you’ve got a comforting, but still fresh and summery, dinner.

By the way, don’t be tempted to stir your paella while it’s cooking – we’re not making risotto here. Just keep the heat low, cover the pan, and let the rice slowly absorb that rich and flavourful spiced stock. Hopefully, you’ll get some nice crispy bits around the bottom – so go and be lazy, and let your dinner cook itself.

What’s your ultimate holiday recipe – the thing you always look forward to eating when you go abroad? Let me know if there’s anything else you’d like me to attempt! And you can check out more holiday recipes on the James Villas website – including these simple pepper and goat’s cheese tarts, which look like the sort of thing I’d happily eat seven of – or using the hashtag #MyHolidayDish. 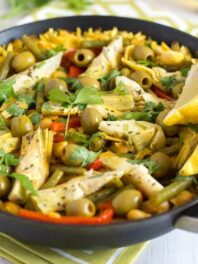 Vegetarian Paella with Artichokes and Olives

You know what you need to serve alongside paella? Sangria!! Try my peach and basil white sangria recipe:

This is the most brilliant recipe it does exactly as it says cooks in the time it says and is adaptable if you don’t have some of the secondary ingredients I.e. I substituted green beans for courgette and black olives for green still flipping’ lovely thank you Becca

Thanks so much Annie! :)

I adore paella - I felt so sad for you sitting with your pizza whilst everyone else had paella in Spain!! This dish looks incredible, I adore olives and artichokes! Bookmarked!

Haha yes I was a bit sad about that - only time I've ever been sad about pizza!

Ah I love this Becca, I really enjoy artichokes. I am also really wanting some of that peach sangria. I drooled a little when I saw it.

My tummy is crying out for this! But I am also starting to wonder if this is a candidate for a bit of slow cooker experimentation??? Am I wrong? I love using my slow cooker in this heat as it doesn't make the kitchen thermonuclear, and I can just set it & forget it!

Ooh that's a good idea! Rice really doesn't take long in the slow cooker, so you'd need to keep an eye on it otherwise it can go a bit mushy - but it's definitely worth a try!

Looks good! You know it's not pronounced pie-AY-ah though, right?

Haha yes I do, I usually sing it in a very obnoxious fake Spanish accent, but I wasn't sure if people would appreciate that :P