Yes I know, this is my second 'very veggie' recipe in as many weeks, but if you can't have lots of veggie-heavy recipes on a vegetarian blog, where can you? This very veggie mashed potato is an easy way to add extra vegetables to your diet (or your kids'!) - with broccoli, carrots and peas mashed right into the potato, it's got more flavour and more nutrients than normal mash. Serve it up with some sausages and gravy (and a few extra veg on the side if you like!) for an awesome bangers and mash.

This very veggie mashed potato couldn't be easier to make. I added fresh broccoli and carrots to my potatoes as they were boiling, along with some frozen peas - but I'm sure you could just use some mixed frozen veg instead if you're feeling super lazy! No judgement here, Lazy is my middle name (actually it's Louise, but that's basically the same thing).

I like my mash to still have some texture, so I left the skin on my potatoes and only roughly mashed it, leaving some lumps and even a few whole peas. If you're trying to trick your kids into eating more veg, just cook everything a bit more thoroughly, and mash it more thoroughly too, and the veggies will be more well hidden (though I'm not claiming they'll be totally invisible!).

You may have noticed that despite my best efforts, I tend to do the same photo styling on lots and lots of my posts - pretty much always the same background (it's actually a piece of wallpaper!), the same few linens, the same few plates and boards... and literally the same two metal forks in every post. I'd love to say this is because it's 'my style' or some other carefully considered reason, but really it's because every single other fork in my cutlery drawer has a bent prong. How does it even happen?! I have never bitten down on a fork hard enough to bend it, and I have no idea how else a piece of metal would accidentally get bent. Bent fork prongs - one of life's great mysteries.

Anyway, the point is, Robert Welch recently sent me a new set of cutlery, which was very much needed. I can't wait to get rid of 90% of my old stuff, most of which was acquired from various housemates at uni nearly a decade ago (and therefore doesn't remotely match), and replace it with a nice new set. A matching cutlery set seems like the sort of thing an adult should possess (next up: matching plates and bowls!). I chose the Radford set in a 'satin' finish, so I no longer need to worry about you seeing my reflection peering out at you from a spoon - the number of times I've had to edit my face, half hidden by a camera, out of a photo is quite enormous.

The cutlery is beautifully designed with smooth curves, and has a reassuring bit of weight behind it. I love the satin finish - it feels more modern to me, and so far it also seems to show fewer water marks, which is a plus considering I never do any drying up!

Robert Welch also have some little children's cutlery sets, which are flipping adorable. Just like the adults' sets, but charmingly small. Eden's still in the stage where she throws down her spoon like a mic drop after every mouthful (you ate from a spoon, girl - it's not that impressive), so I might save these until she's just a little bigger! But it's pretty cute to be able to dish up a mini meal alongside its own little mini cutlery - and this very veggie mashed potato is perfect for kids and adults alike.

All you need to add to this very veggie mashed potato is some vegetarian sausages, and you've got the ultimate veggie bangers and mash. Just don't forget the gravy! 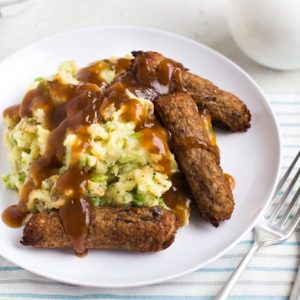 An easy way to get more veg into your diet - add them to your mash! Much more flavour and more nutrients than normal mashed potato.

Note: Nutritional information is approximate, and will depend on exactly what ingredients you choose. Information above is for ⅕ of the recipe.

Want another use for your frozen peas? Make muttar paneer masala!