The Commonwealth Games are starting in Glasgow next week! I’m not really into sport on a day-to-day basis, but when something big comes along like the Commonwealth Games (or the Olympics, or even the World Cup), I do get a bit drawn in. When else can you watch people jumping into water very beautifully, or rolling a ball very carefully towards another ball? (no sarcasm intended, I find it fascinating!)

So, in honour of the Commonwealth Games, I thought I’d make a recipe (because that’s all I know how to do).

When I think of the Commonwealth, several countries spring to mind. The UK, obviously, but also Canada, Australia, and two countries that produce some of my favourite foods - India and Bangladesh! South Asian food is always incredible, and it’s got a huge number of options for vegetarians - saag aloo, paneer cheese, samosas, onion bhajis... you can’t beat it.

To be honest, a tikka masala is actually a British creation masquerading as an Indian curry - it’s even been called our national dish! But, since the UK is obviously in the Commonwealth too, I figure it’s okay. Totally counts. And since people say it was invented in Glasgow, it’s even more appropriate for this year’s Games!

I don’t make curries very often - they sometimes feel like a bit too much effort after a long day working. But the truth is, they don’t have to be! This weeknight tikka masala can be whipped up in only about 20 minutes, so it’s perfect for those days when you can’t be bothered to spend hours in the kitchen. By the time your rice has cooked, the curry will be ready too.

I must admit, this is definitely a cheater’s version of tikka masala. Really, the ‘tikka’ part of the name refers to something (usually chicken) that’s been marinated in a spicy yogurt - but, marinading something for hours on a weeknight is a bit more than I have the energy for (ain’t nobody got time for that). So really, this weeknight tikka masala is more like a ‘tikka masala-style curry’ - it’s not authentic, but tastes very similar.

I used Quorn chicken-style pieces in my curry, but you can use whatever protein you prefer - paneer cheese, chickpeas, or even chicken if you're not a veggie. Go mad.

So, will you be watching the Commonwealth Games over the next couple of weeks? I’ll be rooting for both England and Wales, but I haven’t decided yet who I’ll be putting my money on! 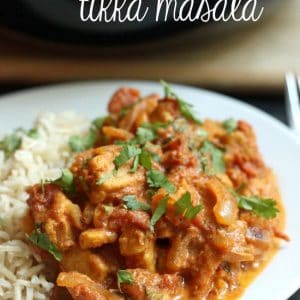