I know, soup for breakfast seems a little odd. But hey, fruit soup as a concept is a bit odd to begin with, so let's just go with it.

I don't usually buy frozen fruit, but in an effort to have more healthy ingredients on hand for those times when I feel like there's nothing in the house (surprisingly often, considering how regularly I go to the supermarket), I thought it seemed like a good idea to have a bag or two in the freezer. I only bought them a few days ago and I'm already loving it! They're so handy for breakfasts, smoothies... and soup, apparently.

Inspired by the incredible combination of plums+cinnamon, I thought I'd try blueberries+cinnamon next, and I think it might actually be eeeven better. With the amount of flavour that's in this blueberry soup, you wouldn't believe it only had 3 ingredients.

I served my blueberry soup topped with a good dollop of Greek yogurt - anything is totally acceptable for breakfast as long as it's topped with Greek yogurt, yes? Kind of the sweet equivalent of throwing a fried egg on something and calling it breakfast.

If I've still not convinced you that soup for breakfast is a-ok, you could always simmer your blueberry soup for a little longer to make it more like a blueberry compote, which you could serve over pancakes, waffles, porridge, or whatever else you crazy cats like to eat for breakfast. My next batch is 100% going to be served over ice cream (though perhaps I'll wait until dinner time for that one). 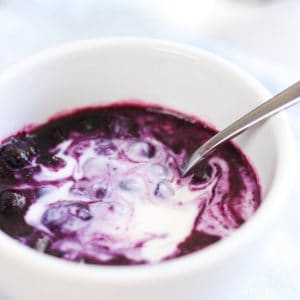 Note: nutritional information is approximate, and will depend on exactly what ingredients you choose. Information provided is for soup only, no toppings included.